It’s been three weeks since I was invited to brunch at the Cavalier in downtown San Francisco, hosted by Tablehopper Marcia Gagliardi and the Food Should Taste Good (FSTG) snack food brand. It’s never too late to write about great food, right?

The brunch was part of FSTG’s national promotional tour that’s been challenging star chefs, like the Cavalier’s Jennifer Puccio, to make inventive dishes featuring FSTG’s products. Obligatory disclaimer! The brunch was entirely free. The invitees were a fun mix of new media types in a variety of industries, and we were thrilled to be ushered into a reception in Marianne’s Room, a speakeasy-style nook concealed from the restaurant proper and full of lush red furniture and saturation-drenched artwork. 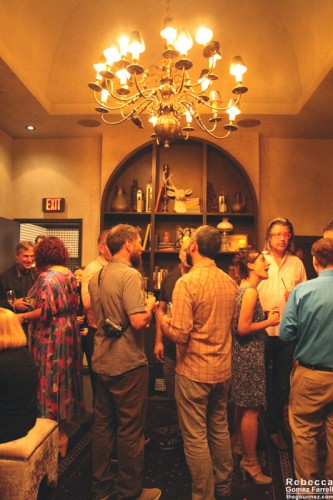 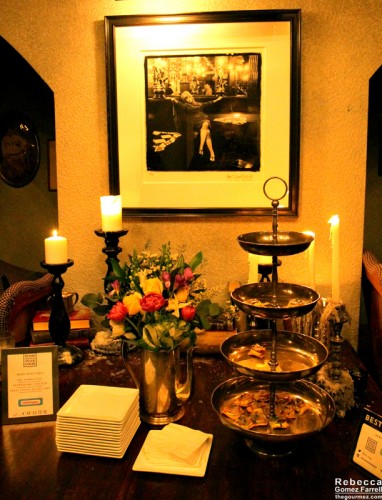 As we mingled, Bloody Marys and Pimm’s Cups flowed. 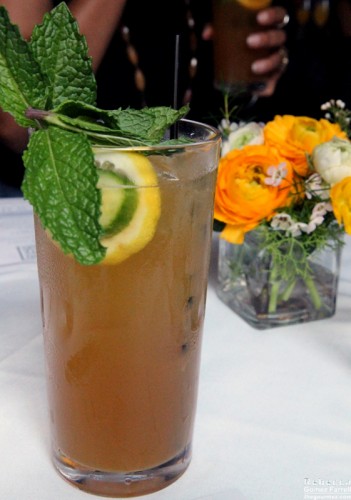 Our expectations rose with our hunger; the Cavalier was a semi-finalist for the James Beard Best New Restaurant award last year, after all. Light appetizers included FSTG peppercorn crackers topped with deviled egg salad, provolone, and pickled jalapeno and FSTG’s “the works” chips with smoked salmon, avocado, spices, and sprouts. 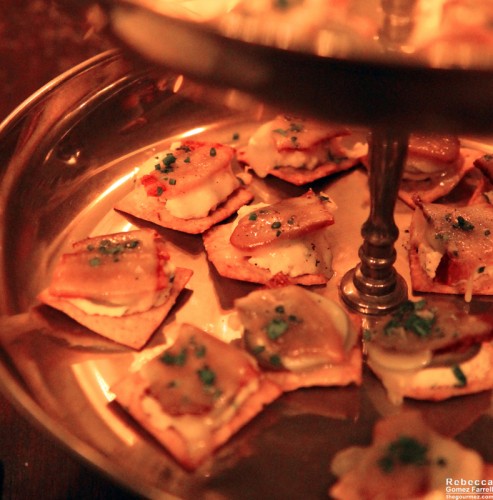 Both provided an appeasing nibble before the much heavier—and mouth-watering-delicious—roasted garlic and cheddar fondue appeared. 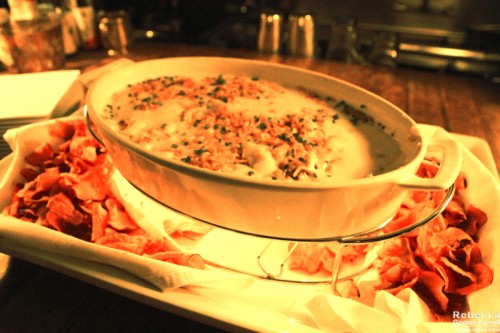 The fondue was served with FSTG sweet potato kettle chips. While great on their own, the chips weren’t really large enough to hold up to fondue dipping. But that didn’t stop us from making messy attempts to scoop it all out anyhow. Hot cheese! Must eat hot cheese!

I just proved how refined I am, didn’t I? Marcia did a much better job at that, speaking a few words about how the brunch menu came together before introducing Chef Puccio. 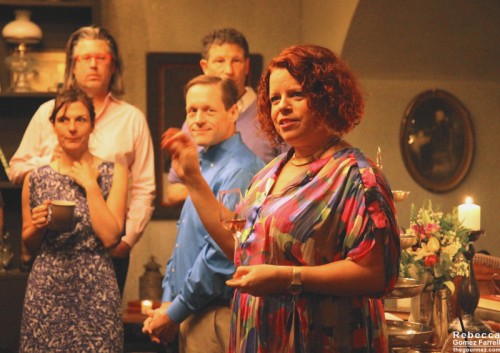 We learned the menu was a collaboration between the two women, most notably in Marcia coming up with the idea of making a shaksuka from FSTG’s falafel tortilla chips. 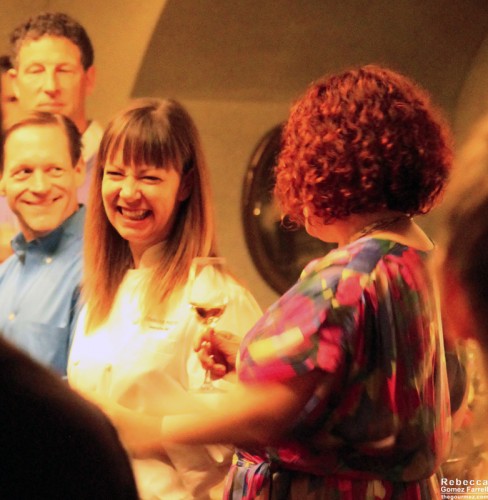 After those words from our hosts, it was time to eat! I swooned over the gorgeous centerpieces—I pretty much swoon over all flowers. 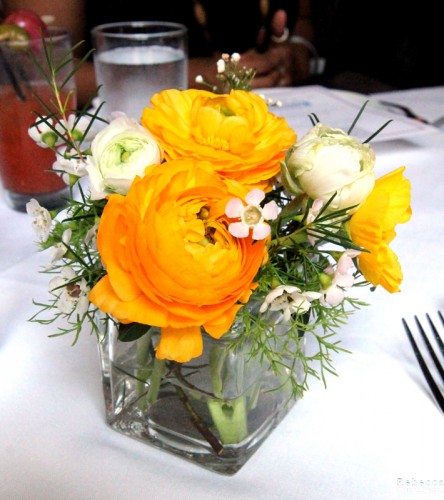 The star of the brunch menu was indeed the shakshuka. 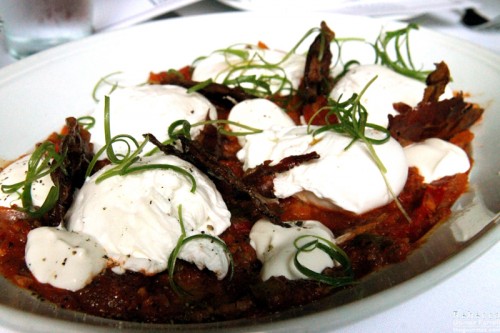 I’d never had a shakshuka before, and this definitely inspired me to have it again in the future. It’s similar to chilaquiles in that it’s a spicy egg dish combined with some sort of bread. Traditionally, that would be a North African flatbread cut into strips, but the chef used the falafel tortilla chips for this one, capitalizing on falafel and shaksuka’s shared region of origin. The use of chips is where the similarity to chilaquiles ends. The eggs are poached rather than scrambled or fried, and they come atop a tomato-rich stew full of vibrant flavors alongside crispy pancetta and yogurt dollops. The chips were not crisp; rather, they were integrated into the stew, providing a grainy texture that gave it more substance. I loved it, and it’s plenty filling all on its own.

Which made the rest of brunch more of a challenge for me to enjoy! It was a selection of the Cavalier favorites including their ham and cheese soldiers that have brought them much acclaim. They come with a mild hollandaise as a dipping sauce. 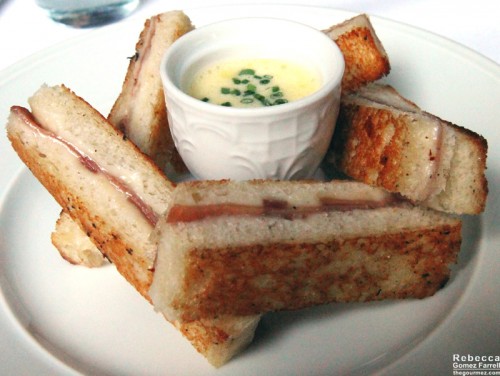 The soldiers were quite greasy—too greasy for me in all honesty, though I imagine they’d make for amazing hangover recovery food. The fruit plate, drizzled with a mint and honey syrup, was more up my alley. 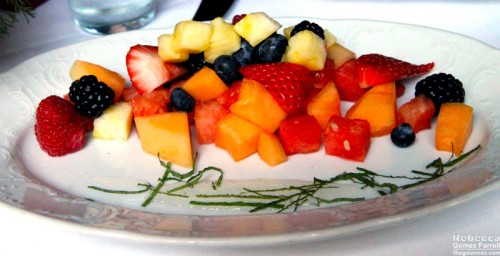 Despite being full, I couldn’t say no to anything the Cavalier served up, and there was plenty more! 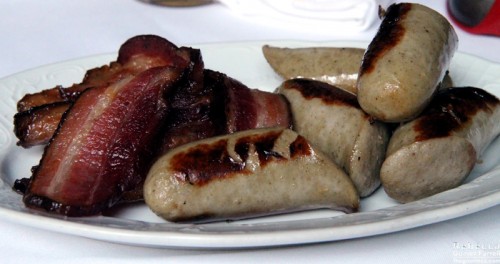 Meat lovers would love that plate of thick bacon and bangers. I can confirm the Cavalier makes a great banger, but I prefer my bacon crisp. 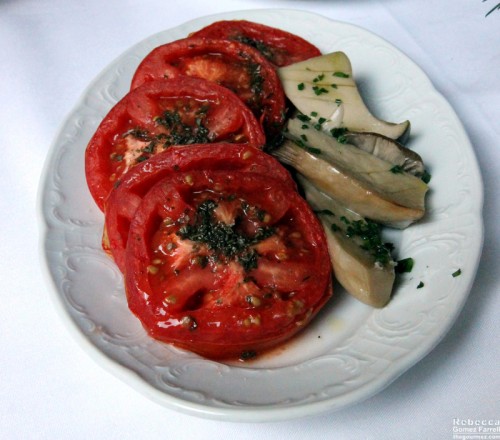 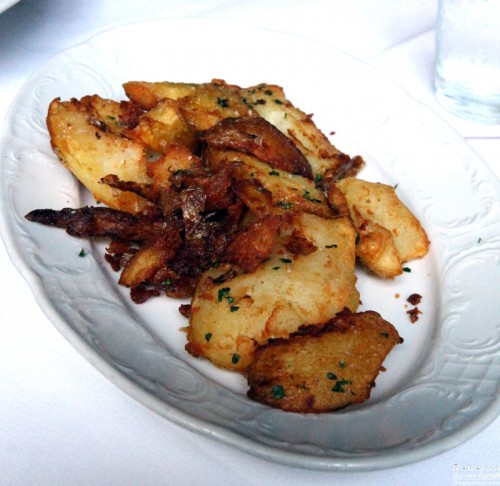 I adored the roasted tomato slices, complemented with a sprinkling of salt and herbs, but the potatoes needed more seasoning for my palate. Everyone seemed to enjoy the thick, roasted mushrooms. 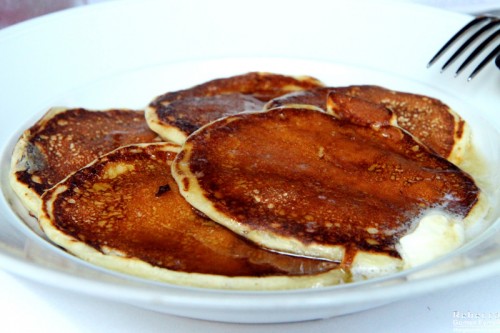 There was no skimping on the amaretto and brown butter syrup that went with the buttermilk pancakes, and the pancakes’ fluffiness soaked it and the butter right up.

Whew. I’m full again from just looking at those pictures. Brunch at the Cavalier reminded me that I should only partake in an English-style breakfast if I’ve been on an accidental liquid diet—they are so rich and swimming in extravagant calories. The British do not skimp on their grease and butter! Despite the acclaim the Cavalier’s regular menu has received, however, the shakshuka is what really left an impression on me. That, and the samples of FSTG’s upcoming Real Good Bars. You’re going to want to stock up on the macadamia chai version of those when they’re released—trust me. The Real Good Bars are made with the simplest of ingredients, but they will give any candy bar on the market a run for their money in indulgence.

I’ll be reviewing FSTG’s line of crackers in my next post. Thanks so much to the FSTG team, Marcia Gagliardi, and the Cavalier’s staff for a memorable meal and the chance to meet other new media types in the Bay Area. When the DSLRs and camera phones break out before each course, I know I’ve found my people.

2 thoughts on : Food Should Taste Good Brunch with Tablehopper!