I’m doing two reviews in one today! My friends over at TOPO Distillery have debuted their organic Eight Oak Whiskey, and they were kind enough to send me a bottle for review. This fortuitous gift also provided me with the perfect opportunity to test out a set of Sipping Stones, soapstone cubes designed to provide a slight chill for drinks on the rocks that you don’t want to dilute. And yes, I also received them free to review (obligatory disclaimer alerts!). 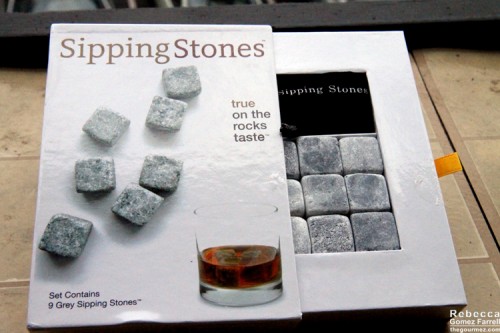 Why not try them together, I thought. So I did. I made sure the Sipping Stones were chilled for a good day, as the instructions suggest, and then set to tasting. 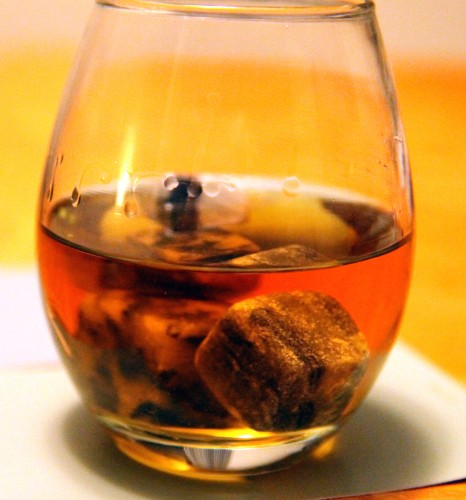 Now, those stones are an obvious conversation piece on their own, providing a lovely, eye-pleasing addition to any chilled beverage. So is TOPO’s Eight Oak bottle that comes with a piece of whiskey-soaked wood at the bottom—and yes, you should suck that wood for all it’s worth when you reach the end. 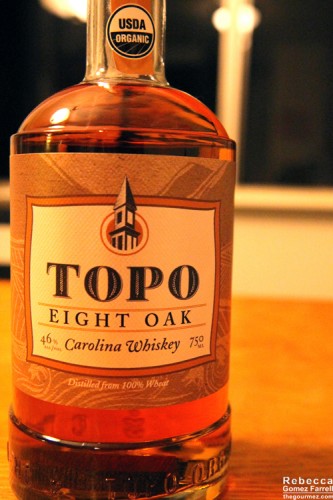 But I’m getting ahead of myself. Let’s start with the savoring, not the gluttonous sucking, yes? I’ve come to expect quality from TOPO Distillery, which is based in Chapel Hill, North Carolina. They make spirits with sophisticated character including their unique vodka, a clear liquor that is often utterly forgettable but smooth and pleasantly sweet in this case, and their subdued Piedmont Gin, one of the few gins I genuinely enjoy in a cocktail.   2/20 Correction: Oops! I got that process wrong. Esteban McMahan, TOPO’s Spirit Guide, informs me of what it really is:

The Eight Oak refers to the eight combinations of three oaks (one American and two French oaks) and toasts that we use (one has a high vanillin content). We’re using techniques that have been used in the wine industry for over 100 years and it enables us to get a flavor that is simply unattainable using a single American oak barrel.

Thanks, Esteban, for clarifying that for me! And now back to the review…

The color is a beautiful peach-amber with a golden horizon. 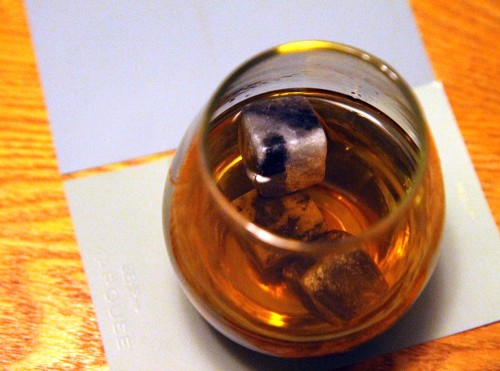 It smells amazing: vanilla salt-water taffy, pepper, and a touch of star anise. My nose hairs can feel every percentage point of its 47% ABV, meaning I’m already doubting that this is the best spirit to try Sipping Stones with because I may need the ice dilution to drink it!

The Stones instructions suggest leaving the beverage alone for a few minutes so the Stones can provide a chill…and after about ten minutes, it’s about the temperature it would be if I stuck it in the fridge for that long. So a slight cooling effect is provided, but definitely not as much as ice would provide. But with that ice, the flavors would also be harder to detect—a few drops of water is what most people recommend for blossoming whiskey and bourbon flavor profiles, and room temperature is actually better for picking up on those profiles as well. So it’s a gamble on whether to use real rocks or ice ones for this whiskey. Do you need your drink cold? Then opt for ice. Do you want to better appreciate the whiskey’s character? Try the stones. Otherwise, maybe chill the whiskey itself for a while and add the stones to prolong that effect without overly masking the flavors.

The whiskey tastes of white pepper and the cozy feeling that comes from a warm fire. The vanilla is present in the form of a Nilla wafer slowly dissolving on the roof of my mouth, and the rest of the flavors play on my tongue. It’s intriguing…but not the most pleasurable sipper for me. Too strong!

Okay, I broke. I added two ice cubes. The dilution helped immensely in drinking the whiskey by dimming the pepper to drinkable levels. A vanilla-caramel flavor is its most prominent note served on the rocks.

So what did I learn from sampling both products? The whiskey is too much for me on its own, but I could easily see it shining in a fancy version of a classic cocktail like a sidecar or manhattan. Its many elements of flavor from all those oak barrels would likely provide such drinks with fantastic depth. And the Sipping Stones look awesome in my cup, but I think I prefer the chill of ice. Yet I can’t help but think that a cocktail is also where Sipping Stones would shine, as the ingredients would already be shaken to a chill and I certainly hate it when my cocktails get too watery or too warm…

Yep, it’s a time for a new cocktail recipe from the Gourmez! I’m pretty proud of this one, and I think it shows off what both TOPO Eight Oak and the Sipping Stones can do. Here are the ingredients: 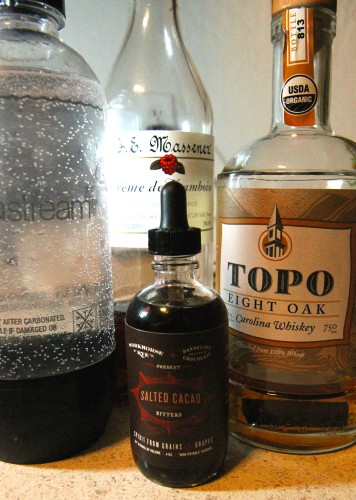 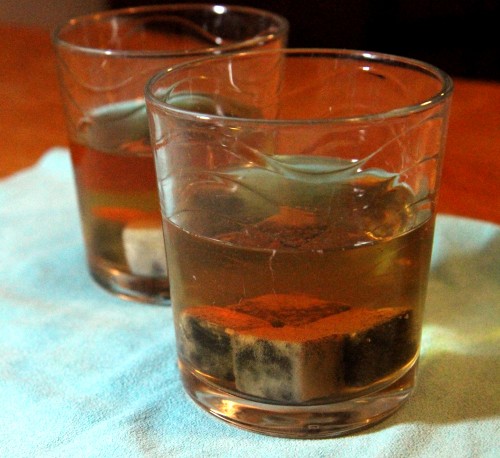 Shake up the first three ingredients then pour them into a tumbler. Fill with equal parts lemon-lime soda. Enjoy over Sipping Stones cubes! Yield: 1 drink.

The Verdict: I don’t know how I got it in my head that this whiskey might go well with strawberry, but I’m glad I did, because it made for a cocktail that my husband declared amazing. You don’t want to use too much framboise because the lemon-lime soda will also be sweet. Ginger ale may work well if you want a livelier mix.

The bitters, which unify the potentially disparate whiskey and framboise ingredients in this drink, are from a new start-up in San Francisco that aligns as well in principles as it does in flavor profiles with TOPO Distillery. Workhouse Rye makes their salted cacao bitters from their organic Bay Area rye whiskey and Sutton Cellar’s red wine barrels in combination with almonds and tangerine peel. The cocoa beans and nibs come from fellow Bay Area company Dandelion Chocolate, which sources its chocolate from sustainable and single origin farms.

All in all, this cocktail gives the whiskey a chance to show off its stuff without overpowering the rest of the ingredients, and the Sipping Stones do indeed provide a good amount of chill without dilution. Enough to replace ice? For a straight spirit on the rocks, maybe not, but for keeping your cocktail cool without losing its complexity? Absolutely. Plus, they look so purdy!

TOPO Eight Oak and Sipping Stones both earn a chicken from me.

Interested in purchasing your own Sipping Stones? You can get them right here: