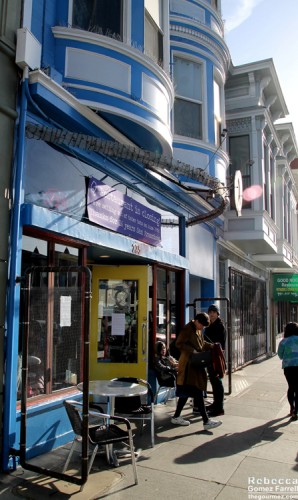 I didn’t know that Q Restaurant would be closing when I planned Mac & Cheese Night #2. It proved fortuitous that I chose it as my next stop on the list as their macaroni and cheese will soon be no more, along with the rest of their jazzed-up comfort food menu. If you want to try the cheesy goodness for yourself, you’ve only got until this Sunday to do it!

It’s a shame they’re going, because any restaurant that takes the time to hide Waldo in their fake tree is a restaurant I can support. 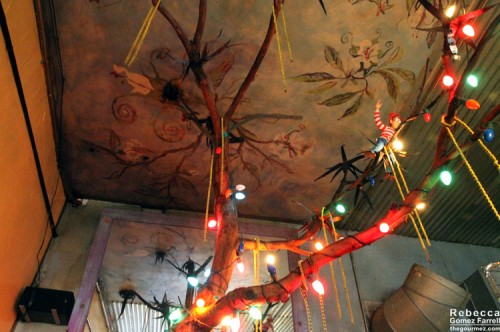 The whole interior is playful, though the walls are becoming covered in farewell messages from their loyal patrons. 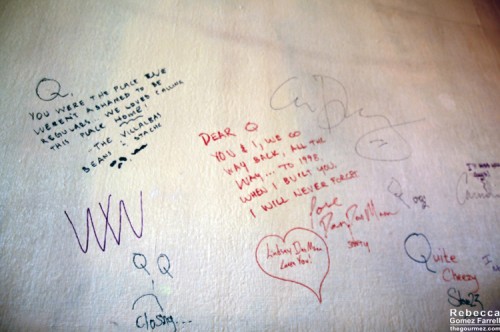 Enough of sad news—you’re here for the mac & cheese! 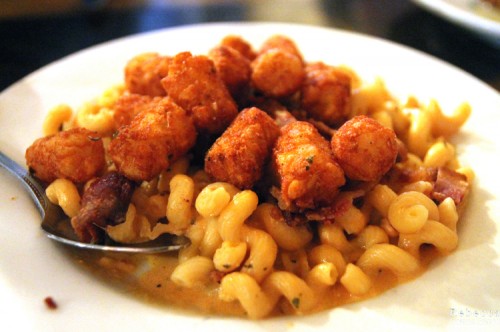 Cheese: Cheddar, swiss, and asiago. They made for a saucy, tangy combination.

Creamy vs. Stringy: Creamy, assuredly. Strangely, the sauce held a hint of tomato. But I’m the only one who tasted that, so I’m probably just having a stroke or something. No biggie. Plus, I liked it.

Noodles: Cavatappi spirals for more whimsy! They were cooked past al dente but not overcooked, unless you’re one of those people who thinks any pasta not al dente is automatically overcooked. Snob.

Breadcrumbs: Instead of breadcrumbs, Q’s macaroni and cheezy (their name for it) comes with tater tots on top! I was surprised to like the combination—I expected the tots would just add mush to the dish, but because they were extra crispy, they provided great crunch.

Grease: None noticeable. Not sure if that’s good or bad.

Verdict: I ultimately thought this mac & cheese was overpriced. A larger helping would have won me over—what you see in the photo is served on a flat plate, so it’s really just a single layer of noodles. Flavors were good, and I’d qualify it as an upscale version of mac & cheese in a box, which isn’t at all an insult. Box mac & cheese is amazing! The bacon teetered on the edge of being overcooked and didn’t add much other than being, you know, bacon, so I’d leave it off in the future…if there were a future. Oh, Q, don’t go. I just found you! Stay with me, if only for your desserts! 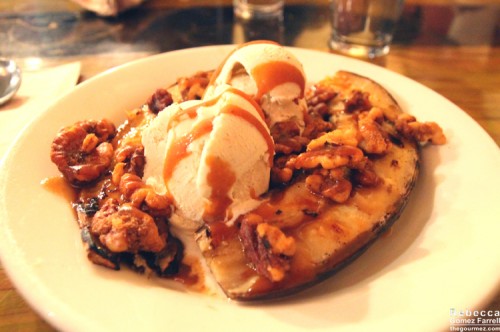 That beauty is a grilled banana served with caramelized walnuts, chocolate and caramel sauces, and Double Rainbow vanilla bean ice cream for $8. It’s also a simple dessert, but unlike the mac & cheese, I felt it was worth every penny. The banana was grilled to warm, mushy perfection and everything went so well together. I need to try and make that one myself. 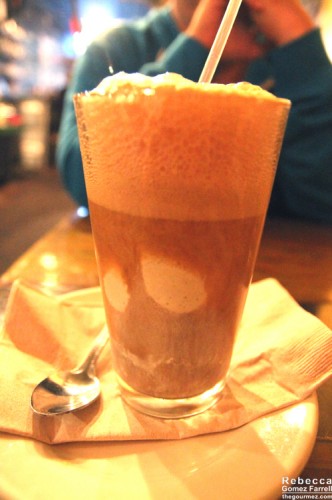 I should also mention the delightful, if misleading, cornbread appetizer with jalapeno relish. 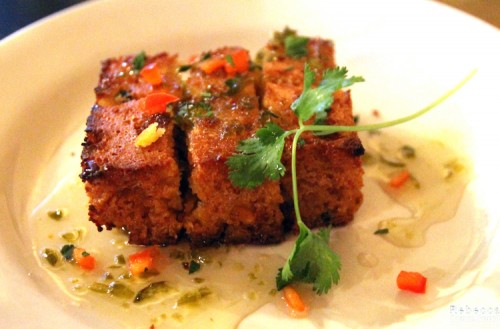 We expected multiple squares of cornbread with jelly on the side, as you might imagine. But instead, Q fries one cornbread square and drenches it with the tasty, sweet jelly. It was delicious and inventive and I highly recommend it. Just don’t expect it to feed the table!