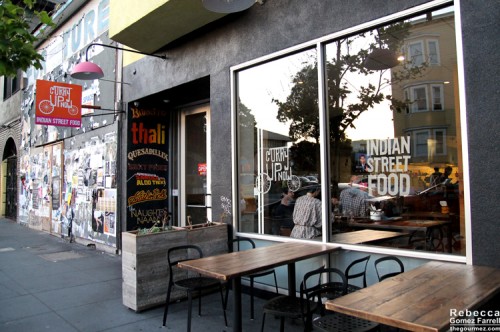 Curry Up Now! pulled us in for dinner with their lively logo, colorful chalkboard menu, and energetic vibe coming from their patrons. 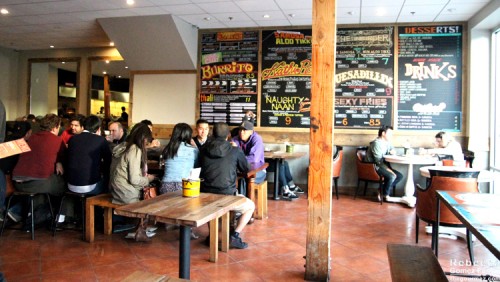 It’s a counter restaurant serving Indian-Mexican fusion, and if you’ve followed my blog for any length of time, you know I love experimentation. They play with the primary breads of both cultures, resulting in burritos filled with tikka masala, open-faced naan sandwiches, or aloo parantha quesadillas.

They have a variety of mango lassi though surprisingly no straight salty option. I had the mint mango. 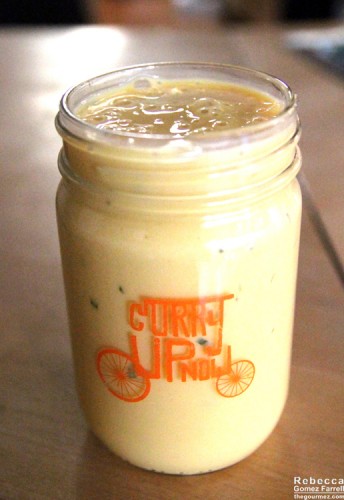 I loved the extra effervescence the mint lent, enhancing the mango’s fruitiness. It was on the thin-side for lassi, but I can’t help but think that’s good for the waistline. It tasted great regardless.

The husband and I split a couple of dishes. 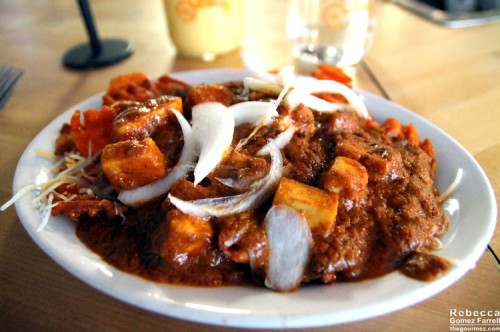 Above is a full order of the sexy fries, which are waffle-cut sweet potato fries topped with cheese and your choice of filling in a tikka masala sauce–we opted for paneer. The sauce had a medium level of heat that stuck around throughout the dish and it was delicious. The cheddar cheese formed an appealing crunchy crust above the fries. The fries themselves, however, were the least exciting part of the dish. I think I’ve been suffering from an overabundance of sweet potato everything for a while, so I found them bland and not functional for scooping up sauce. Think more poutine than cheesy fries.

Our second choice was the deconstructed samosa, which I’d describe as more of a samosa explosion than a deconstruction. 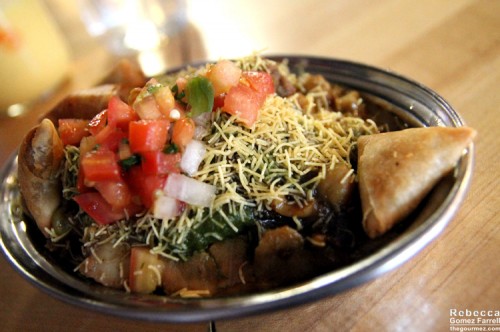 That’s not a complaint—it was quite fun to eat! What amounts to a split-open and mashed samosa is covered with extra garbanzo beans and chutneys. We opted for beef as a filling. The cilantro chutney was exceptional, and getting a quartet of mini-samosas with the order was a fun bonus. While they certainly added to the presentation, the type of chaat served on top was flavorless and melted in your mouth rather than crunched. The pico de gallo did not go well with the rest of the dish, but I appreciated the spice it added. Not sure we got the beef we ordered, though! I didn’t miss it until hours later when I realized there should have been some.

Do I think either of our choices were perfect fusions of cuisine? Nah. But they sure were creative! And the individual elements of each were quite good; they just didn’t always blend together. What we had was successful enough that I am definitely going back again…probably to try the quesadilla or the naughty naan. Apparently, this store is one of three Curry Up Now! outposts, which means those of you in Palo Alto and Mateo should also be excited. And they have a food truck making the Bay Area rounds as well.