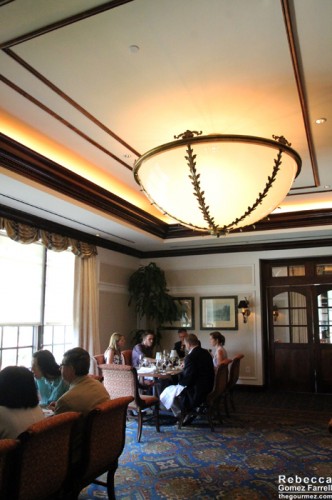 An event room at the Inn, where this meal was held.

Over the past year, I’ve had the pleasure of previewing the seasonal menus at the Washington Duke Inn multiple times. I am absolutely biased at this point, because the staff at the Inn has been amazing each and every time, from the waitstaff to the executive team (that means you, Don Ball, Danielle Kaspar, Wendy Shannon, Bobby Gorham, and Deana Marrell!).  This year actually marks the twenty-first year of employment with Washington Duke for both Bobby, Director of Restaurants, and Deana, Director of Human Relations. Deana, on the right in the photo below, remarked that she perpetually feels like she’s only been with the Inn for five to seven years at most. 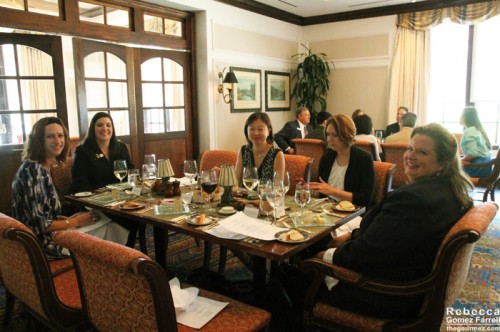 Of course, Jason Cunningham takes top billing at these events as he’s the chef who prepares phenomenal new dishes for the Fairview Dining Room, the Bull Durham Bar, and the Inn’s catering services that highlight North Carolinian farms and food producers and use quality ingredients from elsewhere when appropriate.  It honestly makes me sad that this is the last time I’ll be able to give my readers a sneak peak of the menu. I don’t think flying bloggers out from California is likely in their marketing budget. But if it is, you know how to find me, guys. *wink wink* 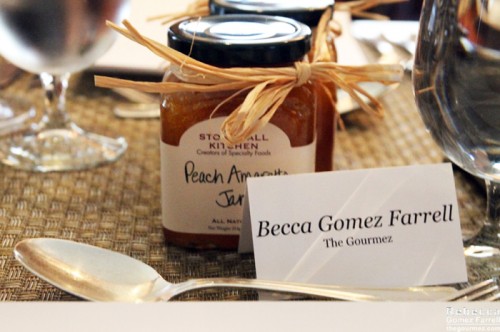 Alas, my last name card at the Inn.

Enough sentimentalism. It’s time to eat! Our first course, titled “Lush,” was a quartet of goodies all available as the Spanish gazpacho item on the dinner menu. 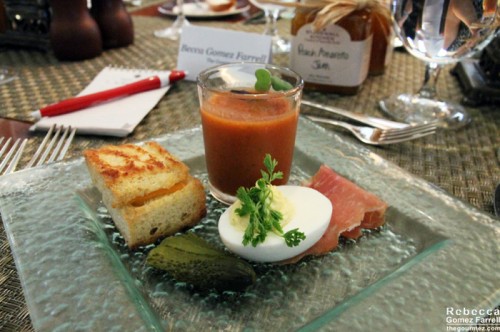 The presentation was cute and inviting. On the left is pictured a brioche grilled cheese bite with Mahon cheese. That underwhelmed me (see, I’m not completely biased!) as the brioche swallowed up the slim cheese slice, though I heard praise from my fellow bloggers. But the rest of the appetizer course was delicious, especially the deviled egg. Its preparation was traditional, relying on nicely balanced mustard and vinegar, which served as reminder of how amazing the classic deviled egg can be. The gazpacho itself was strong on the garlic and heavy on the pepper, both qualities I never complain about. A stronger cucumber presence would have been appreciated, though, but the amazing Johnston County prosciutto more than distracted me from that deficit.

“Ripe” was our second course, pairing American red snapper with a salad featuring the baby kale from Cottle Farms that I raved about last time. 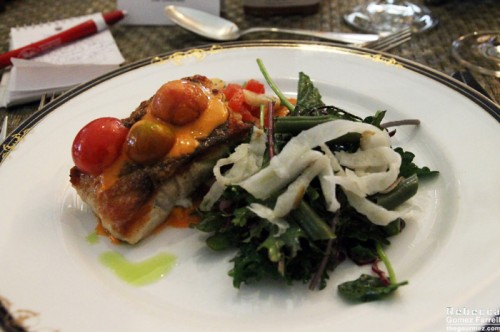 I thought the salad’s dressing was understated when it was featured in the spring, but I had no such qualms this time around. Perhaps the lemon was increased or perhaps the blue lake pole beans complement the greens more than I thought the cannelloni did then. Whatever the change, the salad was great. But the spiced watermelon and jicama slaw served with the fish was amazing. Despite their textural similarity, I wouldn’t have thought to pair watermelon and jicama. They are fantastic together, especially when dressed with the light sauce with a subtle punch that also matched well with the succulent fish. 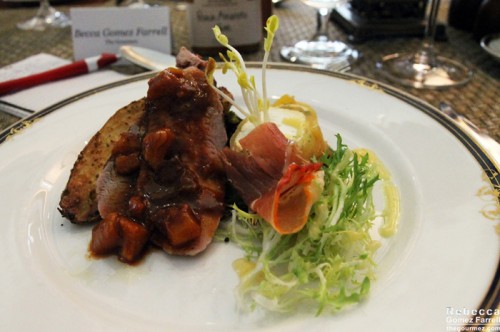 Now, you’ll have to humor me here, because I honestly thought this presentation was supposed to resemble a prehistoric paradise—you know, those islands with a bubbling volcano, lush jungle, and a lusher valley with a river running through it? Perhaps if you look at it from this angle? 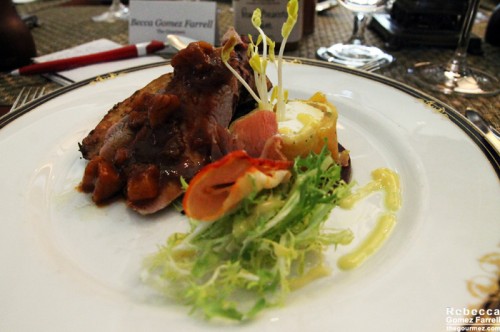 Maybe picturing a pterodactyl flying above the pea tendril trees would help? Or just humor me and accept that I thought it was incredibly imaginative. Or maybe that’s me who’s incredibly imaginative. Either way, that river of smoked-paprika-rubbed Serrano ham stole the limelight from all other island inhabitants and brought life to the frisee valley. I’m pretty sure I could eat that charcuterie all day, strip by strip. The beet salad was tasty all around, though I think it’s a bit heavy on the goat cheese, but I think that often of goat cheese dishes. The beets themselves were excellent. The pile of mustard greens hidden beneath the volcano—er, I mean the pork—made me a mustard greens believer by striking a delicate balance between al dente and overcooked, making the greens much tastier than how I usually am served them, cooked to bits in broth. The thin cut of pork pleasingly reminded me of the tri tip slivers I grew up on in Santa Maria, but Chef Cunningham informed us that the entrée version of the plate uses a full pork chop, which I’m sure would be heaven for the meat lovers among us. The expertly prepared herbed fingerling potatoes were also worth noting.

I’m pretty sure I didn’t imagine the sparkly dessert presentation. Each “Balmy” offering was quite different from the others, and each was worth trying. The pistachio frangipane purse with garnishes of swiss meringue, pistachio cream, and orange blossom ice cream, was the most outwardly impressive. 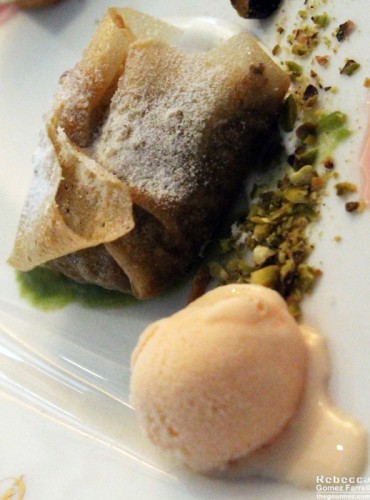 Inwardly, it was remarkably similar to baklava in taste, though the flakiness was limited to the purse of pastry. I liked it more than baklava, but I’m an absolute sucker for pistachio in dessert. To catch my attention, the ice cream would need a stronger orange blossom presence.

Prettiest dessert goes to the chocolate mousse with cherries, featuring a flourless cake with a hint of ancho chiles and a Cheerwine syrup. 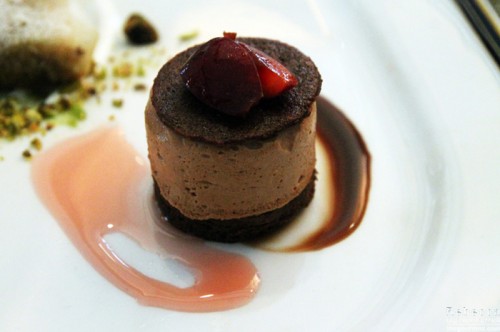 It tasted great and went down fast, but the dessert that sticks out most in my mind is the blackberry shortcake with blackberry-vanilla coulis and a cream made with kaffir limes and white chocolate. 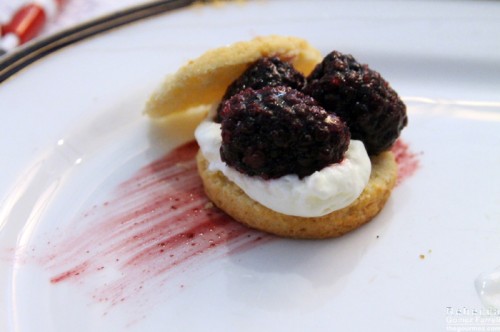 The lime punch perfectly complemented those ripe, juicy berries while the white chocolate enveloped them gently. Sugar crystals on top added a delightful crunch to the shortcake. I may need to go to the Bull Durham Bar before the move to indulge in that dessert again.

Once again, I had an excellent lunch at the Fairview Dining Room, and the Washington Duke staff and my fellow food media members always make engaging dining companions.  I am grateful for the opportunities I’ve had to partake of Chef Cunningham’s talented, inventive, and refined dishes, and I cannot wait to root him on during this month’s Fire in the Triangle competition. Good thing I’m not judging his night!