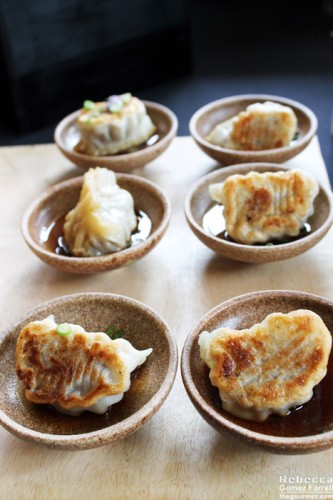 When An’s (2800 Renaissance Park Place, Cary) promotional team invited me to a blogger night to sample some cocktails and appetizers, I was thrilled. An’s beautifully presented dishes, photographs of which are always on rotation at the RDU baggage claim screens, have tempted me for years, but I had not managed to visit the restaurant before. So the opportunity to try their fare for free (I see you, obligatory disclaimer!) was a chance I couldn’t pass up. 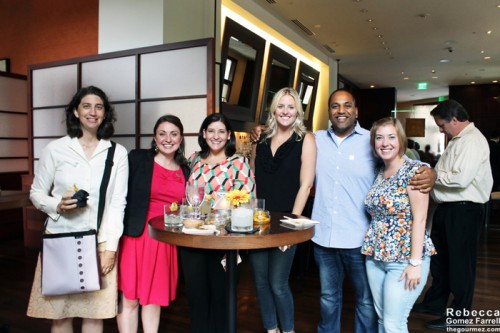 And I wasn’t the only one.

Members of the Triangle food media (including representatives from Taste Carolina, Cary Magazine, and Visit Raleigh in the above photo) gathered in An’s attractive bar, and a driftwood-inspired presentation set the mood for a relaxing reception and light selection of appetizers. 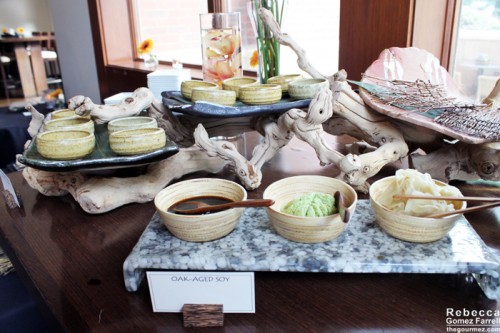 My favorite was perhaps the most conventional choice, but it was done in a manner that made it feel new to me. 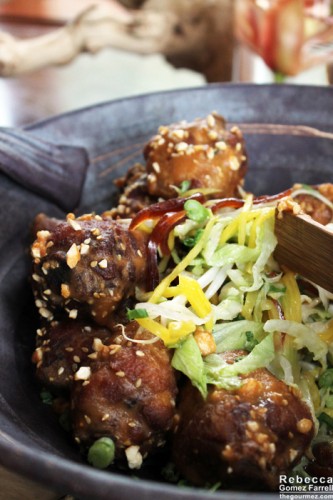 Those giant osso bucco wings are rolled in crushed cashews and served with a tamarind dressing and a delightful mango slaw. The combination of tangy tamarind with the sauce’s sweet heat and the nuts’ crunch bathed my mouth in contentedness. I am only slightly ashamed of using such flowery language for that food description—it was that good.

Each sushi roll was beautiful. 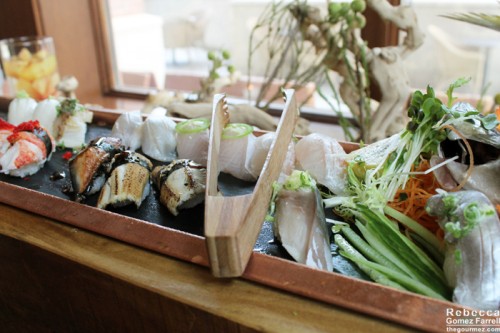 I tried three, and all tasted fresh, leaving the fish to shine mostly unvarnished.

It may have lacked presentation in comparison with the rest of the appetizers, but the oysters chawan mushi with seaweed caviar on top was my second favorite offering. 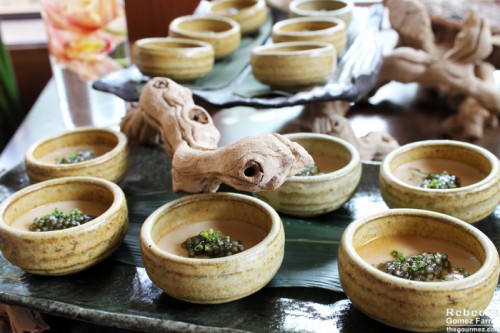 I’m not a huge fan of oysters, so I didn’t expect to enjoy this cold Japanese egg custard that hid a cooked oyster underneath. The textures were playful, the custard resembling a condensed creamy soup that rested on top of a lighter sauce. These small slurps were packed with savoriness.

The hamachi tartare, topped with tapioca crackers, fermented barley, mango, trout roe, and a yuzu and white-soy sauce, made for a quick bite that incorporated a million fleeting flavors. 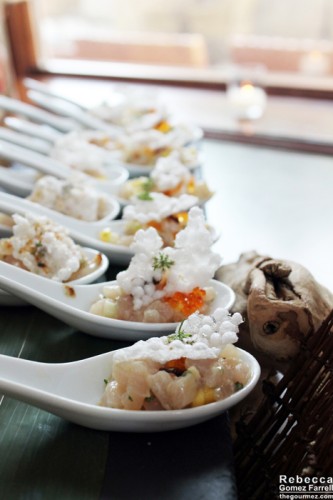 I’d have never been able to tell you what was in those soup spoons on my own.

Surprisingly, the lamb bacon sliders were the least impressive appetizer for me. 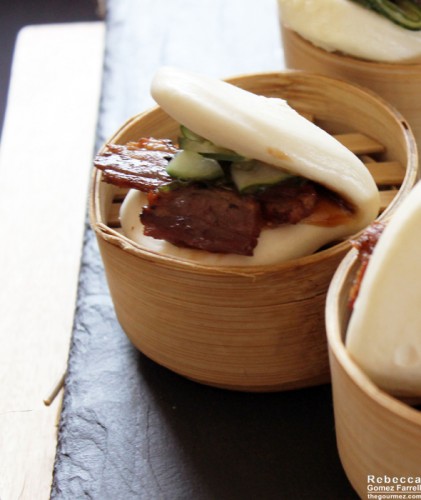 I say surprisingly because everyone else adored them. The lamb’s strong flavor was alluring and the Vietnamese profile of the accompanying veggies was on point, but I thought the use of steam bun for, well, the bun was too inventive for its own good. My brain could not wrap itself around the disconnect between a sandwich roll expected for sliders and the unique chewiness of a steam bun.

Even more surprising was that the star of the night was the cocktail nuts served on the tables along with pickled vegetables. 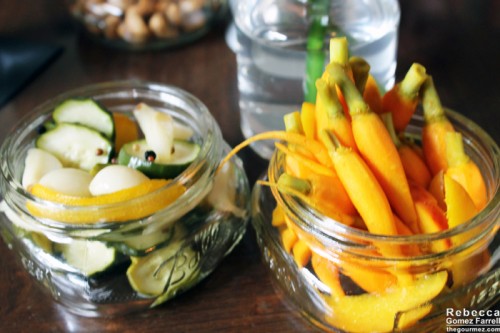 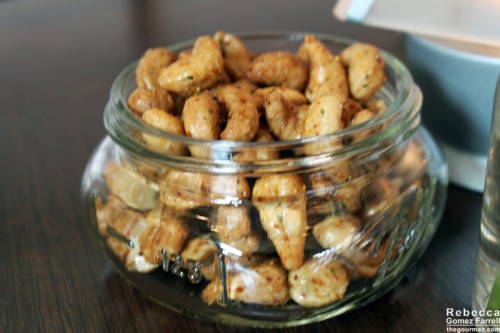 The nuts in question.

Those nuts were amazing. Chef Steven Devereaux Greene explained that they are tossed with shichimi togarashi, a Japanese seven-spice blend that makes for an addictive, fiery combination. It’s worth a drink at An’s just for the excuse to eat those. 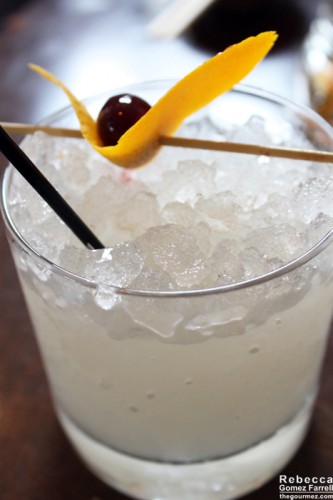 Did you like that segue into cocktails? There were two on the menu this evening: a simplified mai tai, pictured above, and a lemon ginger drink with rum. I would consider the mai tai closer to a classic daiquiri, served as it was without a mai tai’s traditional orange or grapefruit presence. The cocktail’s stripped-down ingredient list was crowded out by all the crushed ice—An might want to consider using the currently trendy hunk of ice cube to serve this drink. It would better preserve the character of the ingredients.

The second drink was ideal for summer, mixing up mellow citrus, tangy ginger, and just enough sugar to make the alcohol go down smoothly. 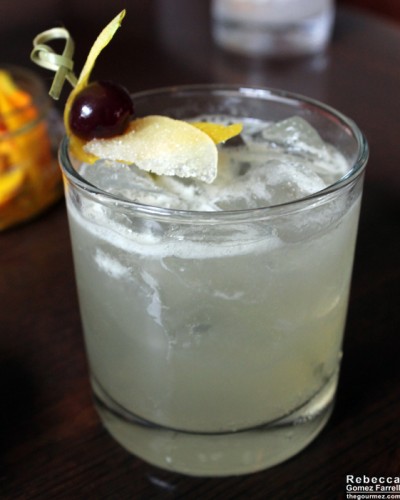 I could see it being quite popular as a patio choice that’s refined enough not to generate frou-frou drink embarrassment. Or do only I suffer from that affliction?

We weren’t let go without dessert, of course. Francisco Almaguer is the pastry chef at An, and all three selections he prepared would hit the spot for a pleasing end to a refreshing meal. The crowd favorite was the green tea crème brulee. 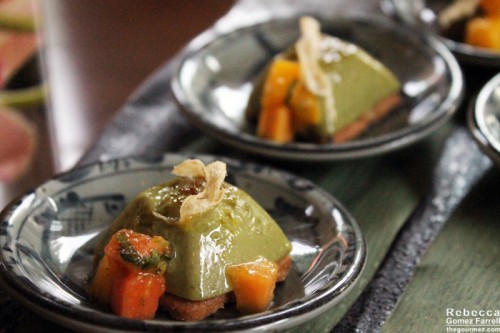 While it was plenty tasty, I’m burnt out on dessert custards no matter the flavor, so I preferred the other two options. The almond financier had the perfect inner-moisture to outer-crunch ratio for me. 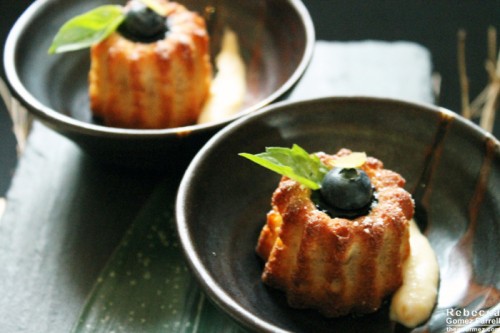 It wasn’t overly sweet, either, but I would say all the desserts achieved that feat. I appreciate it when restaurants know how to parse out sugar rather than let desserts swim in it.

The yuzu and Meyer lemon tart was best of the bunch for me. 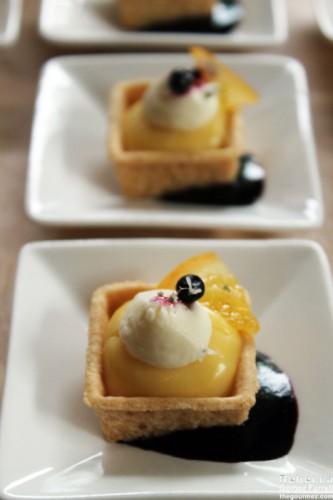 I know a tart seems tame for my taste buds, but that fleeting floral from whatever topped the white chocolate mousse infused the whole tart with a little something special. I would say that’s a talent both Chef Devereaux and Chef Almaguar have in spades. 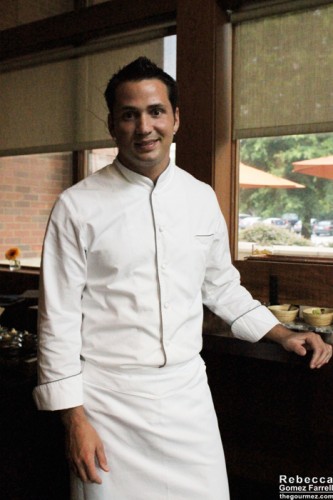 Most of the food we tried was elevated by the attention to detail they pay to layering flavors. It leaves my tongue curious and me happy when my usual ability to pick out the individual ingredients of a dish is stumped. I would love to explore what else is offered at An for that challenge, but because I’m moving soon, I hope these fabulous food bloggers can do it for me. 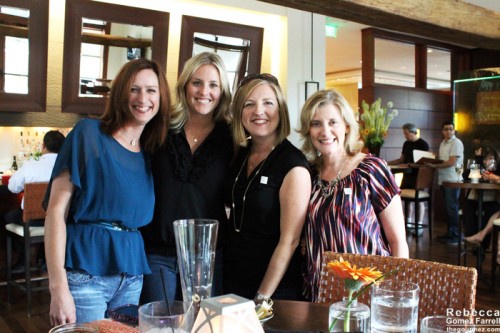 If you think that was an excuse to show off that picture, then you’d be right. In that photo is Johanna of Durham Foodie, Allison of Green Olive Media who organized the event, Chana from Raleigh What’s Up!, and Leigh from Hines Sight. Thank you, Allison, for introducing me to An’s cuisine and giving me one more chance to hang out with the fantastic food-media members we have in the Triangle.