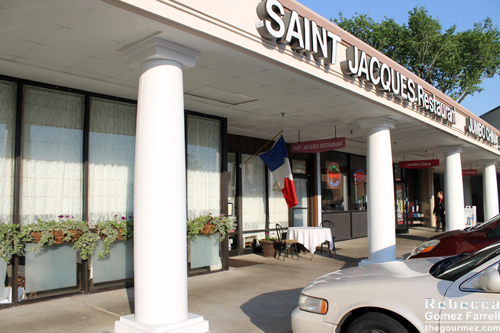 Saint Jacques is not cheap, but it is my favorite fine dining experience in recent memory, by which I mean since winter or so. My memory is that bad, I promise. Regardless, Saint Jacques is an oasis in a North Raleigh strip mall. Cream and dark brown walls work with lovely window dressings to create a beautiful light box effect for the dining room. 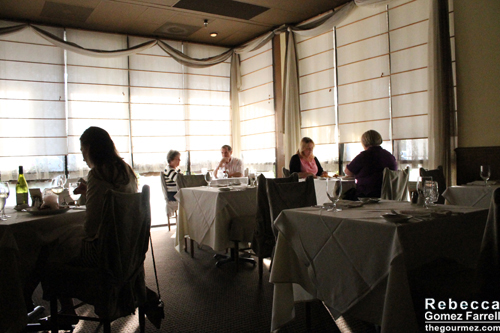 The service is white tablecloth. All the “may I thisses” and “may I thats” are a bit much for me, but I do appreciate a filled water glass. Diners maintained a pleasant level of conversation without being loud on this evening. The food is a creative take on French cuisine, starting with the amuse bouche of red pepper and goat cheese mousse. 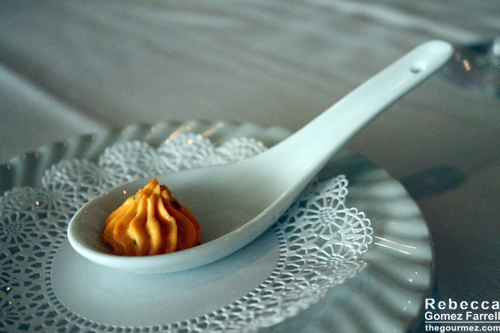 The garlic and chives in the mousse made it pop.

Three different varieties of bread were offered next. The salted focaccia’s crust had an ideal crunch from its olive oil wash. It was heavy on the egg yolk, giving it a hearty, rich flavor. The rosemary bread was soft, chewy, and had a lot of flavorful semolina on the crust.

Diner #1 had the foie gras two ways for her appetizer. It was pan-seared and “served on a confit tomato and caramelized melted sweet onion tart, finished with our port wine reduction alongside our homemade smooth chilled ‘au torchon’.” She is a huge foie gras fan, never passing up the opportunity to order it, and she loved its sear in this dish.

Diner #2 had the goat cheese gratin served on crostini over an arugula, apple, walnut, and grape salad with a pomegranate vinaigrette.

There was too much salad and too little goat cheese for her preferences, but she also likes younger goat cheese and found this aged one too pungent. But she thought it’d taste fine for someone who likes aged goat cheese.

Diner #3 had the coquille Saint Jacques, which features scallop and rock shrimp in a mushroom mornay cream sauce over a light potato gratin. It reminded her of a dish she’s had several times that relies on mashed potatoes to hold in the seafood and sauce, and she was delighted that shells were used to do the holding instead. The delicate mornay cream sauce was a plus.

Every bite of my gorgeous bacon and bleu cheese torte was delicious. 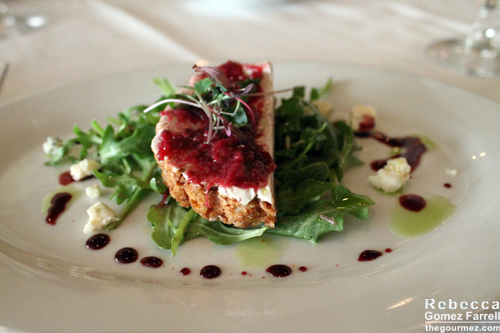 The creamy, lush blue cheese mousse made for tangy combinations with the exquisite blackberry and roasted shallot gelée and the perfectly seasoned arugula salad. The bacon was only in the torte’s crust, but it had a strong, smoky presence anyhow. The port wine caramel sauce was my favorite part. Its flavors tasted condensed but weren’t overwhelming, and it combined very nicely with the arugula’s dressing.

A palate cleanser of mango and lavender sorbet came out next. 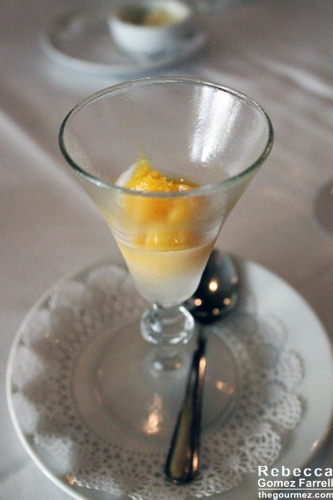 Its two strong ingredients were perfectly balanced, though I found it a tad too sweet overall. It did effectively cleanse our palates for the entrees.

Diner #1 had high praise for the black grouper with lemon and avocado aioli and a pine nut, crab, and tomato risotto. She thought the accompanying chilled salad was too similar to coleslaw or a pickle, but she loved the rest of it.

I had the crusted sea bass with a crab and shrimp mousse. 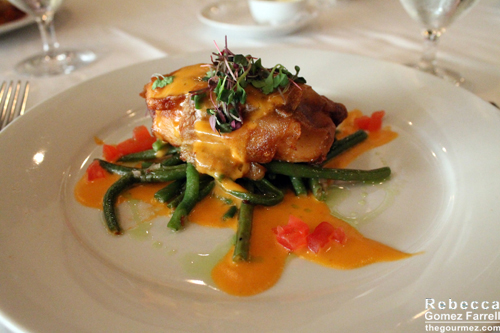 The mousse was thinly layered over the fluffy fish, and they were cooked together in a potato crust that ultimately gave the impression of breading rather than potato, which was unique and contributed to the extra moist fish. The deliciously light tomato beurre blanc sauce was just sweet enough to offset the fried potato, and the green bean almondine beneath it all was delightful. The dish was slightly too oily and I wanted more of that mousse, but I was pleased.

Diner #3 had the roasted poulet rouge with crispy skin served over a potato and carrot coq au vin ragout. 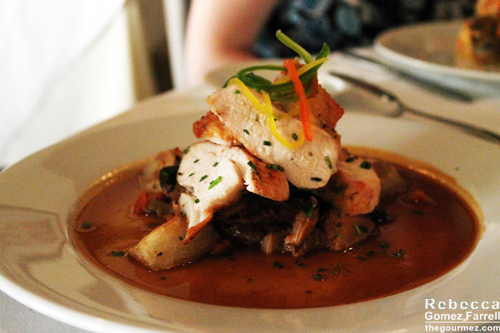 She thought the variety of chicken meat used was fun, with sliced breast meat served over the pulled dark meat in the ragout. The advertised crisp skin was disappointingly soggy, however, likely because it sits in the sauce.

It was horseradish-braised beef short ribs over a parmesan-barley risotto, roasted baby carrots, and a red onion marmalade for Diner #2. 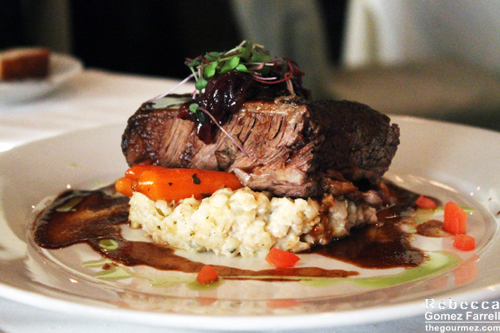 I was sad I didn’t end up ordering this dish because Diner #2 reported that the horseradish was barely noticeable, and that was what put me off from it. The short ribs were tender, and the risotto again received compliments. However, the red onion marmalade did not appeal to either diner who tried it. But when a beef dish can make my mouth water with jealousy, it’s worth noting!

I ordered an espresso with dessert. 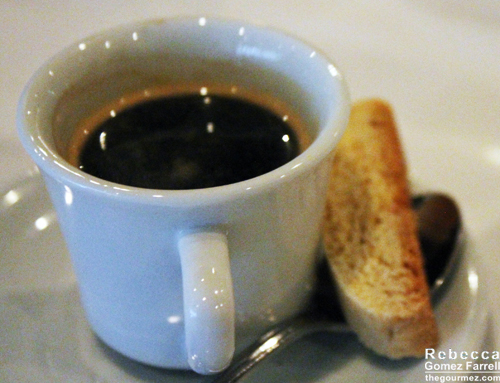 It came with a simple shortbread biscotti that hinted of anise. The espresso itself was average, but dessert assuredly was not. Three of us tried the lemon millefeuille, which featured lemon mascarpone mousse alternated with phyllo that had been caramelized with brown sugar and walnut powder. 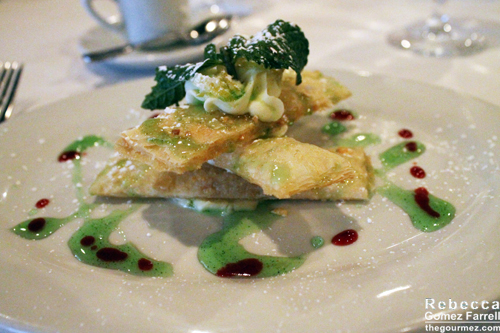 Candied lemon zest, mint syrup, and a raspberry drizzle finished it off. All three of us enjoyed the dessert, although we found eating it without a knife to be a challenge—there may have been flung pastry involved. The lemon in the mousse could have been stronger, and more of the mousse in general would have been nice. We were surprised the phyllo layers were not darker and toastier after caramelization, but the walnut essence came through nicely and the mint syrup was an absolute delight.

Diner #1’s dessert choice may have been the best option. 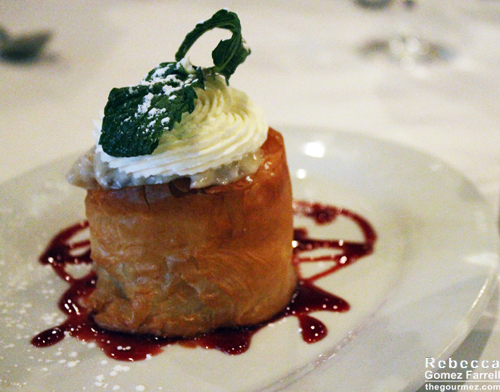 The Charlotte Saint Jacques presents a round of soft carrot cake topped with diced roasted apples and vanilla pastry cream. All that is wrapped in phyllo dough and served toasty. Diner #1 was fascinated with the unusual combination of ingredients that she would not have thought worked together. It warmed her from the inside out.

Saint Jacques is an expensive choice but one with plenty of creativity and the refined technique needed to pull it off. Despite a few qualms, it’s worthy of the occasional splurge for Triangle diners.