Last year, Ben and I spent a weekend in Charlottesville, VA, which I blogged about previously here, here, and here. We happened to pick the weekend a derecho hit the East Coast, which is only relevant to this blog because we got a free hotel stay from that natural disaster. Yay? I use the question mark because when we redeemed our gift certificate, the first thing I noticed in the hotel room was a letter warning about the plague of stink bugs that have taken over the town. From a derecho to stink bugs, Charlottesville knows how to treat us with class.

I do mean that last line sarcastically, because despite the plagues and natural disasters, I enjoyed both excursions to this college and foodie town. And now reading about it is your curse as a peruser of this blog, because I know how to treat you with class, too.

A friend in town recommended we spend our dinner meal at Mas (501 Monticello Road), a tapas place in the Belmont neighborhood, and so we made our way to the very popular corner spot around 10 pm. 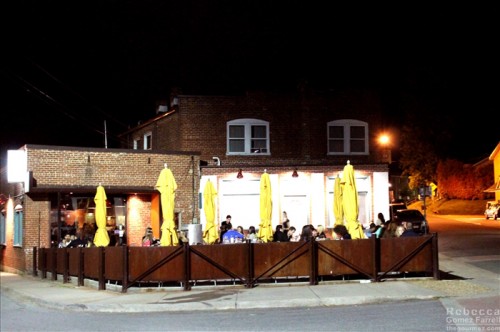 It is definitely a happening restaurant! Even at 10, we had a short wait. There’s an inviting front patio area, but the night was too chilly for me, so we opted for a seat in the restaurant proper, which is two-level. 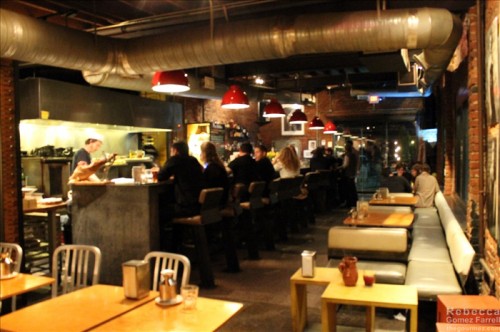 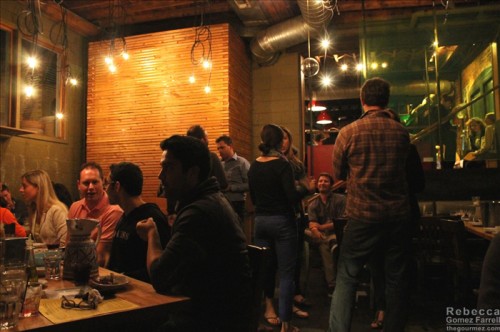 Apparently the upper level near the bar is hotter real estate because we were asked whether the lower level was satisfactory and at least one other waiting party turned it down. I saw nothing wrong with the lower level, and I loved the mix of materials, which shouldn’t surprise those of you who read my Chef and the Farmer post. Brick, multiple cuts and types of wood, gray concrete, and smoky glass pleased my eye.

Vibe-wise, it’s jammed with people and the speakers struggle to play Top 40s hits of years gone by loud enough to be heard. I’d call it a place to chill with friends for the evening, as long as you’re okay speaking well above a whisper. Nibble on the complimentary olive bowl, order a bottle of wine to share, and dig into tapas! All plates we had were available in larger portions for twice the price, and Mas’s ingredients are a combination of imports and goods sourced from local farmers. 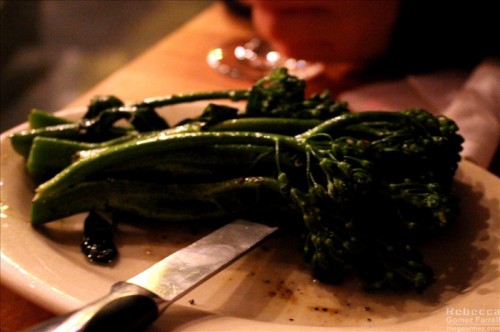 That’s broccolini sautéed with garlic, olive oil, and Amontillado sherry. It’s a simple dish, but its ingredients, especially the salt sprinkle and amazing oil flavor, were exquisite despite the broccolini being a tad undercooked.

Next out was the Bikini Rosa, a sandwich made with salami, pork loin, smoked piquillo peppers, pickled onion, and fresh mozzarella. 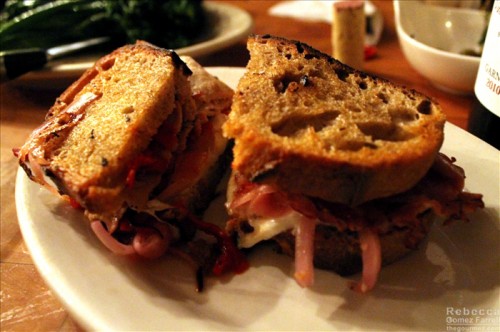 The onion and mozzarella were the stars of this choice. Seriously, that mozzarella was amazing. But otherwise, it was just a sandwich. I’ve had much better of those. I’ve also had better chorizo offerings. 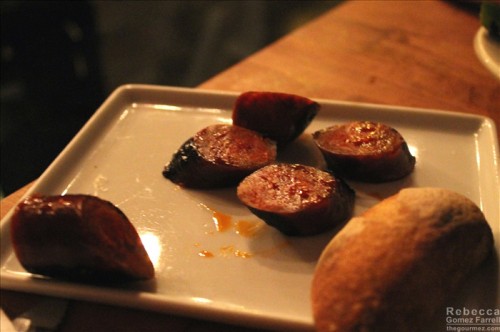 That’s hard Spanish chorizo, which is hard to do wrong, and the extra char on its exterior was great. But for $6, I want a bit more than just sliced up and served with a small crust of bread. The quality of the sausage is unquestionable, however, which was the case with pretty much all our ingredients.

For a fourth choice, we went for the brussel sprouts. Their description on the menu bears repeating: Verdantly vibrant hemispheres roasted for your pleasure with sweet cream, smoked bacon, and Manchego. 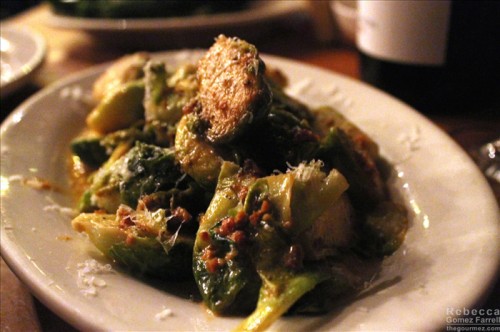 I appreciate a fanciful menu description, and Mas had plenty of those. This dish was my favorite of the night. Like the broccolini, the brussel sprouts were a tad undercooked, but overall, the dish was delicious. The mild but memorable Manchego contrasted nicely with the cream sauce, and the bacon bits had a smoky, delightful presence. Or the smokiness was from the roasted sprouts. Who cares which?! Not I.

We opted for one more to finish the night, the queso con miel. 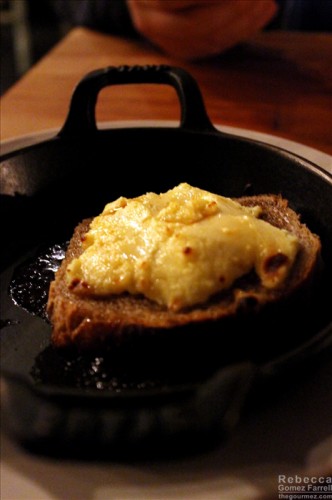 It was griddle-fried and lavender-honey-soaked walnut bread with toasty, soft, sheep’s milk cheese. Once again, the quality of the ingredients was self-evident, and I thought all those elements combined well, especially with the bread’s crunchy outer texture giving the mushier ones something to latch onto. I could eat it by myself and feel pleasantly decadent. The cheese does get mealy when warm, if that turns you off.

By that point, the husband had moved on to a beer, so I was obligated to keep up and ordered a pisco sour. 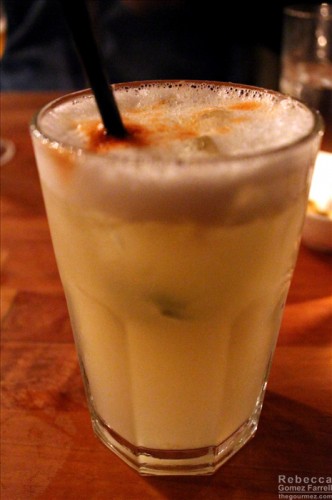 I have no idea if this was an inventive pisco sour—the drink list was on the blackboard in the bar—but it was certainly a tasty one. The citrus was subdued, the egg froth velvety, and the bitters proportioned well.

I think Mas is a great option for relaxing with friends after a busy workday or week, but it’s probably too popular for a romantic date night. The ingredients were top-notch, and several menu items were impressive, but some veered more toward the conventional. It should be noted that conventional is always a crowd pleaser! It should also be noted that the husband was thoroughly unimpressed, but then, I don’t have any clue what will impress him most days. I swear he loved tapas when we lived in Boston.