Bahama Breeze, a chain of island-resort-themed restaurants mainly located on the East Coast with a few Midwest outposts, invited me out to sample a few menu items to promote their new late night appetizer menu. From 9 pm until closing, most of their regular appetizers are now available at half the price, and if you’re a regular reader, you know anything that honors night owls appeals to me. They’ve also added some new drinks to their list of legendary island cocktails, which the press release describes as “10 authentic, custom-made drinks sourced from world-famous island bars and created with the same techniques and ingredients that made them famous.” Everything I’ve reviewed in this column was provided free of charge by Bahama Breeze.

With my husband and a friend in tow, we arrived at the 3309 Wake Forest Road location in Raleigh. 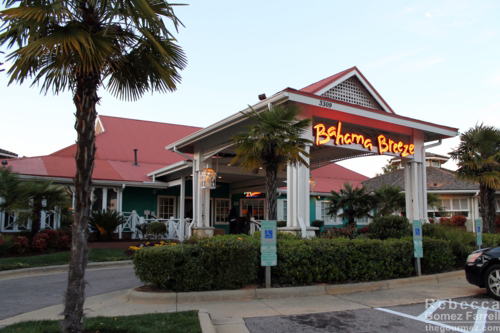 This is the only Bahama Breeze I have been to, and this was only the second time I’ve visited, the first being nearly three years ago when I checked out their White Satin cocktail. The restaurant has been crowded on both occasions, obviously a popular dining spot for this area of Raleigh. I think they do a great job of capturing the atmosphere of large, open-air resorts in the Caribbean minus two important elements: mosquitoes and humidity. I won’t complain about their absence. 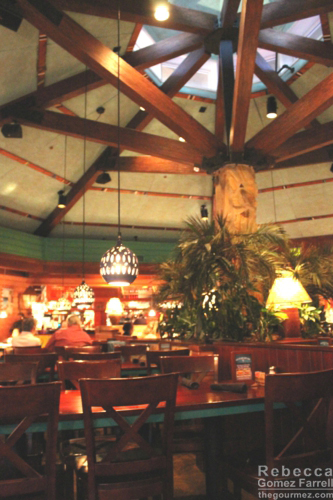 Drinks were first on our agenda, and we ordered from that Legendary Cocktail menu. Friend #1 ordered the zombie, and I admit being charmed by the awesome zombie head stir stick. 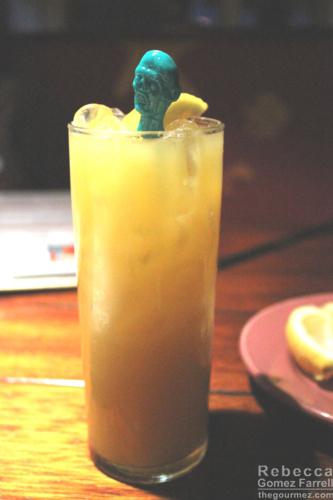 I’m pretty easy to win over, folks. The zombie, made with Myer’s dark rum, Barbancourt and Bacardi rums, and DeKuyper peach schnapps had less kick than these potent drinks normally do, which I consider an improvement if you’re familiar with their typically strong rum punch.

I ordered the painkiller on the recommendation of our attentive, pleasing waitress Erica. It’s a mix of Pusser’s dark rum, coconut cream, and pineapple and orange juices with a sprinkle of fresh nutmeg. 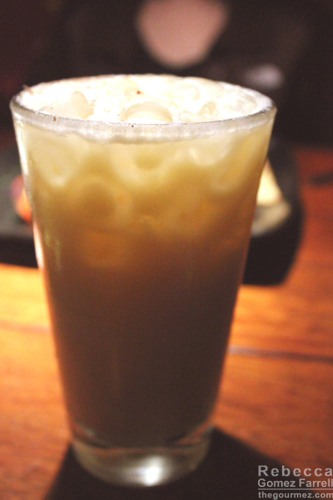 The coconut cream mellowed out the rum to more of an approachable undercurrent, and the fruit juices took a backseat to that creamy blend. The nutmeg sprinkle is key to enlivening the drink. It’s a solid concoction most fruit cocktail lovers would enjoy.

We started out with the habanero chicken wings and a warm goat cheese spread with herbed flatbread crisps. 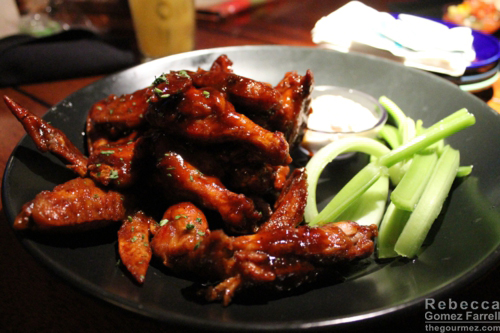 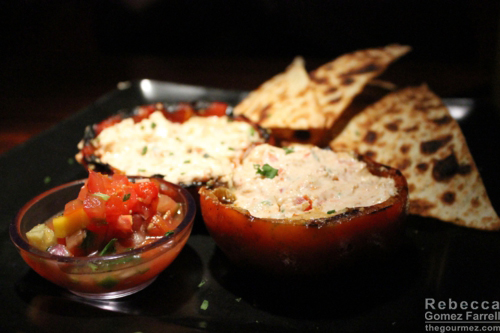 The habanero wings would probably be the high end of spicy for most people, but for my husband and me, they could still go up a few notches. The delightful sweetness of the bbq sauce dominated. I did find its sumptuous reddish-brown coloring quite attractive, but the accompanying dip was nondescript — stirring in more fresh herbs would fix that.

The presentation of goat cheese dip in marinated, roasted red bell pepper cups was lovely. The bubbly flatbread was dusted with herbs and tasty on its own, but I think they were overwhelmed by the very creamy dip. I took managing chef Jaime Martini’s advice and cut up the bell pepper cups to eat with the dip, and wow, is that a brilliant idea! The bell pepper has enough intense, vibrant flavor to stand up to the richness of the goat cheese. The dip had a mild kick, but like the dip with the wings, I think mixing in more herbs would make it a better offering.

Next up were conch fritters with a citrus mustard sauce. 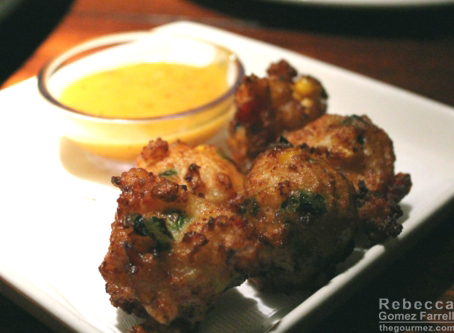 First, Bahama Breeze’s citrus mustard sauce, which occurs often on the menu, didn’t work for me at all, which doesn’t mean it won’t work for you. For me, the mustard’s earthiness was too much of a contrast with the bright apricot-like flavor. But I thought the conch fritters were fantastic, probably my favorite dish of the evening. The conch was chopped up and mixed together into balls with a healthy dose of scallions and red bell peppers for both a colorful presentation and an exciting combination of flavors. Their texture was perfect, and the ratio of batter to filling was balanced well.

We tried the beef empanadas next, served with an apple and mango salsa. 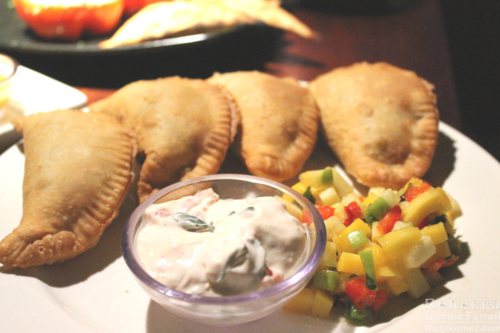 They were very heavy on the cumin, which I think is a good thing. They were also likely the juiciest empanadas I’ve had, and plenty of carrot and potato chunks mixed in with the ground beef. Friend #1 called it “stew in a pocket.” The mango and apple salsa was very nice, especially texturally with the apples’ crunch.

We were nearing our stomachs’ limits on food, but we carried on fearlessly. Friend #1 even ventured on to another cocktail, the Tropical Storm made with Hpnotiq, Malibu rum, and pineapple juice. 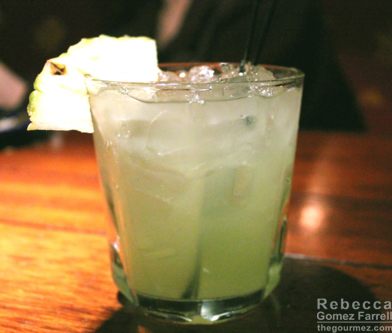 That was probably the best drink of the evening, surprising me with how subtle the Hpnotiq presence was in combination with the pineapple and coconut rum flavors. Hpnotiq can be a challenge to combine well in a cocktail, so that deserves accolades.

Unfortunately, our next dish, from the snack and small plates menu, was not impressive. 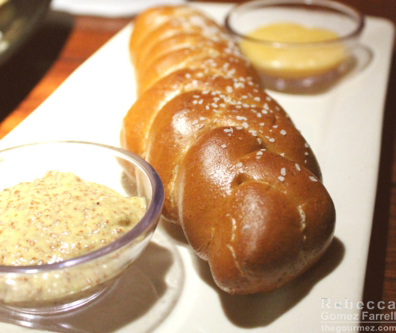 The fresh-baked bimini twist pretzel did not taste freshly baked at all, by which I mean it was warm and fresh out of the oven, but the dough had to be frozen and did not thaw to create a fluffy, inviting bread. The pretzel was too dense and heavy to be appetizing. Trying it with the accompanying sauces did not help, especially the cheddar and Aruba Red sauce that failed to impress me as anything more than a lukewarm béchamel, no cheese or beer flavor to speak of. Normally, I’d say my foodie taste buds were in overdrive, but my husband is a pretzel lover, and this did nothing for him.

Luckily, our last selection, from the appetizer menu, was better. 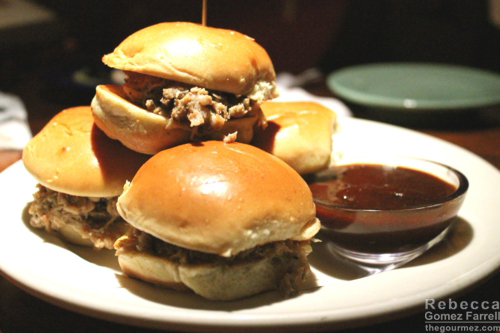 We went for the pulled pork sliders, served with a sweet barbecue sauce. NC readers, these didn’t try to mimic the vinegar-tang of your local barbecue, so no need to rise up in arms! The meat was juicy, closer to chopped than pulled in texture, and came on soft, buttery buns. They need the vinegar- and tomato-based sauce to liven them up, and crisper pickles with a strong bite would do wonders to make them more memorable, but it was a nice way to round out the meal.

I would pass on those pretzels, but the rest of the appetizers we tried were good to great, especially the conch fritters and the habanero wings. Frankly, they would all be quite a value during late night happy hour pricing when they’d come in around $4 to $6 each. The Painkiller and Zombie were good riffs on the standard cocktails, and the Tropical Storm was a fabulous, well-considered, original creation. Thanks, Bahama Breeze, for the chance to try them out!