Firehouse Subs Sampling and Talk with the Founder

Firehouse Subs Sampling and Talk with the Founder 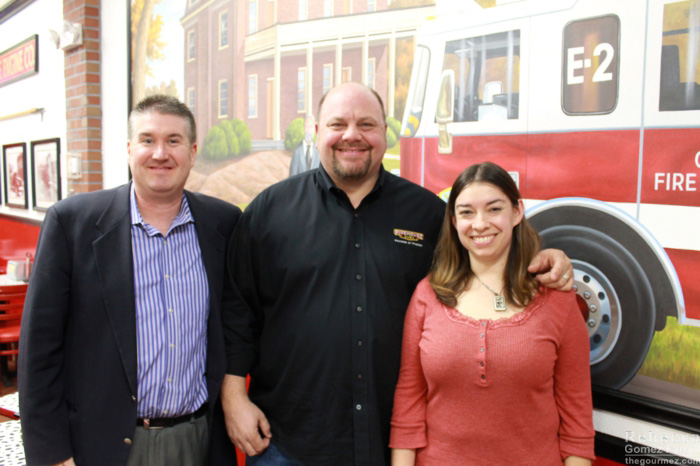 Blogger David of Lunchboy Says, Robin Sorenson, and myself.

Two weeks ago, I was invited to the Firehouse Subs on Kildaire Farms Road in Cary for a night of sub sandwich and soda tasting with my blogging peers. The real draw for me was the chance to hear Robin Sorenson, who founded Firehouse Subs with his brother Chris, speak about the origins of the company, their goals, and their nonprofit work. I jumped at the chance because (a) I am not against chain stores unless they have dubious practices or a bad quality of food, and (b) I had never been to a Firehouse Subs.

The real draw for you is to leave a comment on this blog to win a $10 gift card to Firehouse Subs! First five comments will be mailed a gift card. 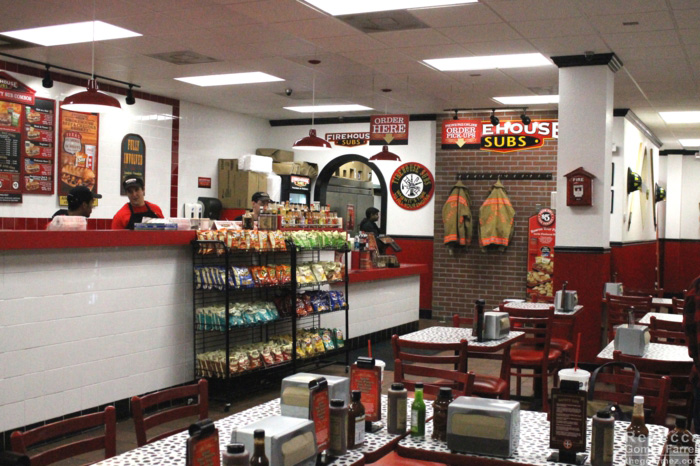 In case you’re one of the few people in the country who also hasn’t been, Firehouse Subs is decorated to resemble the inside of a firehouse with rows of firemen jackets, fake hoses, and attractive murals depicting local fire trucks and scenery. 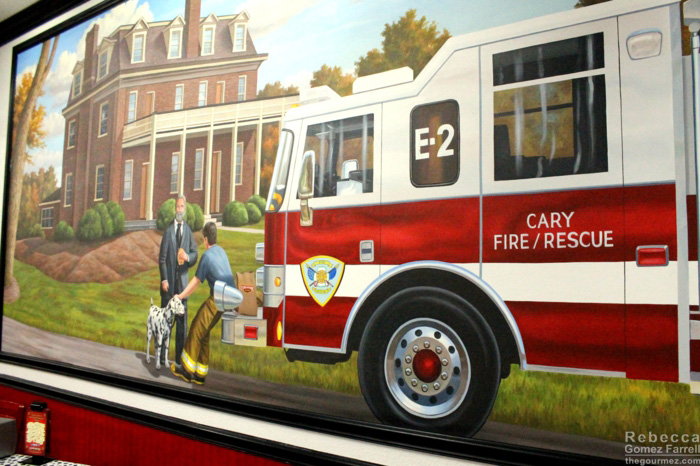 Why the firehouse theme? Both of the Sorenson brothers are former firefighters, and Robin was inspired by the quality of eats and the sense of fellowship that came from breaking bread with his coworkers in the firehouse. I’ve heard legends of the skills of fireman and policemen at the stove, so I believe him. The Sorenson family has a history of entrepreneurship, so it was only natural the brothers would eventually try their hands at it. And they did, opening the first Firehouse Subs in Jacksonville, FL, in 1994. 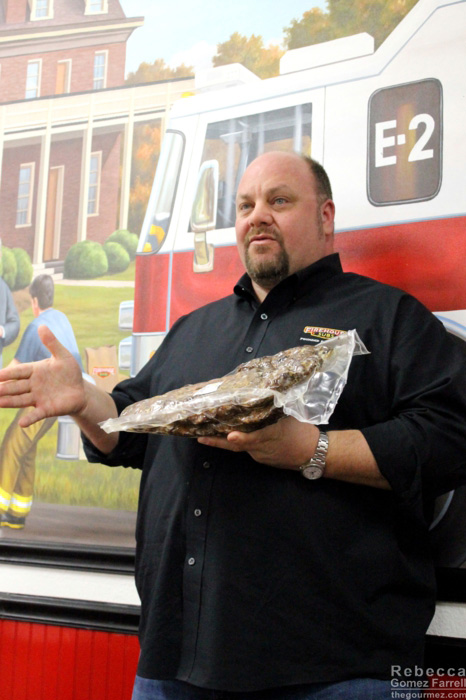 Robin showing off the brisket used in their restaurants.

The Firehouse Sub sandwich-building technique involves toasting the bread then adding the meat, cheese, and dressings and sending all that through a steamer. The cold toppings are added before serving the sandwich. The result is outstanding for me, but I’m a fan of messy sandwiches with lots of mayo. For my husband, it was generally too drippy. I was especially impressed with the creamy, mellow mustard they use because strong mustard can be off-putting for me. The mustard on these sandwiches was a nice complement instead.

Throughout Robin’s talk, we worked our ways through several of Firehouse Subs’ most popular sandwiches, starting with the Hook and Ladder, their best seller. It was also my favorite of the night. 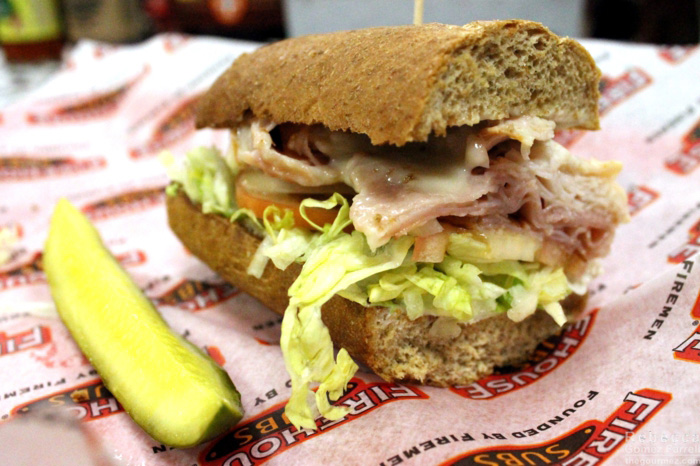 Each large Firehouse Sub sandwich bears a half-pound of deli meat, which means we were served half-portions and still had a hard time devouring anywhere near all of it. The Hook and Ladder is smoked turkey breast and Virginia honey ham with Monterey jack cheese. It’s served “Fully Involved,” which is a fireman’s term that essentially means “all in.” In the case of subs, that means mayo, mustard, lettuce, tomato, and onion. And it was delicious. See the pickle? Those pickles are fresh because they are brined on the way to the stores rather than months in advance. It’s a light, mellow brine, which I prefer. Firehouse Subs’ gets all their pickles from United Pickles in the Bronx, and they have stayed with them for 15 years. Once Firehouse Subs finds a vendor whose quality they like, they remain loyal to them, often paying more for ingredients than their competitors to ensure quality. That’s resulted in higher per-store volume sales than anyone else in the sub industry, so the ingredient cost pays off in the end.

The second sandwich we tried was the Smokehouse Beef and Cheddar Brisket. 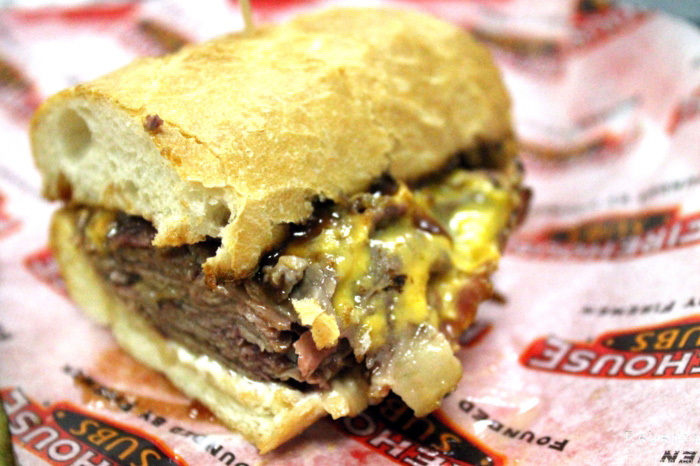 The brisket comes from Sadler’s Barbecue in Texas, where it is smoked with hickory wood for 16 to 18 hours. Served with the delicious Sweet Baby Ray’s barbecue sauce and mayo, it was fantastic. I especially liked how pretty the sandwich is. Those extra-thin slices of meat make it an eye-pleaser. 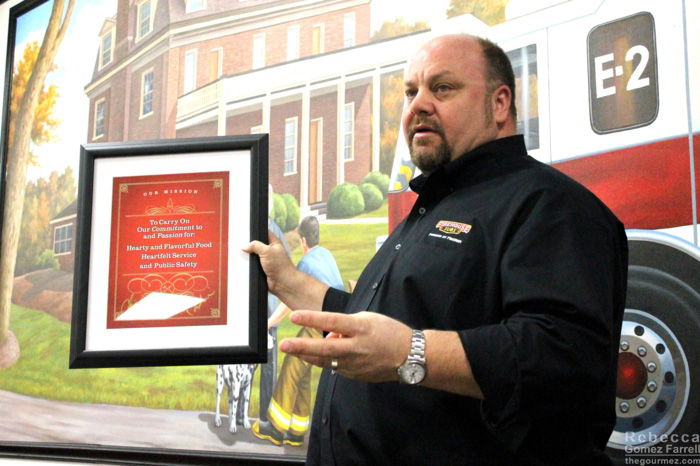 Robin discussing Firehouse Subs’ goals, which are posted in every restaurant.

Robin shared way more information about Firehouse Sub’s goals and beginnings than a single blog post can cover, but I should note his special passion for their foundation, Firehouse Subs’ Public Safety Foundation. It is “dedicated to improving the life-saving capabilities of emergency service entities in communities served by Firehouse Subs.” Primarily, they donate emergency equipment that each individual community needs, such as thermal imaging gear and training systems. Robin and Chris have personally donated disaster relief through the foundation as well, driving in two-wheelers full of food during Hurricane Katrina and in Haiti during their last major earthquake. Customers can contribute to the foundation through purchasing leftover pickle buckets for $2, giving cash donations, or rounding up their orders to the nearest dollar amount, giving the difference to the foundation. 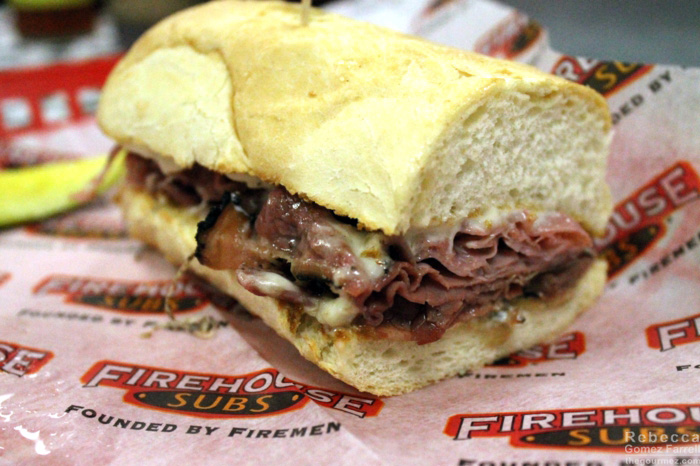 The New York Steamer, which is Robin’s favorite, is made with corned beef, pastrami, provolone, mayo, mustard, and Italian dressing—no veggies here! They weren’t sure about adding this sandwich at first, because in Florida, where the company started, no one eats those meats except on Saint Paddy’s Day. But they focused as usual on quality ingredients, using whole-muscle beef that is sliced in-store rather than ground, and it has done well. The fat melts off in the steamer. 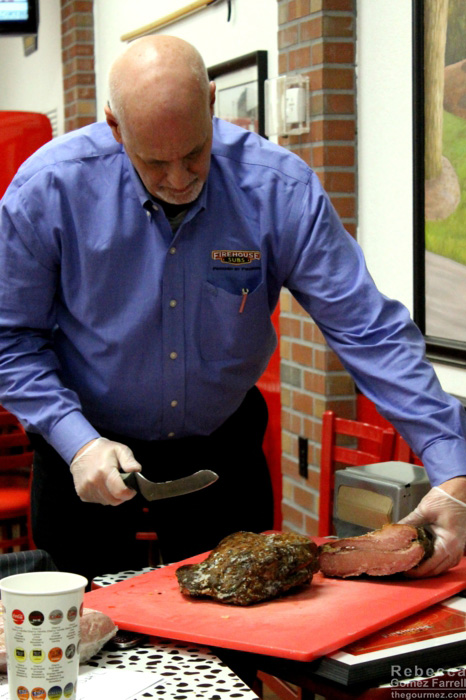 Corned beef and pastrami are not my favorite deli meats, but they were much less fatty and more flavorful in this sandwich than I usually find them.

Our fourth and final sandwich was the Italian, which contains Genoa salami, pepperoni, ham, provolone, and Italian dressing with Italian seasonings. It is also served fully involved. 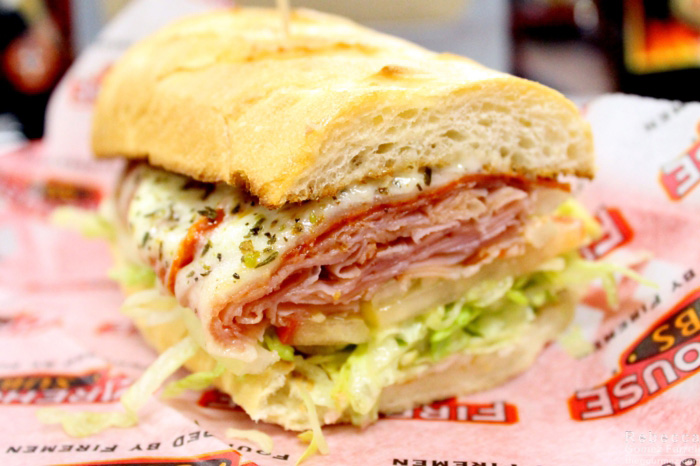 I love salami and pepperoni, and their flavors melded together nicely, though I was overwhelmed by all the meat! Of course, after eating the majority of three previous sandwiches, my stomach may have been in rebellion. Rest assured, I will never order a large sandwich from Firehouse Subs—the amount on the medium sandwiches is plenty. Regardless, I thought the pepperoni had a nice spice kick.

This evening was also a chance for Firehouse Subs to show off their Coca-Cola freestyle soda machines, which I’ve encountered once before. 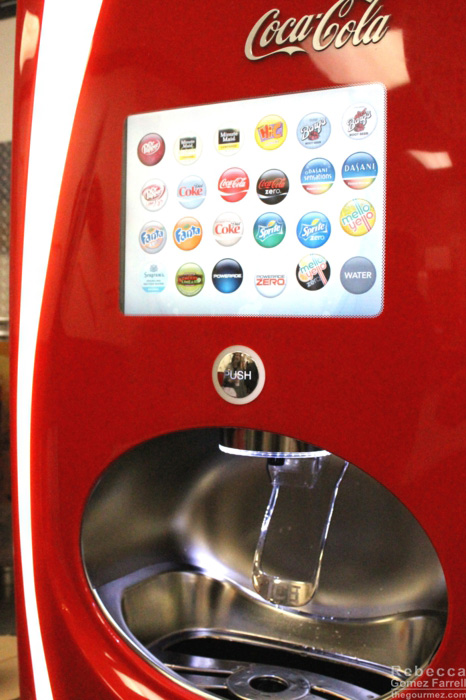 Confusing at first, these soda machines are much better for people like me who don’t like colas. You have access to all of Coca-Cola’s products, and you can mix and match the flavors however you’d like. My Fanta peach and raspberry combination was very good. I also tried the Firehouse Subs Cherry Limeade, a flavor Robin worked with Coca-Cola on for a year to get the brothers’ homemade recipe right. Make sure you read the instructions by the machine for how many limes to squeeze in. It’s a syrupy soda that was definitely too sweet for me without that lime and a tad too fruit punchy with it. The Cherry Limeade is now the #2 soda seller in all Firehouse Subs.

I also had to take this opportunity to try some of the 50 hot sauces kept in all Firehouse Subs because spicy is my middle name. 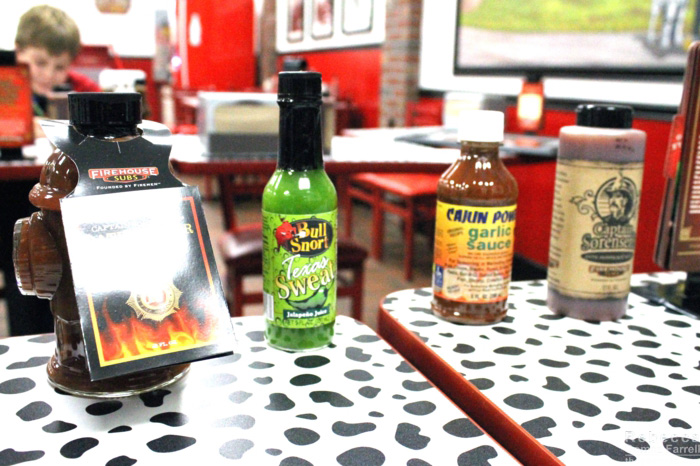 A few of those beauties.

Firehouse’s own sauce, called Captain Sorenson, is made from datil peppers, which Robin shared grows everywhere in Florida. They are extremely hot peppers, but picked when yellow, that spice is mellowed and sweeter. The sauce has a great, thick texture and ingredient blend. For me, it was too tame, ketchup’s livelier cousin, but I can definitely see it as a people-pleaser. It’s their most popular sauce sold in store. I don’t see the point of Bull Snort Jalapeno Water; it really is a spicy sauce of water consistency. The Gator Hammock sauce was my favorite of the five I tried, full of black and cayenne pepper with a vinegar tang.

Firehouse subs sent us home with a cookie and an appreciation for the company. 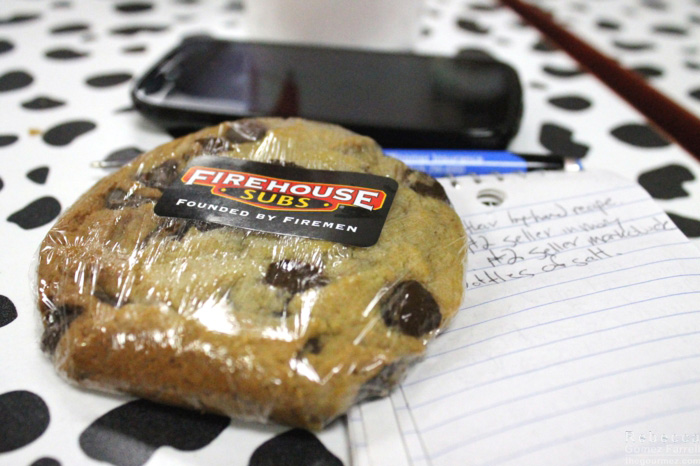 My thanks to Robin and Firehouse Subs for the opportunity to sample, or stuff myself with, rather, their food this evening. Firehouse Sub’s unique style of steaming sandwiches produces a great texture and melding of ingredients. The bread is soft but toasty around the edges, and everything comes together in inviting, warm bites. Plus, I love a messy dressing on any sandwich, so I will definitely be back.

Now’s your chance, dear reader, to win a $10 gift card to Firehouse Subs! Be the first of five people to leave a comment on this post, and you’ll win. Make sure to give me your e-mail when filling out the comment form, so I can get your address.

13 thoughts on : Firehouse Subs Sampling and Talk with the Founder