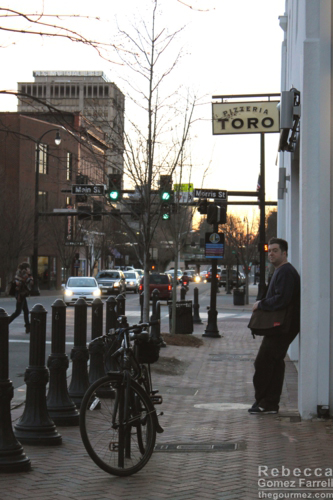 Pizzeria Toro is an alluring and exciting gourmet pizza restaurant. I am jealous of downtown Durham residents who have this gem down the block.  At first look, the main dining room appears to be an office conference room with light brown, wooden, spinning chairs and a long, central table, which may be off-putting for some. But the cavernous, open-air pizza oven and kitchen dominate and bring a warm, casual vibe to the space. It’s a big city restaurant that successfully fosters a neighborhood feel. I want to spend whole nights there. I really do. 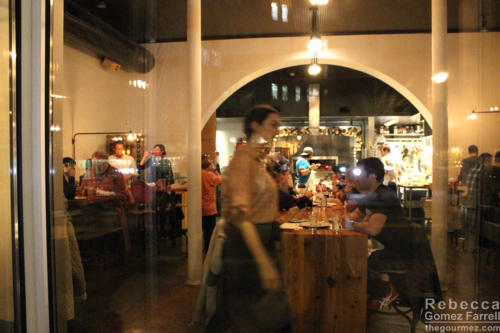 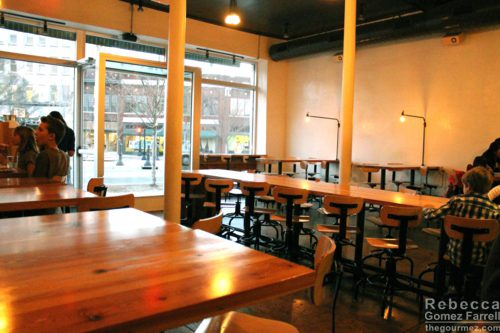 Even the dish towels used as napkins contribute to that relaxed, welcoming atmosphere. And any restaurant playing independent rock instead of contemporary anything gets bonus points. There is a darker bar adjacent to the dining room space, but I never went in.

There are a few more cocktail combinations at Pizzeria Toro than there are appetizer or salad choices, which is a plus in my book. I decided on the Horsefeather made with rye whiskey, Blenheim’s “Old #3 Hot” ginger ale, and orange bitters served on the rocks in a tall glass. 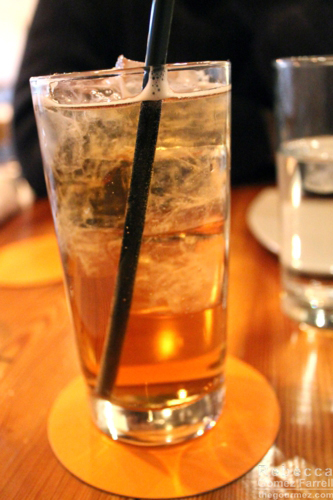 Going down like cinnamon candy, the drink had plenty of heat, great complexity from the bitters, and a touch of sweetness from the ale that made for a fabulous concoction. I nursed it throughout the meal, and it was good to the last drop, which is rare for an iced drink.

My husband and I shared a salad, pizza, and dessert. The salad was shaved chicory, fennel, Chapel Hill Creamery’s Calvander cheese, and truffle. 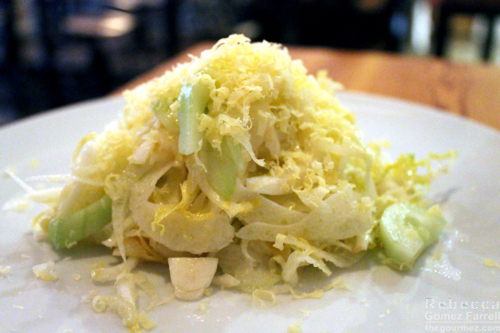 This is when I again remark that I have no idea what truffle contributes to a dish. I have no idea if I tasted it at all. But the rest of the salad was crisp, intriguing, and fun to eat if too bitter overall. The Calvander gave the dish a fair bit of creaminess to dilute the bitter vegetables’ flavors, but it wasn’t entirely successful. I blame that on the tangy vinaigrette. Add a little cream to that, and this dish would soar.

I had no such concerns with the pizza. 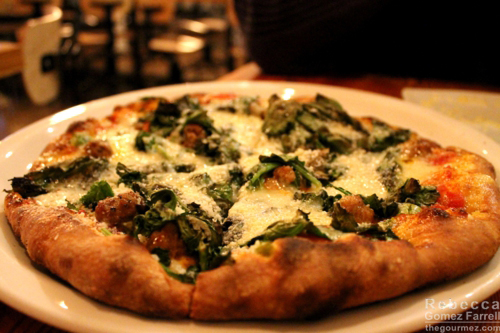 We chose the spicy lamb meatball pizza with rapini and Cacia di Roma sheep’s cheese. The thin crust was coated in something like semolina to give it grit, attractively bubbly all around, and charred on the edges. The whole pizza was shiny with that appetizing grease sheen. You know what I mean, when it’s enough to pull you in but not enough to gross you out. In other words, probably brushed with olive oil before baking. The meatballs fall apart at the slightest jostling and melt away fast in your mouth. Perhaps the roasted whole garlic cloves are a bit much, but that’s me pulling critique out of my ass. It’s a great pizza.

Dessert was just as satisfying. We had a pear crostada with clobber and caramel. 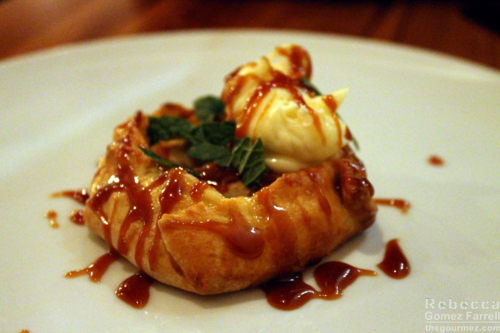 Clobber, based on our devouring of the dessert, is that lemon curd and clotted cream hybrid dolloped on the side. The pastry was baked perfectly, and all the ingredients were top-notch. I especially liked the note of savoriness the basil sprinkle added.

Other than finding the salad a touch too bitter, our meal at Pizzeria Toro was amazing and I didn’t even try the antipasti or special ham charcuterie. I am now accepting invitations to be anyone’s dinner companion there in the future. I can’t think of a better way to while away the evening in Durham.