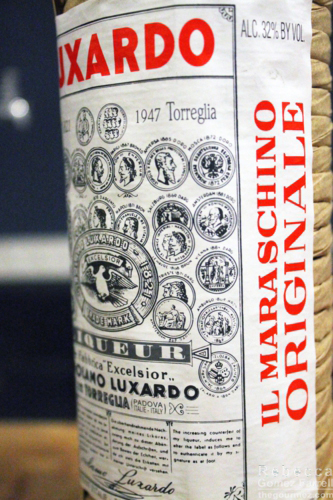 This is a spirit of legend for me, in that I’d seen it in a million cocktail recipes before I could ever track it down. Now that it’s finally appeared at my local ABC store, I can explore it. And it’s full of shockers. Per Luxardo’s website, the spirit is distilled from the marasca cherry and aged for two years before being diluted and sweetened. When I think maraschino, I think of the dessert topping and thus (1) sweet and (2) reddish-pink. This spirit is neither. 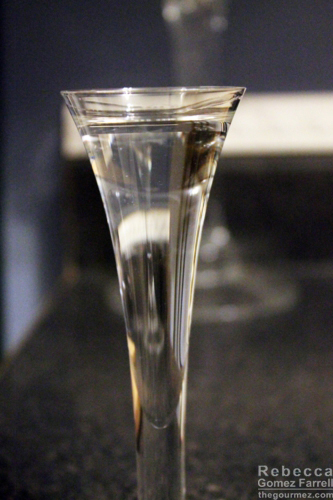 It’s clear as it can be for one. And there’s nothing sweet about the nose. The smell is a blend of cherry and almond that makes me wish it were in ice cream form, like now. I’m not talking toppings. I’m talking the main event.

Okay, the Gourmez, just drink it already! Fine, fine. So about that sweetness…it’s there, but its taste is pure sugar in undissolved, granular form. The sweetness bears no resemblance to most mixers’ almost plastic taste and its very light. Vanilla notes are strong, but it’s the spirit’s nuttiness that’s most surprising. Cherry comes across as the least of its ingredients.

Maraschino stands out on its own, and I do think it’s appropriate for sipping. But I want to try it in cocktails because it has been so prominently featured in them historically. The challenge will be not overwhelming the rest of a cocktaiI’s ingredients with Maraschino’s unique flavor.  So I will peruse Luxardo’s website for inspiration. 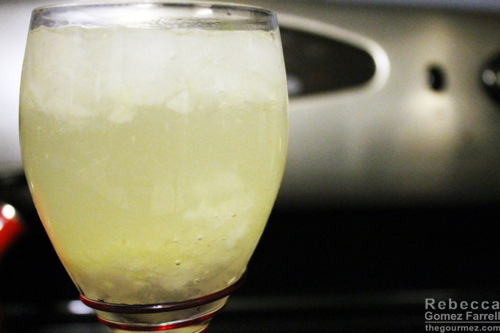 That recipe list is a variation from the Mayan Premonition on their website because I don’t have all their ingredients on hand, so I’m making do. And it does pretty well! The mixture highlights the Maraschino, but it’s easier to drink than it was on its own because its already mild alcohol kick is subdued. The flavors are too mellow, however. Perhaps adding more ginger or doubling the lime would enliven the cocktail. But it’s good, and more importantly, I can better appreciate the possibilities for Maraschino.

I should not have gone looking at other recipes over at Luxardo. There are cocktails combining Maraschino and Sambuca! Now I need to find a bottle of their Sambuca…

This spirit is all over the web, but finding opinions on it turned up nothing. There are lots of reviews of the Luxardo maraschino cherries and a few of Luxardo Cherry Liquor, but I could only find Maraschino Original in cocktails.