Time for more on the TerraVITA 2012 Media Farm Tour! After taking a fast, furious, and intriguing tour of the redesigned Southern Season, our group of food-loving media members hustled into our complimentary shuttle, provided by Performance Subaru, to make the journey out into the wilderness for our next stop. Okay, the wilderness was a warehouse in Hillsborough—that qualifies for this city girl. 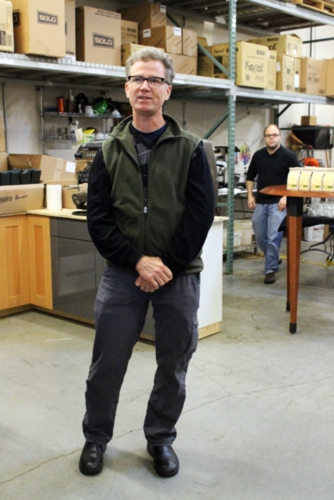 Inside the roastery with Robbie.

Robbie Roberts (why didn’t I ask how he ended up that name?!), owner and head roaster of Joe Van Gogh, met us right inside the facility where they roast all the beans they sell in four different Triangle coffee houses and several retailers and restaurants. The first thing we learned was the difference between the washed and natural processing of coffee. 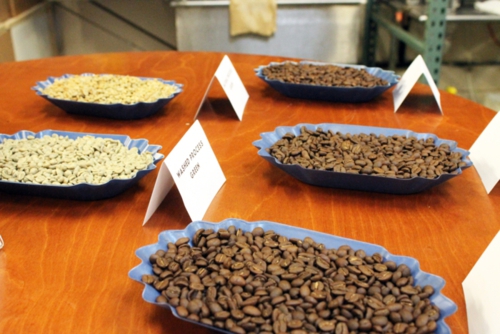 In that image, the unroasted beans are on the left with the washed ones in front and the natural process ones in back. The roasted beans on the right follow the same order, though the farthest one is actually an espresso roast of the bean. All the beans on display and sampled were Honduras Finca Mogola, a coffee of single origin. The washed process uses water to remove the coffee cherries from the beans, and then the beans are dried in the sun. The natural process dries the cherries whole then later husks the shell from the bean. Natural process may sound like it’s somehow better simply by the virtue of that name, but the difference between the two is really about taste. Robbie shared that beans processed naturally usually have accentuated berry notes and bolder flavors. Washed-process beans tend to taste brisk and citrusy. Naturally processed beans are rarer, largely because the humidity of the coffee-growing regions can make it an impossibility. For that reason, Ethiopian coffee is the gold standard of the natural process as the country is more arid than other coffee-growing regions.

We sampled coffee from both processes to compare and contrast, along with an espresso roast. 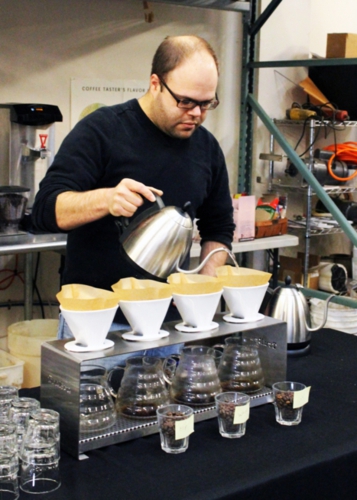 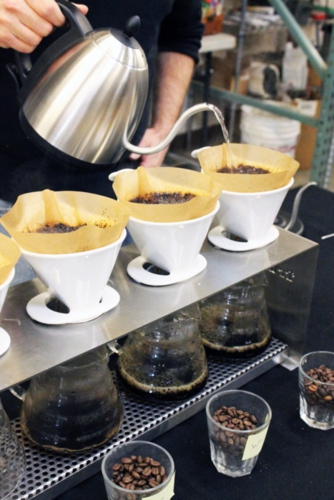 Coffee brewing! It’s really is rather exciting–and that really rather exposes me as an addict. 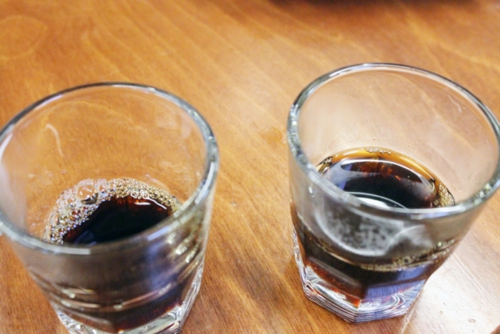 The washed coffee is on the left and the natural coffee on the right. As you can see, there isn’t much difference in coloring, but the flavors were exactly as described by Robbie: more citrus and mellower for the washed, more berry and bolder for the natural. I preferred the washed. We also tried the washed beans roasted to espresso standards. Espresso gets a few minutes longer of roasting time, which evens out its flavors and works better for the short extraction time from steam pressure. The difference in flavor was again obvious as we sampled the coffee.

We also had the pleasure of watching Dutch, one of Joe Van Gogh’s roasters, work on roasting a batch of coffee with their 20-year-old machine, the San Franciscan model. 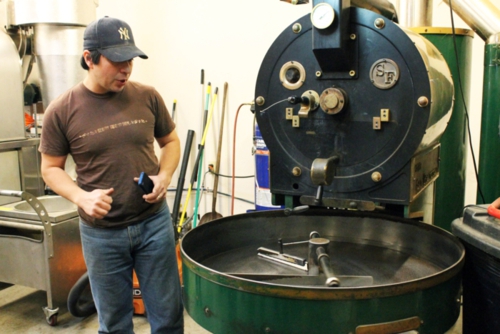 I’ve seen coffee roasting before, and I’m always impressed by the precise, continuous attention the roaster needs to pay to those beans. Dutch explained about how coffee audibly cracks like popcorn as the temperature rises. Espresso tends to be roasted until right before the second crack, but most light roasts are stopped somewhere between first and second crack. He talked about the endothermic energy the coffee builds up and releases in those exothermic cracks and the sweeteners that activity generates, and all the while, Dutch was constantly assessing the coloring and shape of the beans while adjusting the heat and checking his stopwatch. 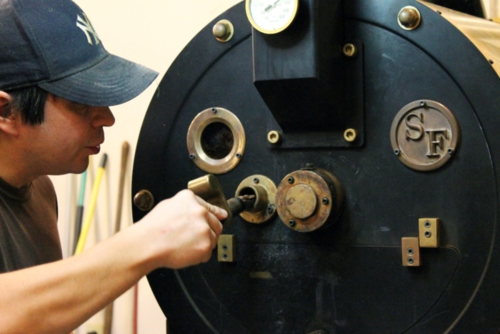 When ready, he opened the floodgate and sent the beans out into the cooling pan. 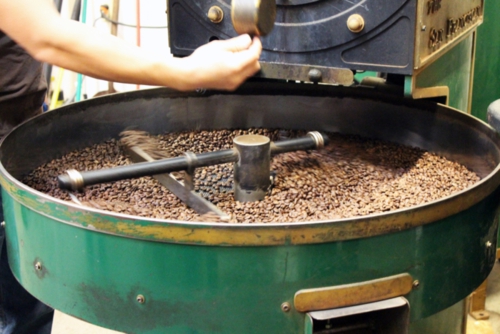 Newer machines have loud, huge fans to instantly cool the beans’ internal temperatures, but older, smaller machines like this are certainly cuter. What can I say? I’m a sucker for a San Franciscan in green.

After those fabulous explanations of coffee processing and roasting procedures, we left Joe Van Gogh’s facility with a small bag each of the naturally processed Honduras Finca Mogolo. Robbie shared that they only acquired 10 bags (big ones, folks, really big ones) of the naturally processed beans this year, so that gift was extra appreciated. I can’t wait to investigate those berry notes with my French press soon.

Next stop on the TerraVITA Media Farm Tour? Whitted Bowers Farm and a healthy dose of information on just what biodynamic farming is. I hope I don’t overdose on this caffeine before I get that post written.