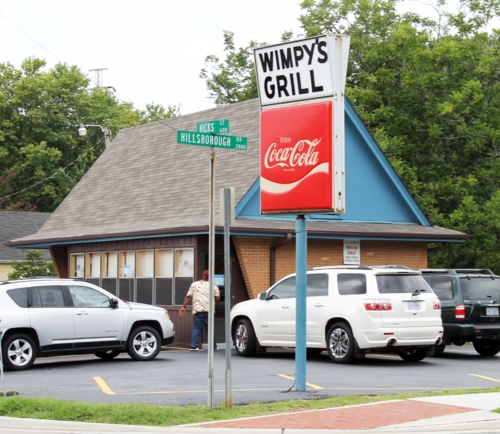 Wimpy’s Grill has been awarded best burger and takeout in a number of publications over the years, and they were featured on Man Vs. Food  in 2009 for their garbage burger that piles pretty much any topping available onto a double cheeseburger. Inside, it’s barely wide enough for two people to stand side by side at the counter, but there is plenty of room for their customers to line the walls, waiting for their fast-cooked orders to go. A wallpaper border of Coca Cola advertisements is the only decoration beyond clippings of those previously mentioned awards. It’s cash only, and the staff is very welcoming and greets their regulars by name, remembering their usual orders. In addition to burgers and hot dogs, Wimpy’s serves up giant biscuits available for sandwiches with steak, country ham, fat back, red hots, bacon, or sausage. Onion rings, fries, hash browns, grits, and chili are the available sides. I was surprised they don’t offer shakes, but they do have three desserts daily: a changing cake, a cobbler, and banana pudding. The daily specials featured a few options touting pinto beans.

I was there for the burgers, and I went for a single cheeseburger with lettuce, tomato, coleslaw, grilled onions, and mayonnaise. 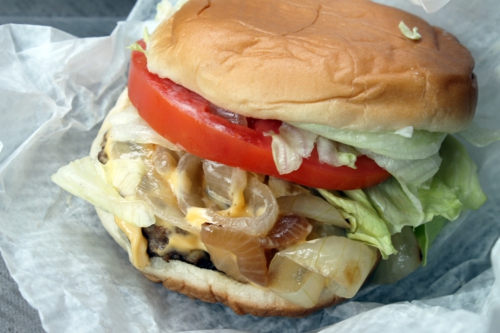 Now this burger is the type you need the wrapper for, because those juices are going to drip out everywhere. The patty was good and plenty large enough without needing to make it a double. It seemed between 1/4 and 1/3 of a pound’s worth of beef. I wouldn’t say its flavor stood out, but it wasn’t dry either, so I was happy. The bun stood up to those juices, which is a must for me, and I especially appreciated the thick tomato slice and nice melt of American cheese. Iceberg is perfectly fine with me, but crispier cuts of it would have been better. The coleslaw had almost no presence, so I’ll leave that off on future orders. Now I’ll wax poetic about the grilled onions. They were wide-cut and grilled to the point of caramelization with lots of deep brown color and sweet onion flavor. With them, the burger was pushed just over that average line.

I also tried dessert, opting for the peach cobbler. 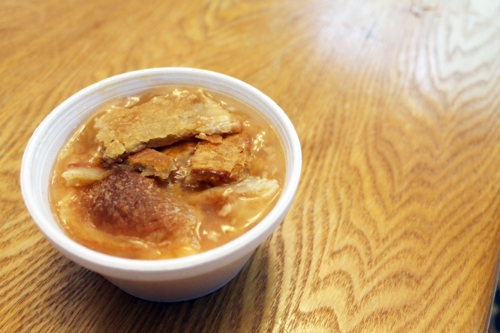 It’s closer to a slice of peach pie crammed into a cup than a cobbler—no streusel or crumble here, but two layers of crust. The top layer had an ideal crunch with a shake of baked sugar sprinkles, but the lower layer, unfortunately, was doughy and unappealing. The fruit itself was delicious, and the texture of the filling was like the standard type you’d get out of a can. I tried it cold and warm, and I recommend it cold, but honestly, I’d just pass it by. The banana pudding sounds intriguing.

I found Wimpy’s Grill a solid choice for a hamburger that will hit the spot, although I had no revelations of burger bliss. However, for the price and the neighborliness of the workers, it really is a great lunch option. Anybody had their biscuits? I think I’ll have to get one next time I’m there during operating hours.