Mac and Cheese at Noodles & Company 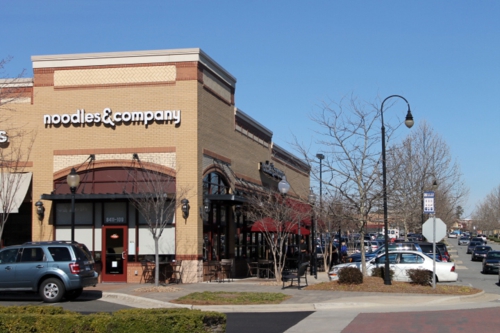 In early February, I was invited to try the new mac and cheese options at Noodles & Company. I said yes because 1. I have no aversion to chain restaurants beyond when they let success get in the way of creating delicious food and 2. I’d never tried their mac and cheese before. I have this compulsion to try everything once, and who was I to say no to adding something as tempting as a restaurant’s signature mac and cheese to my list?

You should know two things before reading my thoughts on Noodles & Company’s versions of this American staple. First, I’d been to Noodles & Company twice before and was pleased, if unenthused, about the Asian noodles and salad dishes I’d had. Both were good, but they lacked any particular flair that would bring me back in for more. Second, I’m over the gourmet mac and cheese phase. I’ve yet to find a truffle oil or lobster version that makes me happier than a simple bowl of creamy, cheddar-swimming noodles. Thus, I may have been a bit of a tough customer, so to speak — it’s hard to call myself a customer when all the food was free — before stepping into the Brier Creek location. 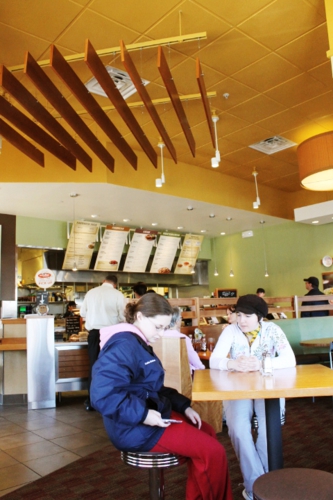 Brian Rosenfeld, their friendly manager, greeted me and asked me to take a seat. I helped myself to a remarkably good glass of iced black tea for a chain restaurant and waited for the food to arrive. First, I tried their chicken potstickers, an order of 6. 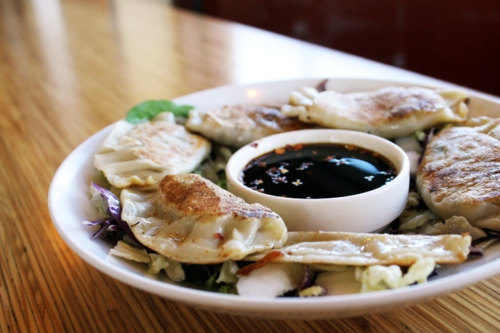 These surprised me a lot. The dipping sauce was especially memorable with a great kick from red chili flakes, but the filling also impressed. It was very fresh and unique for potstickers. The chicken was finely ground and mixed together with carrots and a mixture of herbs — I think I could pick out oregano. It had a great distribution of filling to shell, and each bite went from sweet to fiery.

But I was there for the mac and cheeses. Noodles & Company first introduced their “grown-up” mac and cheese options last spring for a temporary time, then brought them back again this past winter to appeal to our comfort food longings in cold weather. There are three: Truffle Mac using white truffle oil and baby portabella mushrooms; Bacon, Mac, & Cheeseburger, “a deconstructed version of another classic American comfort food, the bacon cheeseburger”; and Chili Mac, “zesty red chili, crumbled meatballs, shredded cheddar-jack cheese, and diced green onions on top of a creamy bowl of Wisconsin Mac and Cheese.” I opted to try their base mac and cheese dish first to compare it with one of the fancier options. 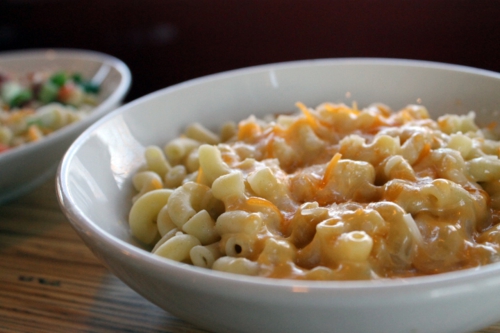 The Wisconsin Mac and Cheese is made with cheddar and jack cheeses, cream, and elbow macaroni — it can’t get simpler than that. Like all of Noodles & Company’s pasta but the udon, the macaroni is made from amber durum wheat that is grown and made into pasta by the Dakota Growers’ Pasta Company in North Dakota.   This delicious mac and cheese serves as the base for Noodles & Company’s fancier options, but it’s honestly one of the best mac and cheeses on its own that I’ve had in years. It’s what I think of when mac and cheese comes to mind—a thick, creamy sauce with most the flavor coming from the cheese. It was tangy in all the right ways, and the generous sprinkle of just-melted cheddar on top only made it better.

Buoyed by how good the Wisconsin Mac and Cheese was, it was time to try one of the variations on it. Only the Bacon, Mac, & Cheeseburger was safe for my taste buds – you’ve noticed that mushrooms are my worst rating, right? And the smell of chili makes me sick rather than tantalizes me. So the choice was easy. 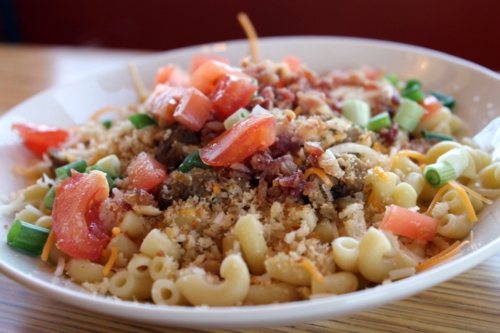 This dish was less like a deconstructed cheeseburger and more of a cornucopia of the three main cuisines Noodles & Company specializes in: American, Mediterranean, and Asian. The American came from the mac and cheese base and the bacon. The burger was actually sliced up meatballs from the Italian side of the menu, as well as breadcrumbs sprinkled all over. The Asian came in with the green onions sprinkled on top. I loved the idea of it as being a truly American dish because it pulled from all those different cuisines, but ultimately, this one was lost in an identity crisis. There was too much going on in each bite, and the bacon served only to dry the dish out and make it too salty. The saddest part was that the delicious creaminess of the base mac and cheese was lost. It wasn’t horrible by any means, but I was definitely disappointed after falling in love with the simpler Wisconsin Mac and Cheese. Of note, this version and the Chili Mac are no longer on the menu, so I may not be the only one who held that opinion of it.

Overall, this tasting experience confirmed my opinion that fancy mac and cheeses don’t add much to the dish. Manager Rosenfeld told me that the Truffle Mac receives many compliments, and it’s his favorite, so if you’re inclined toward those flavors, you may enjoy that one. Personally, I’ll stick with the Wisconsin Mac and Cheese, and I’m glad I had the opportunity to try it. It and the potstickers were delicious reasons to return to Noodles & Company next time I end up in Brier Creek. Noodles & Company’s recipes may not always succeed, but when they get it right, they get it very right.

6 thoughts on : Mac and Cheese at Noodles & Company