Last Thursday, I was invited with a bunch of other Durham food bloggers and lovers to sample the new spring menu for the Fairview Dining Room at the Washington Duke Inn.  We were treated to a four course lunch, and it was absolutely gorgeous on their patio. 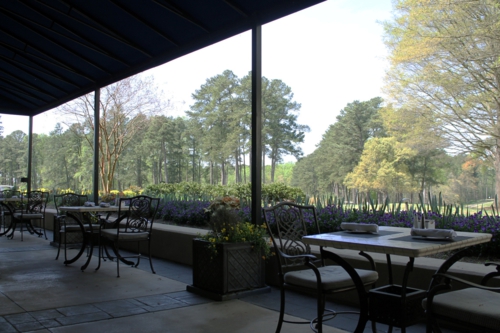 View from the patio. 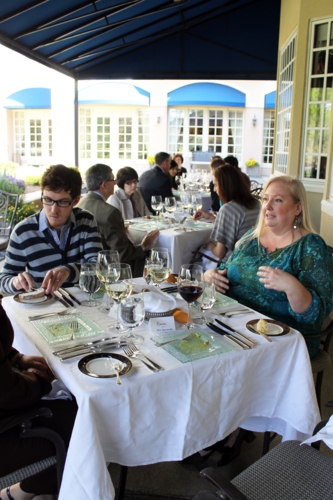 Quite the lineup of food bloggers and Washington Duke Inn staff.

I’ve dined at the Fairview Dining Room once before and I loved it, but I hadn’t been outside. The grounds are incredible, especially on a warm spring day like this one was. And the food lived up to the setting in every way. Plus, they made my life easy and gave us printed menus. 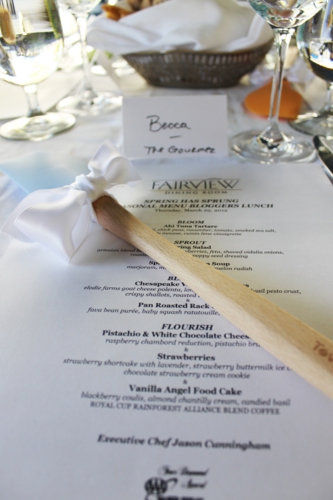 Bonus points for not having to write down the ingredients.

You’ll notice in my descriptions how much I love Chef Jason Cunningham’s expertise mixing up tastes and textures—I adore having contrasting elements come together in a dish. You’ll note as well that I said four courses, but we actually had eight dishes. The kitchen prepared small versions of several menu items and served them together for most courses. The first one, however, was on its own and dubbed the Bloom course, an ahi tuna tartare. 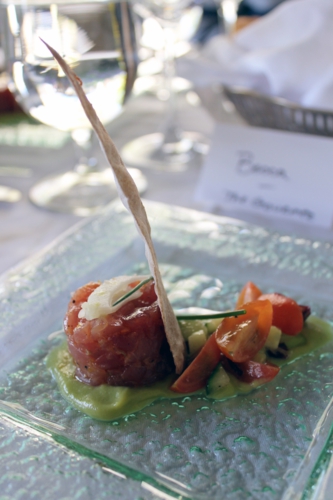 It was delicious; raw fish is growing on me, especially when it is cured like tartare should be. The cure was a cumin and lime vinaigrette, and I loved it. I loved everything about the zing and vibrancy of lime that ran through the whole dish. The fish cubes were served over an airy avocado mousse and a sprinkling of fennel, chick peas, cucumbers, and tomato. I especially liked combining the buttery texture of the fish with the singular pita chip.

We moved onto the Sprout course next, for which a salad and soup were paired together. 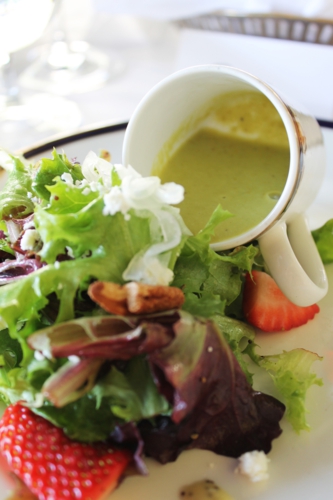 Mixed baby lettuces, strawberries, very salty feta, Vidalia onion shavings, and roasted pecans were tossed in a honey and poppy seed dressing for the salad. The ingredients were all top notch, but I did find it too salty for my taste buds—it’s not hard to be too salty for them. The soup, however, was very well conceived. It came out with watermelon radish diced in the cup by itself, and then the waiters poured the thick soup over that. Oh my hungry readers, it’s a sweet pea soup made with mascarpone, and that cheese gives it a delectable richness and thick texture that makes every sip worth savoring. I wish I had more. Like right now.

After Sprout, it was time to Blossom with a duo of main entrees. 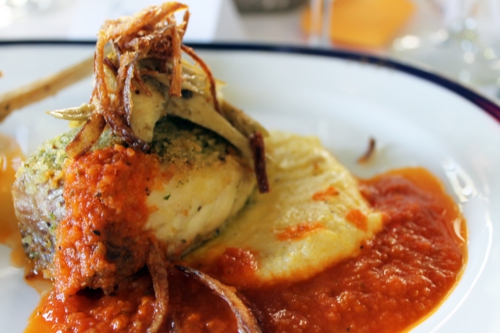 A perfectly cooked chunk of Chesapeake striped bass was coated in a basil pesto crust, combined with long-stem artichokes, served over goat cheese polenta and a roasted tomato caper sauce, and sprinkled with fried shallots. That sounds like savory heaven to me, and it was. For this one, the acidity of the marinated artichoke hearts and the tomato sauce combined beautiful with the richness of the polenta and the fish’s texture. Add a little crunch from the shallot, and you’ll find me eating every last bite.

I did not eat every bite of the lamb, however. 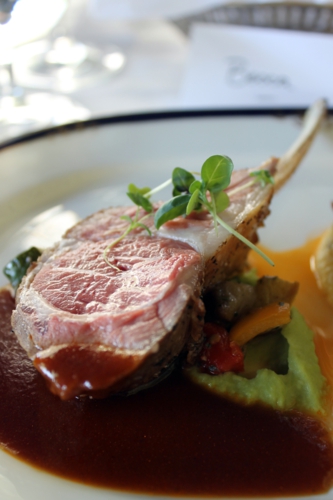 To be fair, that wasn’t Chef Cunningham’s fault. Lamb is not my favorite meat, nor is rare meat something I can handle quite yet—I know, I know, I handled the tartare just fine! That simply means all hope is not lost for me yet in the rare meat world. I did enjoy the few bites I took of the lamb, although I’m not so sure about combining the horseradish lamb jus with the fava bean puree. They were too similar in texture for me, but the taste of the jus was very reminiscent of the barbecue sauces I grew up with, and I thought it quite tasty. The horseradish was also proportioned well within the au jus sauce—it can often be too much for me. Regardless, the striped bass won by a mile.

The Flourish course, a trio of desserts, arrived last. I’ll work my way from least to most favorite. 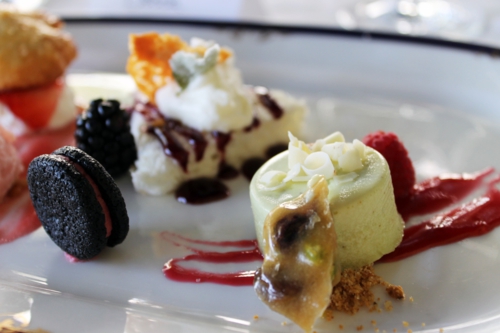 The pistachio and white chocolate cheesecake bite was of the extra creamy variety. Surprisingly, I could taste very little pistachio in it, though it was obviously used to lend its beautiful green color. The cheesecake impressed me least only because the white chocolate was most prominent. As is often the case with white chocolate, it became too sweet too fast. The hunk of pistachio toffee had much more of that pistachio taste I adore, and the raspberry Chambord reduction sauce blended nicely. 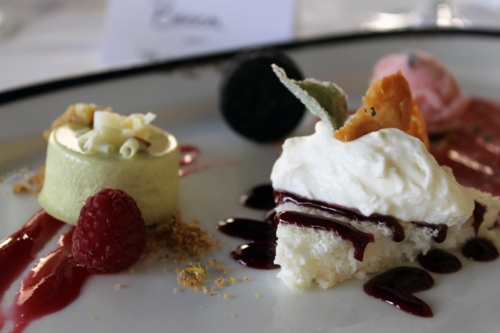 It’s hard to decide which of the last two desserts was the runner up, but I’ve decided on the vanilla angel food cake with blackberry coulis and almond chantilly cream. Angel food cook doesn’t do much for me, though it was fun to try a homemade wedge of it after so much of the extra-spongy store-bought variety. The blackberry sauce was yummy, and I really enjoyed the whipped almond cream. First of all, almond extract always makes whipped cream better, but this one also strongly tasted of the powdered sugar used to whip it up, which I rather liked. Plus, there was a cute little candied basil leaf tucked into the whipped cream.

I’m not sure that the cookie was paired with the angel food cake, but that was super good. 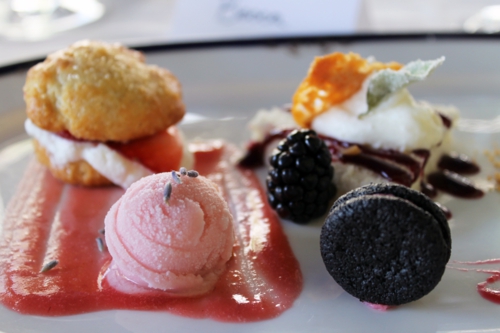 Cookie on the right, lavender strawberry ice cream soon to be discussed on the left.

The dark, brittle chocolate discs were delicious, and the cream filling pleasantly reminded me of the wafers you can buy at the store—you know the ones. They come in vanilla, chocolate, and strawberry varieties and the texture of the wafer is nearly cardboard but it’s somehow really addictive anyway? This was like those but a million times more bright in flavor.

My favorite dessert was, surprisingly, the strawberry shortcake. 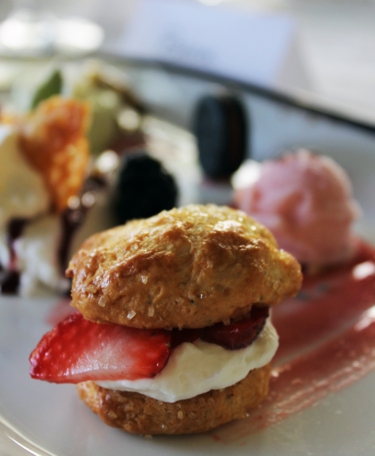 I say surprisingly because I can often find them run of the mill, but both the ice cream and the shortcake were wonderful. The sugar crystals baked on top of the biscuit made for sweet bursts and an egg wash gave it a crisp, delightful exterior. The strawberry ice cream, sprinkled with lavender that I swore I could taste in the biscuit as well, was a perfect compliment.

Of course, you can see from those desserts and the earlier photos that the Fairview Dining Room excels at presentation in addition to combining disparate tastes and textures. If you don’t want to make your way through the entire spring menu found here, make sure you give the sweet pea soup and striped bass a try. Those were the standout dishes for me and worthy of any palate.

Thank you to Chef Cunningham, Wendy Shannon, Danielle Kaspar, and the rest of the Fairview Dining Room and Washington Duke Inn staff for having us out! It was an absolute treat. Thanks also to Danielle and my two other fabulous dining companions, Matt of Green Eats Blog and the Triangle Localista whose name escapes me, for being great company. More Thursdays should be spent giving me free food with great conversation!

Dining took place on 28 Mar 12. You can find other takes on the menu at the Examiner and Durham Magazine, so far. More will post soon, I’m sure!

6 thoughts on : Spring Menu at the Fairview Dining Room (Durham)