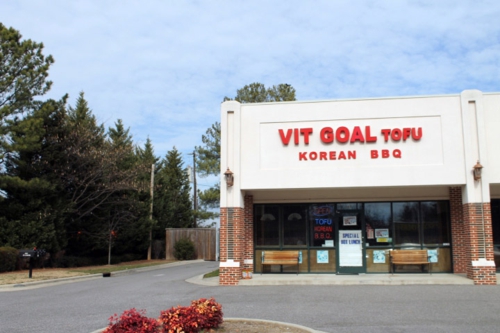 Vit Goal Tofu is a Korean restaurant hidden away from street view off Highway 55. I enjoyed the dark woods of their interior, placing it perhaps a notch up from many other Asian joints for ambience. 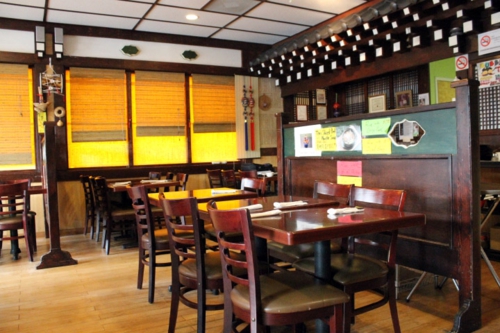 Don’t expect much for service–I don’t think we had one word spoken to us for the entire meal, but I don’t really mind that, although I mention it because I know some of you do! The menu covers a range of Korean fare with an emphasis on soups. To expose my cards, this was the first time I’ve eaten out at a Korean restaurant, so I may not be the best judge of the food. My dining companion is a big fan of Chosun OK, and she noted that the menu was very similar but Vit Goal definitely had a stronger soup selection.

Instead of water, you’re served a cool tea by Vit Goal’s staff when you sit down. 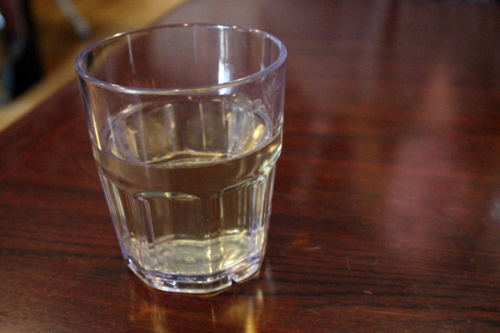 It had toasted rice notes, which I love in tea. We were there at lunch, and we were served a full range of Korean pickles to accompany our meal.

It included lightly pickled cucumbers, bean sprouts, and kimchi. I thought the cucumbers were great, but the bean sprouts and kimchi were both too limp for my taste, and the kimchi could have been a lot spicier. 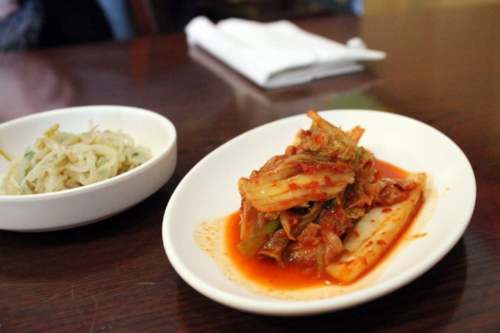 My friend decided on the seafood soup, which looked very, very appealing. 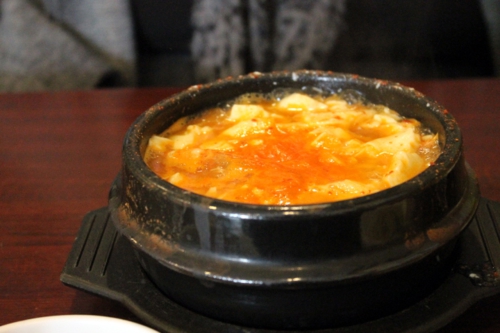 She enjoyed it enough to want to come back and try other soups there, but she didn’t like having to take off the shrimp shells and a head. That’s a personal preference of course, but one I agree with for soup. It also came with clams and oysters.

Wanting to try both appetizer and entrée, I decided on a lunch bento box option. 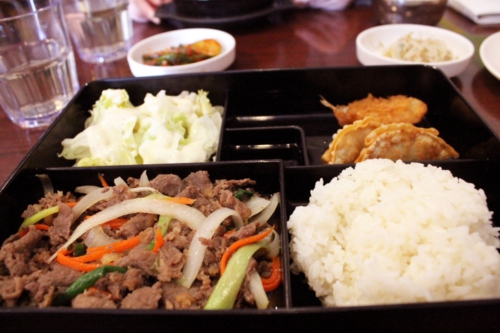 Rice, salad, a few small pot stickers, and sliced beef in a sweet, delicate sauce completed the box. The lettuce swam in a thick, creamy, and plain dressing. The rice was standard. The pot stickers were my favorite item on the menu—stuffed with a good level of filling and not at all greasy.

My friend preferred Chosun Ok to Vit Goal Tofu, but again, she did think it worthwhile to come back to try more soups. I was less impressed, although I do like that they served tea, the cucumber pickle was good, and the pot stickers were worthwhile. Ultimately, too much of the meal was mediocre for me to want to pay the prices to return. Perhaps I need to give that Chosun OK a shot so I can finally have Korean BBQ from a restaurant. One of my best college friends swears that the BBQ she makes pales in comparison to the real stuff, but I’m not so sure.