Our very short trip to Philly last month was filled with lots of food and drink—probably too much of the later, but you’ll have to ask me for the full story. In one and a half days, we managed loads of cocktails, mussels, lobster pudding, Indian, and of course, a cheesesteak. I hope to fit all that in this one blog post, but we’ll see how long it is by the time I’m done! (Update: too long!)

Being the smart cookie I am, I knew I needed to enlist the help of Twitter to recommend places to try out. One of them was Monk’s, a Belgian pub with an excellent beer list per all the recommendations I received. We found it pretty easily, but as it turns out, everyone’s a big fan of Monk’s! The place was swamped inside, even on a Sunday night. 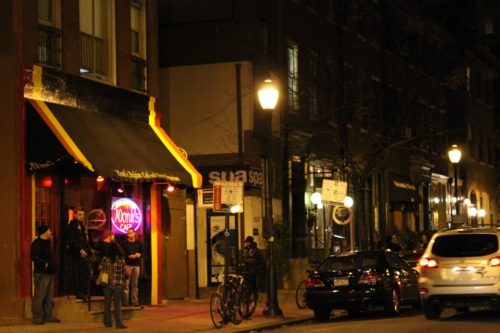 Thus why so many people recommended it to us, I’m sure. However, we didn’t have enough time to wait for a seat somewhere, so we opted for the Black Sheep instead, only a few blocks away. 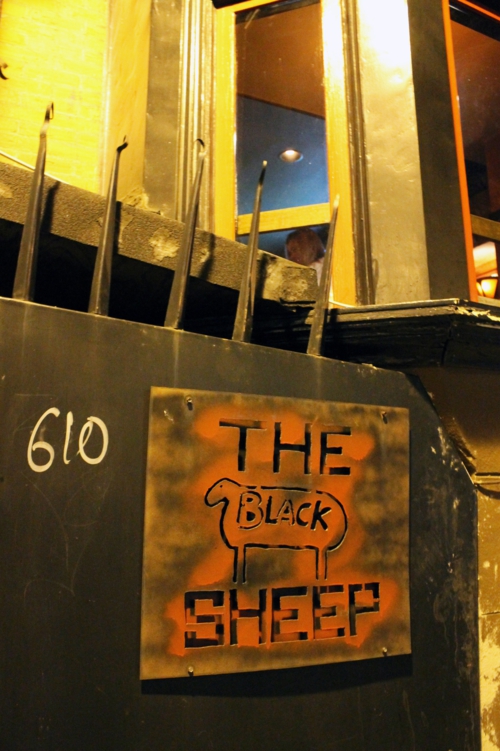 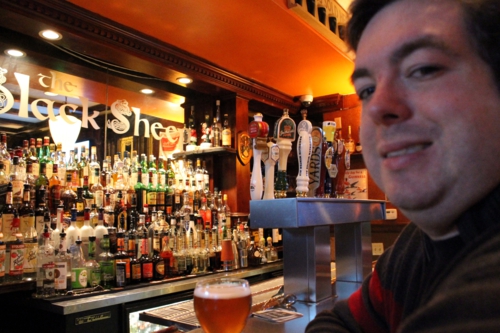 It was a pretty awesome Irish pub, with a good, if not extensive beer list. Mellow vibe, and a nice place to actually hear your friends if you’re out with a group. 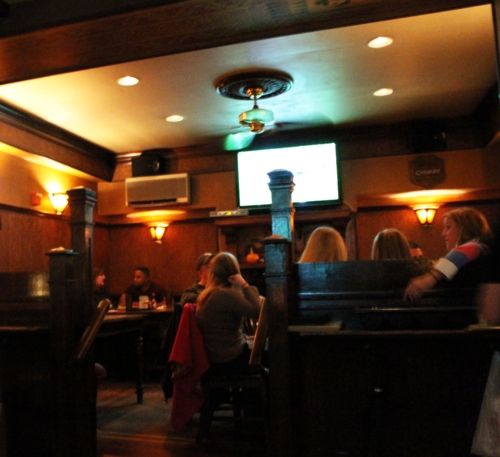 I was quite impressed with the mussels we had as an appetizer before our show. 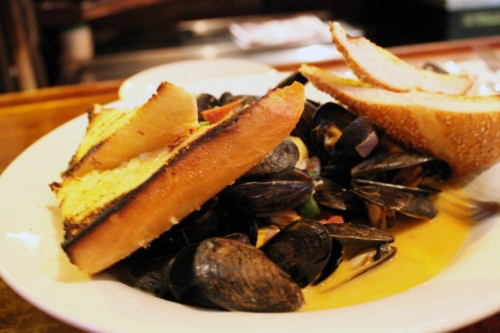 They came in a white wine broth with spicy pepperoni, and every bite was delicious. The garlic bread was to die for, especially when sopping up the sauce. Having something delicious to sop up sauce with is the point of eating mussels, right?

Most of our evening was spent at World Café Live, an excellent rock club in the University City section of Philly. 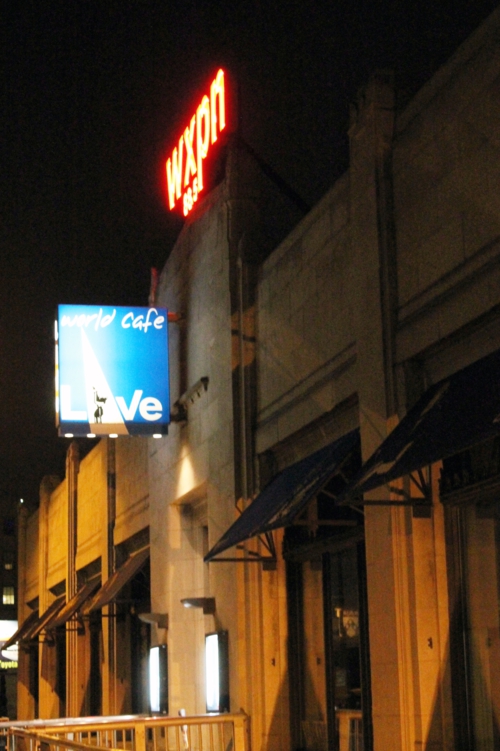 The same building also houses the University of Pennsylvania’s college radio station. There’s an upstairs and a downstairs venue and both offer dining options while you watch your concert. I think the upstairs is for smaller shows, and it’s pretty intimate with small round tables spread around. 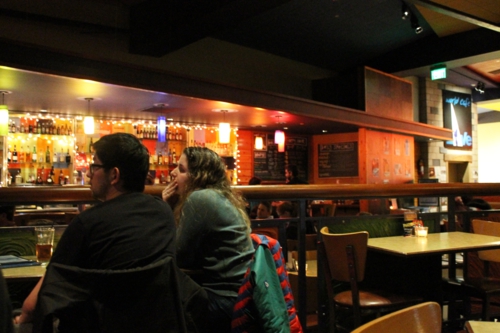 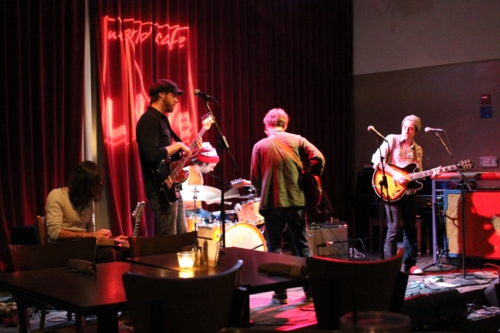 The food at World Café Live surprised me; I don’t expect a rock club to have the best options, but they offered a range of items from your standard paninis and quesadillas to entrees like filet mignon with celery root puree. Ben went the sandwich route, choosing a Panini with turkey, ham, fennel salami, brie, and a pomegranate reduction sauce. 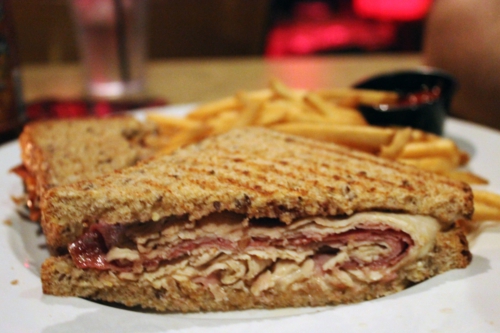 I was intrigued by the lobster bread pudding with a roasted corn sauce because it was one of the most random entrees I’d ever heard of. Besides, I love lobster. 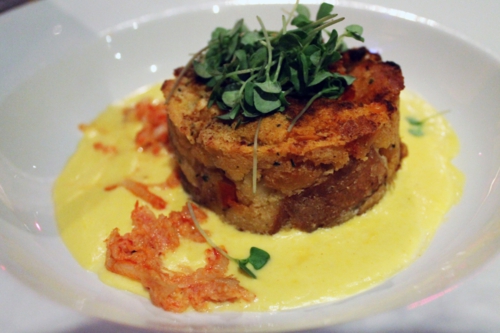 The presentation was beautiful, especially that vibrant pile of pea shoots on top. The sweetness of the lobster meat and the creamed corn sauce were fabulous together, and the dill in that sauce was essential. It somehow managed to be a sweet yet unquestionably savory dish.

World Café Live also impressed with their cocktail list. The first one I had was the Smashing Pumpkin with spiced rum, pumpkin liquor, cream, and Bailey’s Irish cream.

There was something concentrated and tangy on the rim of that glass, and whatever it was tied together this drink perfectly. The coated rim was rolled in graham cracker crumbs and light spices. Each sip with that tang and the richness of the cocktail ingredients was delicious. It’s an excellent dessert cocktail choice. 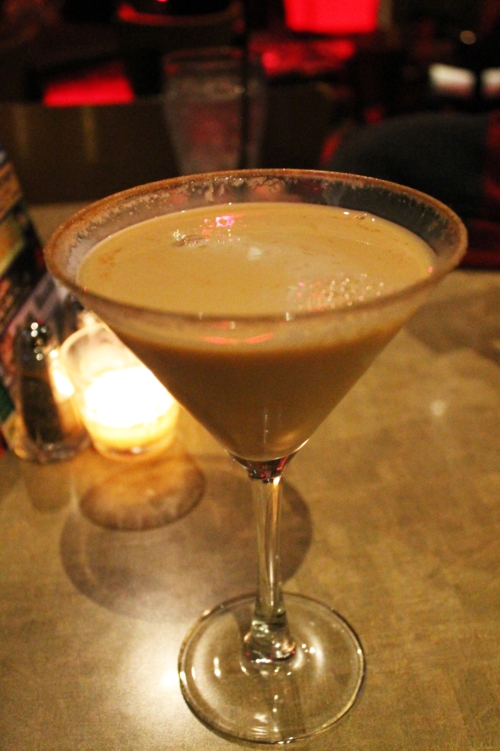 My second drink was less impressive, but I bet that has everything to do with my taking on a gin drink. 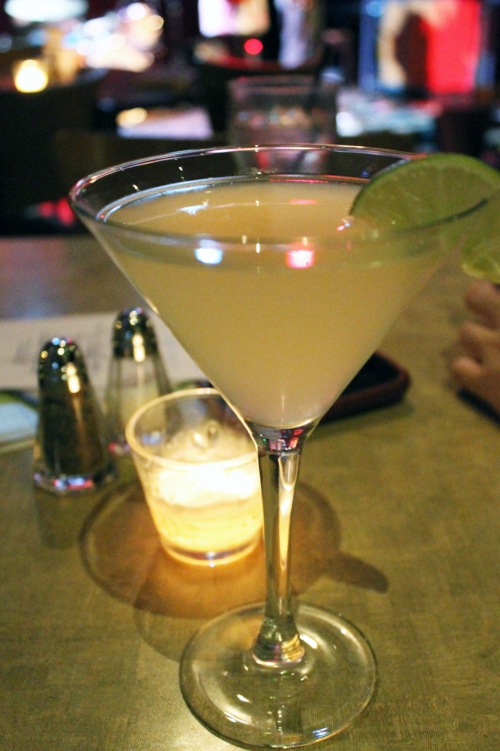 The Cold Gin Kiss is made with Bluecoat gin, lime, lemonade, Canton Liqueuer, and Grand Marnier. I expected more citrus elements based on that ingredient list, but the gin came through super strong—all I could taste was juniper. If you are a gin lover, then it’s probably perfect for you, but it was too much for my palate. My last drink, which was essentially a Manhattan entitled New York State of Mind, was a million times better. It was made with Basil Hayden bourbon, sweet vermouth, and bitters. No picture, but it was an outstanding Manhattan.

We walked back to our hotel after the show, and all those cocktails I just described are probably what made walking past the Rum Bar inconceivable. 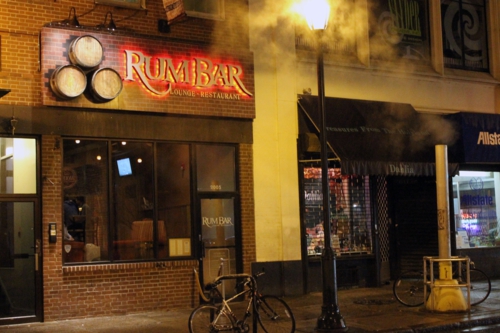 Look at that fog around the streetlamp! How could I resist a rum bar with spooky fog? It’s just not possible. Don’t be swayed by the cheesy pirate in the storefront; it’s actually pretty sleek and modern inside the doors. 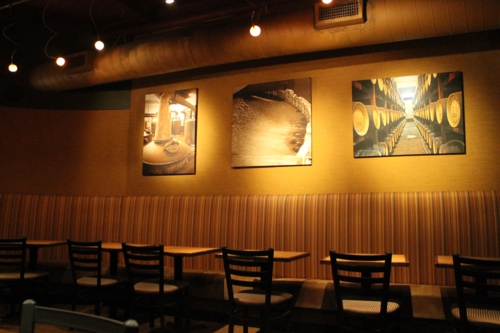 I’d be lying if I said the cheesy pirate wasn’t 8/10s of the appeal of walking in for me, though. The other 2/10s were split equally between the level of alcohol in my system and my love of rum. Speaking of which . . . 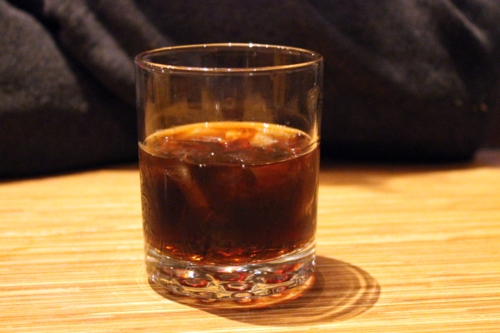 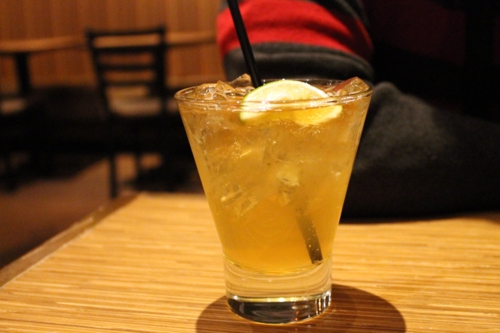 Ben went for something dark and spicy on the rocks, and I opted for a Dark and Stormy, always a good choice when in the mood for rum. And thus endeth the first day of our feasting. The next blog will conquer our second day of food, with treats from the Terminal Market, Indian food, and the reveal of which Philadelphia spot I chose for my cheesesteak.