The Bloody Brunch is a weekly event hosted by Motorco Music Hall and the Ko Kyu BBQ truck that brings together a winning combination for the night owls among us: a brunch that doesn’t start until 1 pm, cool drinks, a market of crafts and clothes, and free music. That’s not even mentioning the chill neighborhood vibe of my fellow eaters and drinkers. Durham lounges well, folks.

Ever since these shindigs started up last fall, I’ve been meaning to go. It only took me, oh, six months to get around to it (you don’t want to know how long I’ve been meaning to go to church on a Sunday and that’s WAAAY earlier than 1 pm). First off, the band, which looks to be playing for all of June, at least, was fantastic. Peter Lamb & the Wolves played a set from 1 pm to 3 pm full of lovely covers of smooth, jazzed up American songbook classics that I could listen to all day. Once you’ve secured some food and a drink, spending the rest of the hot afternoon unwinding to their tunes is very appealing.

It might take you a while to get that food and drink, however, because the Bloody Brunch is popular! I jumped in line at the Ko Kyu truck as soon as I could, with only about 15 people ahead of me, and it took a full half-hour to make it through. 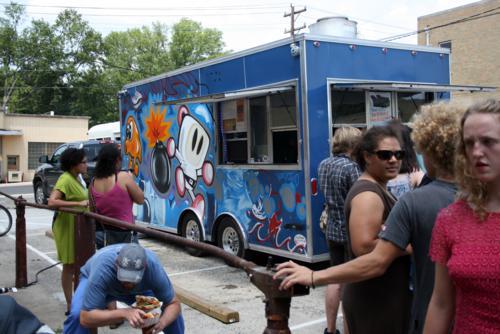 Luckily, I’m a sun lover, so I didn’t mind basking as I waited. It also gave me time to contemplate their menu. 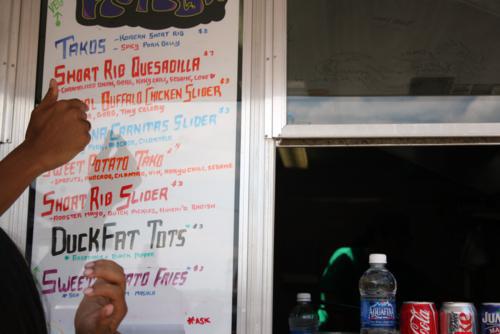 Ko Kyu bills itself as an international bbq and street food truck, which somewhat applies. I’d align it more with a Southern street food mentality, as long as you account for their Korean influences, too. This afternoon they had Korean short rib tacos, spicy pork belly tacos, sweet potato tacos (kokyu chili, avocado, cilantro), short rib quesadillas (carmelized onions, gorgonzola, kokyu chii, sesame), buffalo chicken sliders, carnitas sliders, duck fat tator tots, and sweet potato fries (garam masala seasoning). After exchanging my three of spades for my food, my friend and I headed inside Motorco for a break from the heat and a chance to eat. We finagled standing room near a table and dug in. 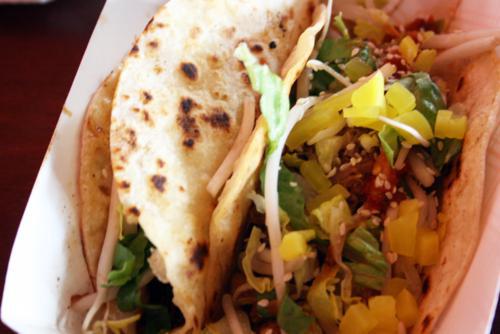 This is the spicy pork belly taco with plenty of complimentary pickled radish shaken on top. Now, I think they were flour tortillas made fresh, but they could have been corn—the memory is fuzzy. Whatever they were, they were delicious, and the ingredients were quality: cabbage, bean sprouts, sesame seeds, and a great sauce for the pork. It wasn’t that spicy, but every bite was great otherwise. 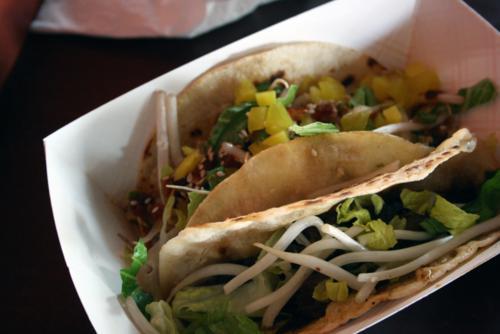 The short rib taco was also delicious, and its Korean BBQ sauce definitely won in the flavor department. 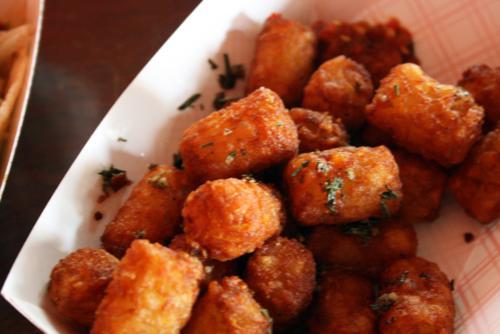 I was surprised to find that the duck fat tater tots really were all that—they’ve been quite hyped up in the foodie community, and the hype is warranted. I’m not sure what the duck fat adds in flavor, but I think that beautiful deep brown fry and the excellent crunch can be attributed to it. Mix those perfectly fried potatoes with rosemary, salt, and pepper, and I couldn’t help but savor each and every one. I especially liked them with a little squirt of Ko Kyu’s chili sauce, too.

Now, I really liked my food, but was it worth a 30-minute wait in the sun? Almost. And if you’re a bigger food truck enthusiast than I (it’s not hard to be), then I’d say definitely. Those ingredients were quality, and if this truck was conveniently located in a shop near my house, I’d be eating there all the time. Prices were about right with most items at $3 each except for the larger quesadilla at $7.

I decided to wash all that food down with a drink from Motorco. I’ve been up and down on my opinions of their cocktails, and the Mocorita is a good one. 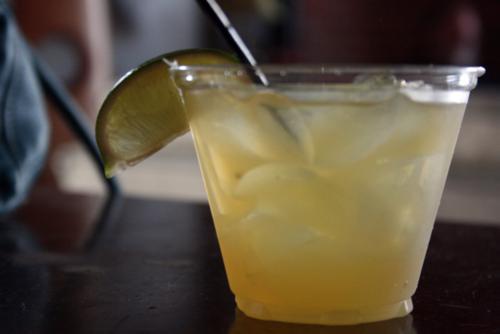 Made with tequila, Gran Gala orange liqueur, lime, and a fourth ingredient I can’t recall, it was a refreshing take on the traditional margarita. It was less sour than the standard and made nice and smooth by the choice of Gran Gala, which really pulls this drink together. Perhaps a bit overpriced at $6 for a small glass, but if you need a thirst quencher on a hot day, it’s worth it.

In Motorco’s warehouse space on this afternoon, a craft and clothes market was also on hand, mainly showing off shirts and purses along with a row of soaps in the back. Parlour, the new gourmet ice cream truck, was also at the site, and the Indian food truck was just across the block at Fullsteam, so options are many.

The Bloody Brunch is a great option for a lazy Sunday afternoon. Just be prepared for a sun-filled wait at the trucks!

4 thoughts on : The Bloody Brunch (Motorco and Ko Kyu BBQ)