Tribeca Tavern, mainly a burger and sports venue, is an impressive view from the outside. 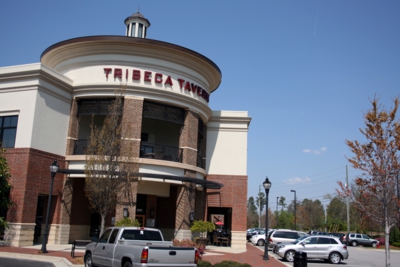 It dominated the entry to this cute shopping center. There are two floors inside with lots of space and outdoor dining, too. Televisions are everywhere, including small ones in individual booths. The decor is light wood and patterned fabrics of blue and reddish oval polka dots—not an exciting ambience for this lover of inviting, modern styles but not off-putting either.

There is plenty to choose from on Tribeca Tavern’s menu including sandwiches, simple burgers with crazy meats (bison, crab, lamb, Kobe), crazy burgers with simple or crazy meats on a separate chef’s menu, pizzas, desserts, appetizers, salads, shakes (toffee coffee and cinnamon cookie are two of the fun options), alcoholic shakes (too many fun options to list), local brews, and a cocktail list. There’s also a nice range of side dishes—I love when I can choose fries rather than have it assumed I want them. The burgers are pricey for a few reasons including the many meat options that are ground in-house from animals raised on grass and milk and the locally sourced products including lots of cheeses from NC, though there are also some great imports from Italy, Wisconsin, and Cali. I did feel like you could taste that freshness in the meal, which makes the extra expense worthwhile to me.

I opted for the Blue Devil Burger from the chef’s burger menu on this afternoon. The toppings included cajun spice, buttermilk blue cheese, peppered bacon, fried jalapenos (they were accidentally left off), lettuce, tomato, and onion. 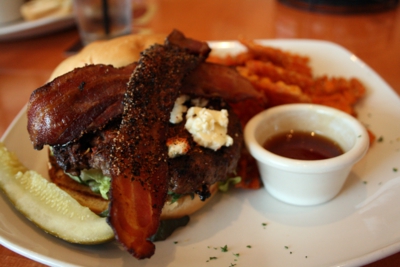 Huge points for the burger presentation. The bun was not exciting, but the rest of it was oh-so-good. I missed the jalapenos, but the cajun spice had a good kick. I wouldn’t want the bacon any way but peppered, and it was cooked perfectly crisp, not greasy at all. The meat was tender and juicy, and I usually like my meat well done, so I’m impressed that it stood out for me. Loved the blue cheese, but it was overwhelming—not pungently so, but its flavor definitely was the most prominent part of the sandwich. 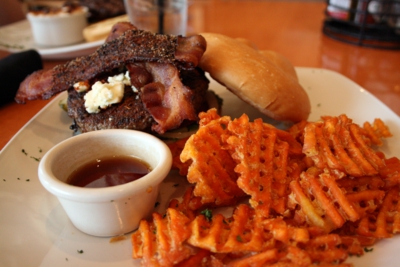 Worth their own close-up were the sweet potato fries. I’ve never had them waffle cut before! I liked the light, flaky batter, and the cut was fun. A little of their flavor was sacrificed for it, though, but the sweetness came through just fine. The rum and honey dipping sauce was delicious, but I thought it too sweet for the fries in combination with their natural sugars. I’d take that sauce on about anything else, though.

The desserts sounded amazing. I couldn’t pass one up. 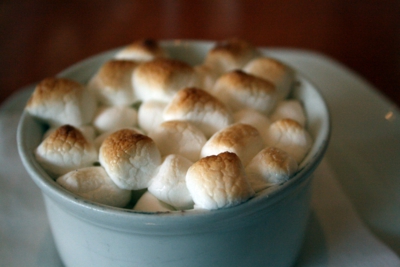 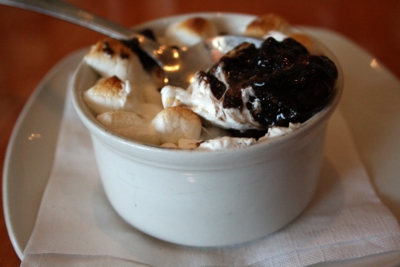 Digging down to the chocolate!

My s’mores dessert, as you can see, came in a ramekin. The fluff mentioned on the menu was actually small marshmallows. The dessert was layered with a deliciously fresh graham cracker base, a rich chocolate sauce that was a step more luscious and thinner than hot fudge sauce, and those marshmallows that were toasted under a broiler of some sort. Folks, it was divine. Getting a small bite of all three key elements was tasty, tasty, yum, especially if the toasted shell of a marshmallow came off, giving a whole new level of texture to the dish. Did I mention I loved it?