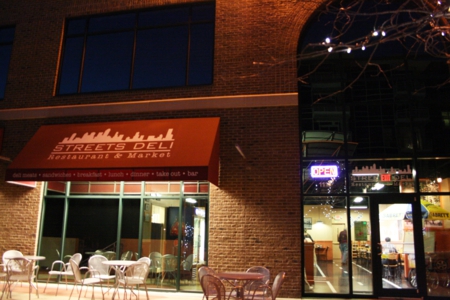 Streets Deli, a new eatery in the East 54 development on the way into Chapel Hill, aims to be a big city, Jewish deli in a small city setting. The space is rather large with two huge rooms, one with paintings of street scenes and the other with street signs on the walls. There are also lane markings on the floor throughout the restaurant. 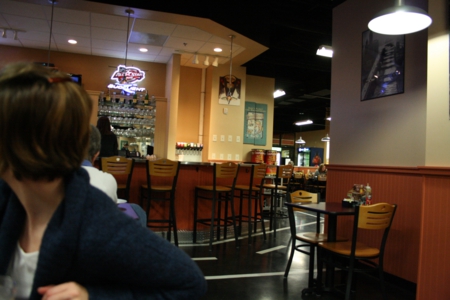 Sit-down, full-service dining is available, but you can also stroll on over to the deli case to order what you’d like to go. Take a gander at the rotating dessert selection and the meats on display while you’re at it. I noticed Boar’s Head prominently featured, but their website also says that Streets Deli makes its own corned beef, brisket, turkey breasts, chicken soup, and some other offerings.

Additionally, and perhaps their best feature, barrels of pickled cucumbers, peppers, and green tomatoes reside behind the counter and there are whole smoked whitefish and sausages in the case. Various items are brought in from Chicago, New York City, and Philadelphia. Their Mr. Pickle logo is rather hilarious, too. A mixture of pickles either jumps in your bag or come out as an appetizer before your meal. 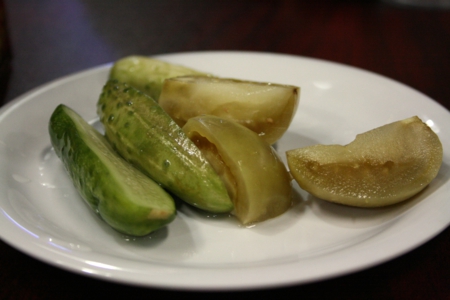 Pure salt and vinegar flavored these offerings. The pickle was fabulous, but the tomato was rather odd and may have benefitted from some herbs in the pickling mixture.

Streets offers a variety of salads, wraps, and sandwiches including their “really, really big stuffed sandwiches,” which appear to be their main attraction. Now, I can’t say I’ve ever been in a traditional, Jewish-style deli, but I didn’t find a lot appealing about those sandwiches. Untoasted bread and piles of meat were all that was involved, though lettuce and tomato come along if you ask for them. My dining companion has tried them a few times now, and she hasn’t found it an exciting sandwich. I think I’m not a big enough meat fan to find a sandwich that plain appealing. I need a multitude of toppings! And thus, I went for the coconut waldorf salad. 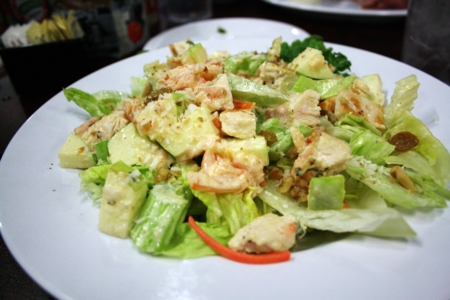 Here is where I started noticing a theme—a lack of flavor, specifically. There was a lack of ingredients, also, because that salad had hardly any walnuts for a waldorf and I’m still unsure where the advertised granola was. The coconut was definitely a great idea to add to a waldorf salad, and I dug the mellow, sweet honey and lemon dressing, but otherwise, this was a dish that needed . . . more. Well, less iceberg, thinner celery slices, a mix of lettuces, more apple, more tomato, more flavor! The chicken was surprisingly juicy, but I finished my plate wondering if I’d actually eaten any calories at all.

My husband was not much more impressed with his specialty sandwich, the Flyboy. It came with rare roast beef, russian dressing, coleslaw, bacon, and provolone on rye (untoasted) bread. Mr. Gourmez opted for the potato salad out of the chips, coleslaw, chunky applesauce, baked beans, and health salad sides. I found their basic green salad being called a health salad pretty amusing. 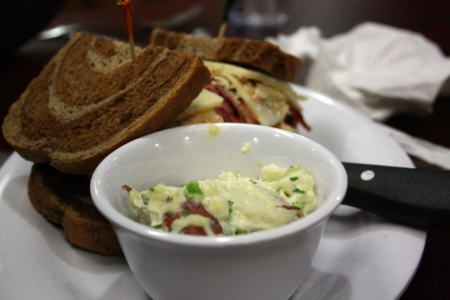 Mr. Gourmez felt the same as our friend and I did—not enough flavor. Toasting the bread would be a big plus, and the rest of the ingredients except the bacon were in small enough proportions that he wasn’t sure they were there in hindsight. It was a good sandwich, just not what we’ve come to expect from sandwiches at sit-down restaurants.

We were satisfied with our meals, but I don’t see myself returning to Streets Deli. Satisfying is fine, but it would be a lot more worthwhile if the sandwiches and salads weren’t in the $8–$10 range. If you’re a big city deli fan and you’ve been, I’d love to hear your opinion of Streets. I’d also love to know if anyone’s tried the fish or desserts!