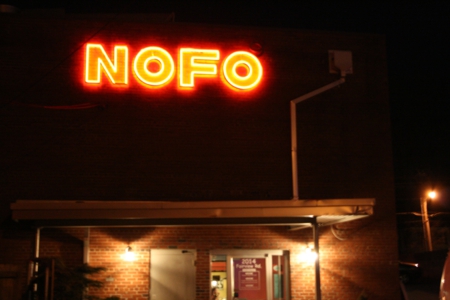 NOFO @ the Pig is a nifty mixture of gift store, food market, and restaurant. My companions and I had a fun time trying to guess what NOFO could stand for, since we weren’t north of any street that started with Fo. Lo and behold, the Internet! NOFO @ the Pig is one of three stores named for the original NOFO, or North Fourth Street, in Wilmington. We were there at night, so the shop, located on the top floor, was closed, but it looks awfully inviting for gift shop explorers like me. Whimsy best describes the restaurant’s atmosphere. 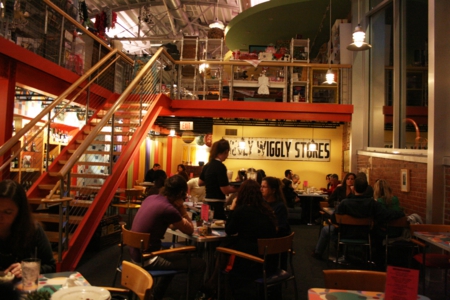 Apparently, this is the former site of a Piggy Wiggly, and NOFO has reclaimed some of the store’s fixtures as design elements, along with a circus’s palette of colors and polka-dotted tables. It’s a great atmosphere—don’t miss the central chandelier with glass-blown pigs!

We started with a couple of drinks from the bar, and they most certainly made a good mint julep. 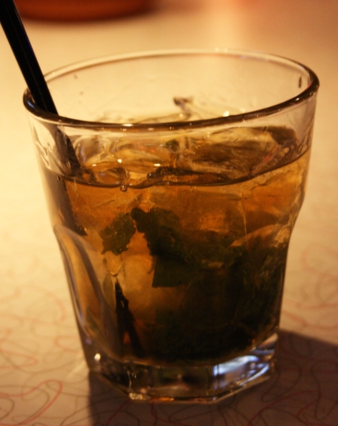 Of course, that could just be the bourbon talking, but I love when a place excels at a standard drink. One of our dining companions ordered NOFO’s award-winning bloody mary that looked and tasted smashing. 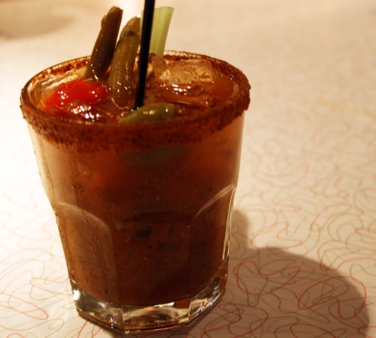 It also had a garden’s worth of garnishes. NOFO has a range of menu items, from inventive sandwiches like shrimp burgers with lime tartar sauce to pastas with tasty mixes of ingredients to pork tenderloins with sweet potato hash and pear butter. It’s definitely Southern-leaning, but I wouldn’t say every combination fits that bill. Mr. Gourmez and I decided we’d each order a salad and then split a small plate on this evening. 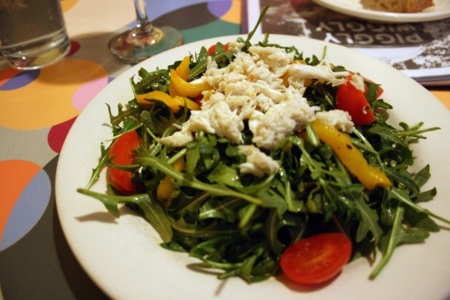 I had a special salad with fresh crab, arugula, yellow bell pepper, and grape tomatoes with a sweet, light dressing. That arugula was topnotch, and I enjoyed the dressing’s flavors, but more crab would have been an excellent idea or perhaps more of a crab-mayonnaise mixture.

My husband had a beautiful salad made with goat cheese, mixed greens, mandarin oranges, candied pecans, and red onions. 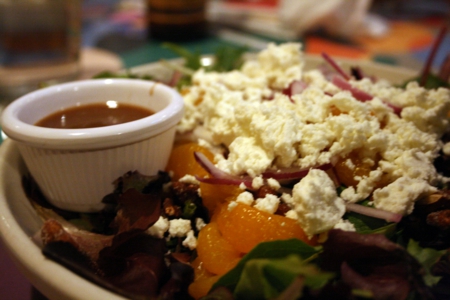 He thought it was pretty good. 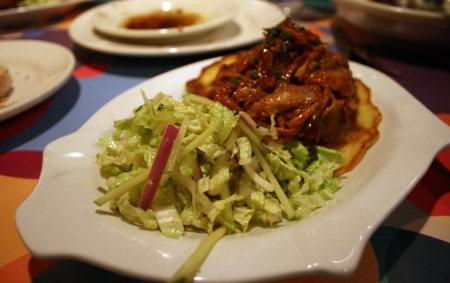 That’s pulled pork on a cornmeal pancake with apple coleslaw on yes, a pig plate. It was a great dish! I dig NC barbeque when the sweetness of it takes over, and it definitely did in this dish. It combined amazingly with the pancake. Our friends thought the coleslaw added the perfect final touch, but I found that aspect of the dish forgettable. But the barbecue and pancake? Fantastic.

Despite my salad needing a bit more to make it stand out, I would definitely go back to NOFO and gladly. I recommend the pulled pork heartily as well as the cocktails. Perhaps pass by the salads—everyone at the table had one but none of us thought them exemplary—and head straight for the entrees. Don’t forget your drink!