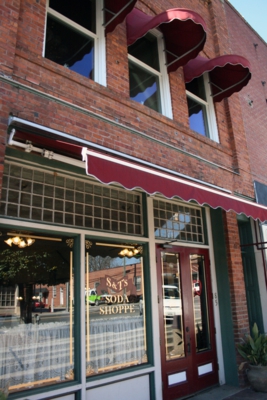 I first heard about S&T’s on the Girls with Guts’ blog a few months back. I must mention that their primary claim to fame is their ice cream dessert prowess, and Mr. Gourmez and I did not have the stomachs to try it this time. We did, however, have their old-fashioned sodas mixed with syrup and club soda to order and lunch. This two-story location was a pharmacy and soda shop starting in 1916, with a few other businesses taking up residence between then and now. It’s been restored to resemble its original shop with wooden booths, family-style seating, and antiques from old pharmacies in the curiosities cases. 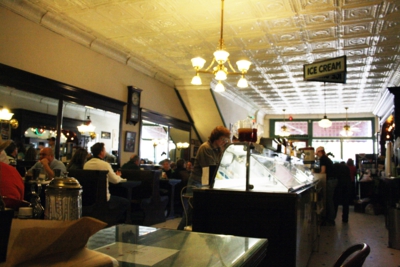 And it is popular! S&T’s was crowded full of Pittsboro residents for lunch time when we went. Service is fast and friendly, including the speed at which our food came out. But first, the drinks. 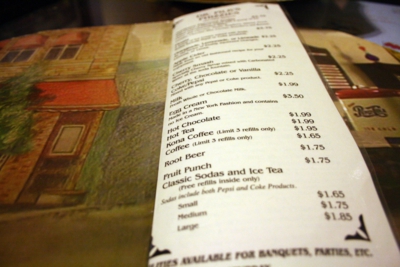 I did think the menu was rather cute. This is a list of their drinks. 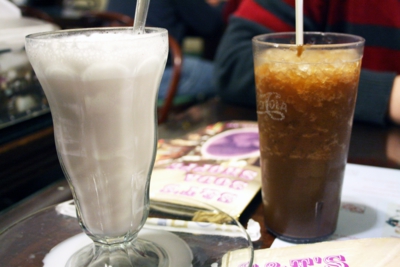 I ordered an egg cream, which did not actually have an egg and was just a cremosa, or italian soda with cream, in simpler terms. You can pick from a variety of syrup flavors—I opted for raspberry. It was fine though a little too heavy on the milk. Mr. Gourmez had a chocolate coke, and I liked the texture of it though he thought I was odd for being so interested in it (what else is new?). For drinks, you actually get free refills in house, which was surprising. The menu only lists the basic sodas and iced tea as refillable, but the chocolate coke was refilled no questions asked, and I was offered a refill on my egg cream.

We split an order of onion rings, and I had their cheeseburger with toppings of lettuce, tomato, onion, mayonnaise, and coleslaw. Mustard, ketchup, and pickles were also options. 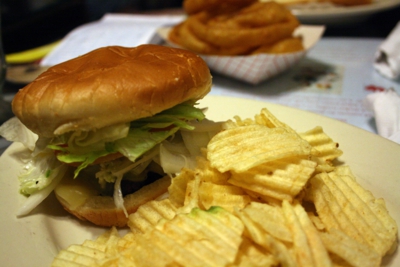 The onion rings should have been crisper, but they had nice flavor. The chips were included in the price. Now, the bad as far as I’m concerned was that the bottom bun was very soggy and the coleslaw especially sweet, giving each bite a flavor that it definitely didn’t need. However, I found the meat—a round and thick lump of beef—tasty and worth savoring. My swiss cheese was right on the edge of melty gooiness, a texture that I love. Leave off the coleslaw and the burger’s a good choice.

Mr. Gourmez had a foot-long hot dog with ketchup, mustard, relish, and onions. 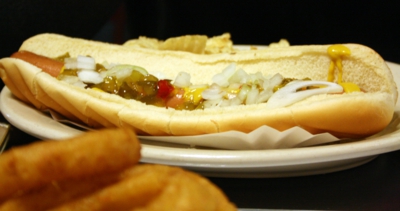 It hit the spot.

S&T’s Soda Shoppe also offers barbecue, fried chicken, corn dogs, sandwiches, and salads. I hear the lasagna is to die for. I think downtown Pittsboro has too many other options (Angelina’s Kitchen, I’m looking at you) for me to head back to S&T’s just for the food, but I will be back to try their desserts next time I’m in town. It’s a valuable option for meals if you’re looking for cheap eats, too.