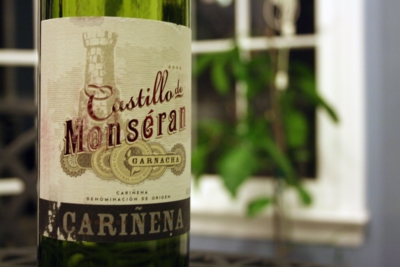 The nose of this Spanish wine is full of spiced strawberries. When drinking, the strawberry is joined by raspberry and a helping of twigs from the bushes, giving it a nice, earthy quality. The spice is still there but not as strongly as in the nose. It’s highly drinkable and enjoyable, if perhaps a bit too thin.

An outstanding buy in a flavorful, fun, soft red. Dark ruby with a slight purple tinge at the rim. Bright, ripe, fruity nose: raspberries and ripe cherries, along with a slight herbal, minerally component (but mostly it’s about the fruit). Loads of crisp, minerally raspberry flavors, with good concentration and a soft texture. Nice balancing acidity too.

Very fruit forward wine. The nose was strawberries and raspberries, with some spice notes thrown in. Got a little anise note as well. The palate was very fruit forward with lots of raspberry and strawberry, and a little plum. Not as much of the earth and peppery spice as I would like, this one was a little short in overall depth. Light tannins and a medium finish . . . I was just a little disappointed with this one. Not a bad wine, just left me wanting a little more from it.