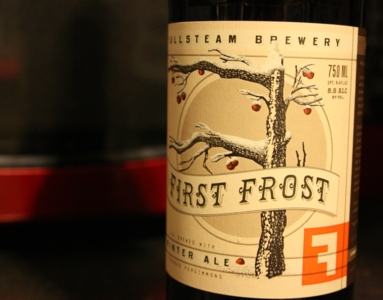 Getting word of this beer’s production is what first introduced me to Fullsteam and their Southern-agriculture-inspired brews. I adore persimmon. I believe persimmons (and avocados) are a gift from the gods, and the label on this very limited edition bottling (mine is #402 of 800) agrees as it expounds that “it is not until after the first frost that persimmon turns from astringent and bitter to a luscious fruit worthy of the gods.” I felt that way about persimmons long before I knew the word translated to fruit of the gods.

Fullsteam’s crew harvested the persimmons around Chatham County for this Forager beer just a few short months ago. The fruit was added at primary fermentation, and the label informs me that no spices were mixed in—if you know persimmon as I do, you know that this tasty fruit magically has natural cinnamon flavor in it. Now, if all that build up to a beer brings you as much anticipation as it did me, then prepare for my tasting notes. Keep in mind that I’m not a regular beer drinker. 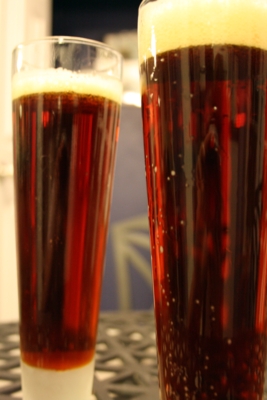 It’s the sort of beer I like, a tad bitter but mellower than it looks, and smooth in body and flavor. The persimmon presence is very, very light. It’s a fleeting taste at the forefront of the gulp that teases me then runs away to take a backseat to the rest of the brew’s elements until the last few seconds of flavor, when it rushes back to bid adieu. Its richness does add some body to the beer as well, but this is not a fruity beer by any means. That’s a good thing, in my opinion. I like when flavors play coy with me.

Fullsteam’s Lost in the Trees is the better beer for my money, but this is another good option for me. Of course, the Fullsteam beers I’ve liked the best have been the most limited . . . perhaps that is a sign that beer drinking should remain a rare occurrence for me?