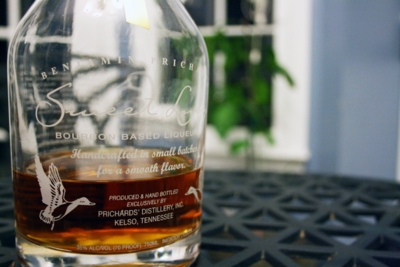 This liquor smells like Wild Turkey American Honey liquor, another bourbon-based one. That’s a rather good sign as I love that stuff. The color is rosy amber.

I want to dislike it, but I’m not going to lie. I enjoy it! It will find a cocktail home.

Like many a whiskey-based liqueur before it, Prichard’s rendition is overwhelmingly, well, sweet, a syrupy concoction that is overwhelmingly sugary, but which offers vague Bourbon character in the finish. With this much sweetness, it’s hard to really differentiate; if you’re a fan of American Honey and its ilk, you’ll find Sweet Lucy just as satisfying

The nose has a heavy note of cinnamon or allspice, and a rich orange peel character. This is very sweet on the palate. The flavor is rich orange and apricot. Slight spice notes are present and the bourbon character is there but subdued. A very well-made sweet liqueur with a nice layer of bourbon and spice underlying the fruity sweetness.

So perhaps apricot was the flavor I couldn’t put my finger on? Sounds likely.