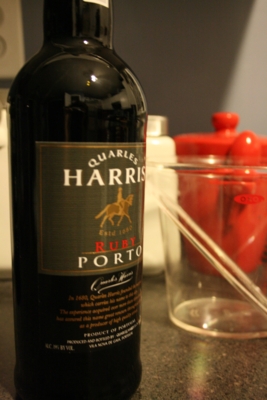 The smell of this port is unappealing, like glue. Luckily, I already know it isn’t a bad bottle, because I used it in a cranberry curry sauce the other day, and there was no sign of foul tastes, so I’ll carry on past the nose—okay, I’d carry on past the nose regardless. When drinking, there’s a brief citrus burst at first, then fig takes over and an intense brown sugar taste swells up. A dash of creamy milk chocolate and a hint of coffee are also there, but they are so fleeting, I can’t really call the wine complex. It’s a pleasant port to drink even if it could use more depth. Luckily, it tastes nothing at all like the nose, so swill away!

Over the last weekend we opened a bottle of this dark, rich, ruby goodness. I thought it was quite tasty . . . A good full bodied Port like the Quarles Harris does have somewhat of a sedative and calming effect on me as well. By Tuesday night, I was enjoying sips of the final glass, savoring its sweetness. It was all of about $12, reasonably priced. I’m not a Port snob, “it’ll do”.

After chilling for a while, this is the perfect late-night port. It lasts at least 2 weeks refrigerated and never lost its raspberry/blackberry flavor which comes close to hazelnut on the finish. I believe it was very cheap and it has surprising depth for such a youthful wine. It’s not something I would show-off or drink as an aperitif, but it’s great after 4–5 glasses of tannic red wine. It is bright and fruity.