Through the airplane window, many small islands floating in a blue-tinged crystalline sea slowly gave way to a larger one-Jamaica.  Immigration was the first stop after arriving.  The lines weren’t bad; it took about 20 minutes to make it to the officer.  A quick “vacation” was all we needed to say in answer to her questions and she wished us well on our trip.

Suitcases were claimed next and then we breezed through the Customs line as they just take a quick glance at the cards you complete on the plane. Remember to keep the bottom part for when you return!  If I hadn’t had stuck mine in my passport, I’d have forgotten entirely.   Around the corner, the hall was filled with resort waiting areas and we were quickly ushered into the one designated for Sandals.  Men tagged our suitcase and our carry-ons so fast that we didn’t notice until we saw the blue tags dangling.  We were told it would be 20 minutes until the next bus but as soon as I caught sight of the Sandals bar and dreams of my first included margarita danced before me, “Sandals Grande Ocho Rios” was called out.  We met up with the baggage handler, who led us out to the bus and asked for a tip.  I gave him $2 and we got on.

And waited.  And waited.  In the meantime, the rows of aging frat boys and their excited wives decided that more alcohol was in order.  Three of them left and came back triumphantly holding a flat of about 20 Red Stripes.  The price?  $105.  I guess the sky’s the limit when you’re a white boy in need of a drink in Jamaica, though I was a little jealous as I was still dreaming of that margarita.  By the time we hit the road, the beers were already consumed.  This was not a good omen.

My camera started snapping the moment I could see anything more than concrete and fences.  The first part of the drive goes through Montego Bay and the driver was quick to point out all the resorts, though he was hard to hear over the din of the now drunken passengers.  On my side–the ocean, palm trees, and lots of greenery. 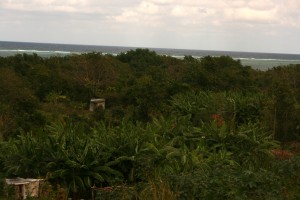 On the other side–rundown roadside stands, shacks, and a few suburban dwellings. 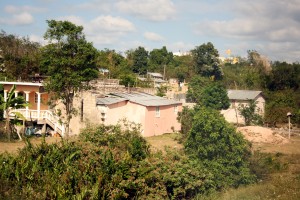 Jamaica is a third world country but the concept of staying in a shack so close to the beach does have its charms.

The water is a lovely turquoise close to the shore and I never get tired of staring at flora and fauna, so, despite the loud neighbors, the ride was enjoyable.  Lots of goats, chickens, and dogs seemed determined to become roadkill as they would wander onto the road constantly.  We also passed many students in uniforms coming home from school and the occasional adult walking along.

We stopped about an hour from Ocho Rios at a bar and jerk shop for a quick break.  By report of the middle-aged frat men, beers were $4 and mixed drinks were about $8. 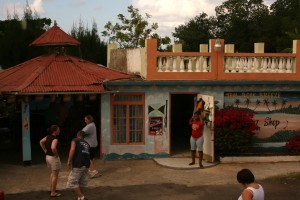 Half an hour later, Ben and I exchanged annoyed glances as chants of “Are we there yet?” started up with the drunken passengers.  Apparently, they had forgotten that liquid in=liquid out.  I breathed a sigh of relief as we reached Sandals Dunn River and the majority of the passengers got out and ran for the bathrooms.  Luckily, this was the destination for most of them.  Our resort, Sandals Grande Ocho Rios, was next and the registration procedure was quite confusing.  If you go, do not try to get your bag first, just head inside, refresh yourself with a proffered hand towel, and relax until the registrar comes up.  They registered about five couples in a large group and I busied myself with drinking the yummy rum punch as we listened.   When ready, a bellboy will take you and your bag to your room by golf cart.  Be prepared to tip him, even though tips are not required for Sandals employees.

We found we’d been upgraded from a manor deluxe room to a plantation villa, which was lovely.  These buildings are divided into three rooms and the pool is shared by all of them.  Don’t go in it, though!  It was freezing and probably doesn’t warm up well for another month or so. 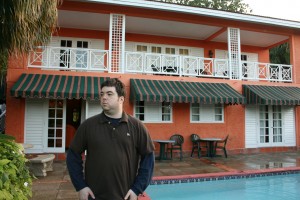 That evening, we spent lots of time wandering around both the Manor and Riviera hotels, as Sandals Grande Ocho Rios is divided into two hotels separated by a road.    There is always a bar nearby to grab another drink.  They know how to make most everything; I had pina coladas, daiquiris, white russians, and plenty of merlot.  All the frozen drinks come from a slushee type of machine; the bartender adds the alcohol after.  The Bloody Marys had the perfect amount of spice and beware of the poolside bar’s rum drinks-strong stuff! 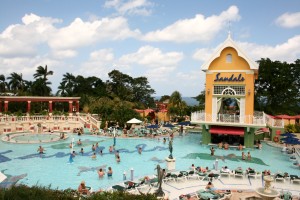 Swim on up to the bar on the right.

As for the food, it was also included in the price.  Breakfast and lunch were available at two different buffets and we had the choice of about 8 different restaurants for dinner.  Of the three we went too, only San Genarro’s exceeded buffet quality food surpassing the offerings at the formal restaurant, Orchid’s, that we tried out the night before.  There were also two grills open until 1am in case you needed a midnight snack.  Popcorn and nachos were always within reach as well.

We spent most our days lying out by the pool or the beach, and really, who can blame us? 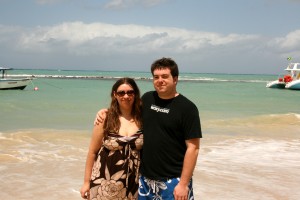 We also attempted a rock wall one morning, 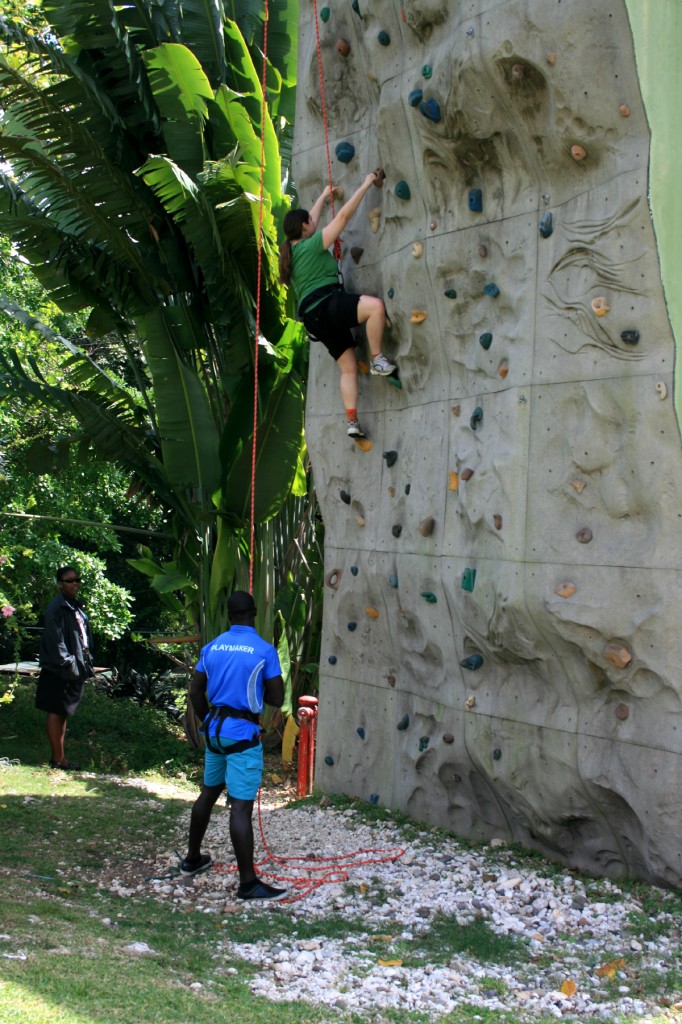 played some tennis, and went on a canopy tour led by the Chukka Tour Group.  I’d recommend it but beware, the actual adventure takes 2 hours but it also took us about an hour to get there as the bus stopped at various other resorts on the way, so all in all, it took about five hours total.  The excursion consisted of ziplines through mountainous, forested terrain.  Even though I’d ziplined before, I still had quavering legs for the first few jumps. 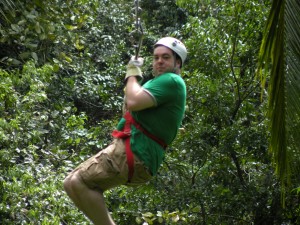 It was great fun, though, and I love adrenaline rushes.  I only wish the lines were a bit longer.  We ended up by a roaring river and took a nature walk back to the buses waiting to take us to the resort.  Tips are necessary for these excursions as well, for your driver and the tour guides.

Nighttime, the resort usually had entertainment arranged for the masses, though the place never felt that crowded.  I spent an evening singing along at a piano, when strong-armed by another guest who wanted people to sing with him. We also went to a beach party where reggae musicians played. 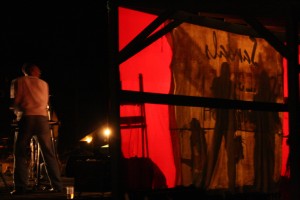 Reggae Musicians from the back.

A steel drum band performed on the last night.  These people were so fast, I couldn’t get a good picture no matter how I tried. 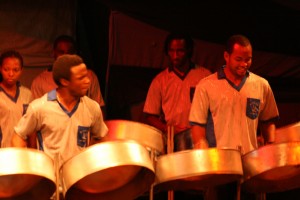 We went to a line of yellow huts just outside of the hotel for our souvenir shopping; it was called Coconut Grove, which after having been to a number of Coconut Groves in my life, I have determined is a very popular name in beach towns.  Haggling wasn’t too bad, for which Ben and I were grateful-bargainers, we are not. 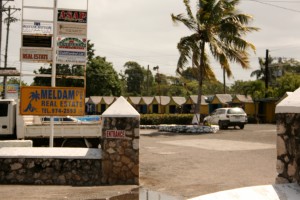 Far too early on Sunday morning (5am), we took the two hour journey back to the airport.  No good pictures came of that; it was too dark most of the trip.  Overall, I would definitely recommend Sandals Grande Ocho Rios as a good deal for a relaxed, resort vacation to Jamaica.  It’s hard not to feel content, when you are steps from this for three days. 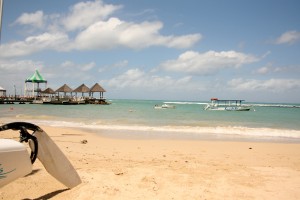 Another day to hit up the snorkeling or take a boat ride would have been fabulous, but I can’t complain, really.

If we go again, though, I might want a more local feel and stay at a bed and breakfast or one of the smaller resorts located in one of the larger cities.  I had two helpings of jerk chicken while there, which was tasty as usual, but I’m not sure that I quite got the feel of the country.  People were usually quite friendly, but of course, they are paid to be so at a resort!  One thing’s certain, I can’t stop thinking, “No problem, mon” whenever I finish a sentence now.