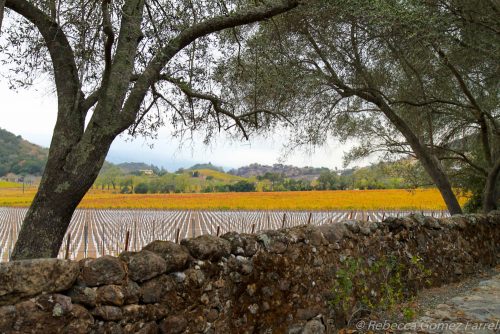 On a pre-excursion to the 2017 Wine Bloggers Conference (WBC), I had the pleasure of touring and tasting at two estate wineries in the Napa Valley. As they were part of the WBC, these experiences were steeply discounted, so consider that my obligatory disclaimer prior to diving in to this blog. Or driving in, as the case may be. Tamara Stanfill and Robert Ord from Treasury Wine Estates (TWE), which owns both wineries, were our hosts for the adventure, and they served us up tastes from another TWE property, the historic Chateau St. Jean in Sonoma Valley, during our bus ride. 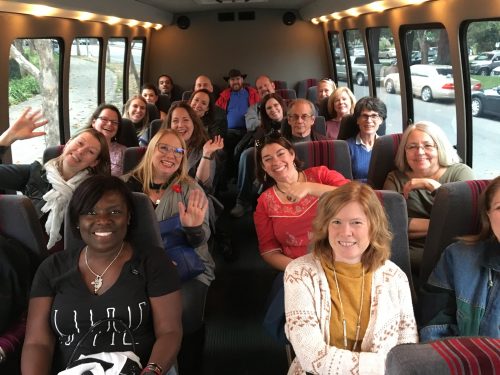 You can read about the cheese and wine pairing tasting at Chateau St. Jean in my previous post here. Suffice it to say that the 2014 Chateau St. Jean Chardonnay (4.5/5) blew me away on both occasions with its savory notes and spritely acidity of lime and pomelo.

Stags’ Leap Winery, our first destination on the pre-excursion, is even more historic than Chateau St. Jean. On an overcast afternoon, it’s more ethereal as well. 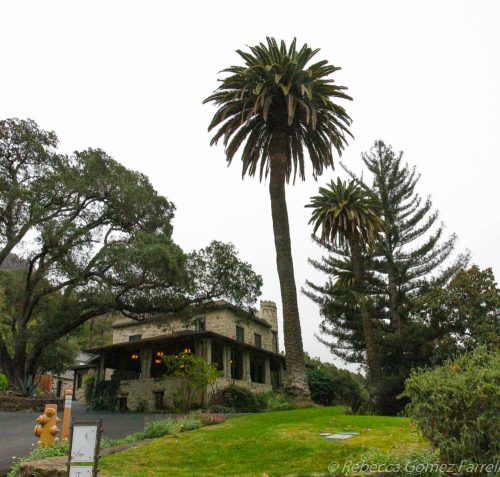 The estate’s first vintage came about in 1893, though grapes first graced the land in 1872. The symbol has remained the same, an illustration of a Wappo legend of a stag leaping over a nearby craggy natural palisades to escape hunters. 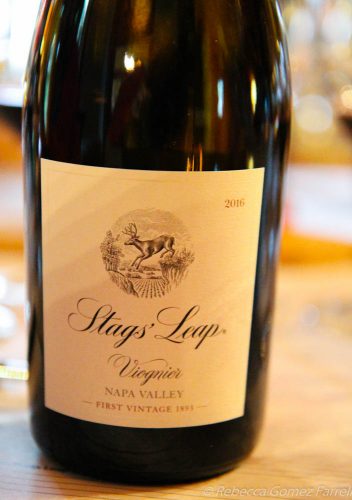 The Stags’ Leap region is its own AVA within the Napa Valley, with 17 members of its business association. Indeed, the AVA is also home to Stag’s Leap Wine Cellars, but you’ll know you’re in the right place if that apostrophe is for a plural possessive and you’ve called to make an appointment—Stags’ Leap Winery is open by appointment only and farther off the beaten path than the Wine Cellars that shares its name.

It is worth it to make that appointment merely to see the manor house that has served as a family home, a resort, and a retreat for naval families. Perhaps most enticingly, it hosted a speakeasy during Prohibition with the bar located below a trapdoor in a U.S. Post Office outpost. 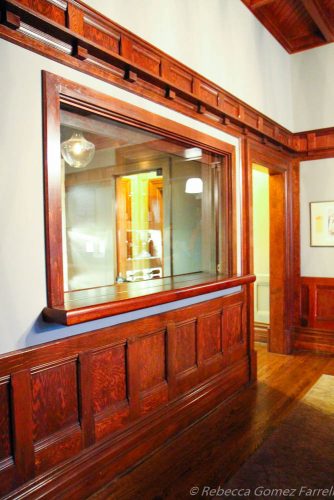 The grounds and view from the manor house are lovely, and so are the wines that Christophe Paubert, a native of France, has been producing since 2009. 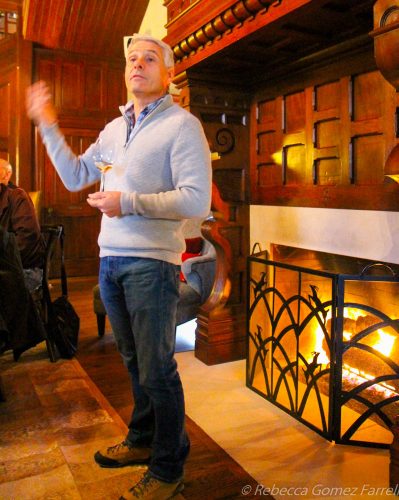 Paubert led us through five of them, though we started a little earlier on the patio with a sixth, the 2016 Stags’ Leap Winery Napa Valley Viognier (4/5). 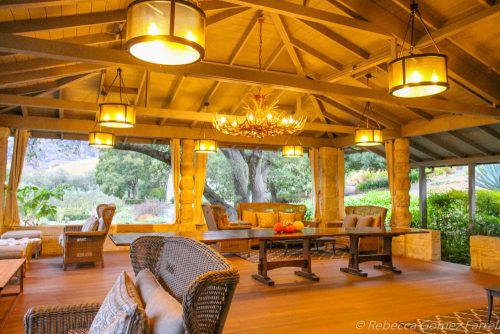 I thought it about as crisp and clean in taste as a viognier can get. It’s a wine that cools you off, whether needed for the weather or your mood. And it’s done in the traditional French style that Paubert excels at.

While I found plenty to revel in in both the 2014 Cabernet Sauvignon and the Block 20 Merlot, it was the 2014 Ne Cede Malis Petite Sirah that took my highest rating of the tasting: 5/5. 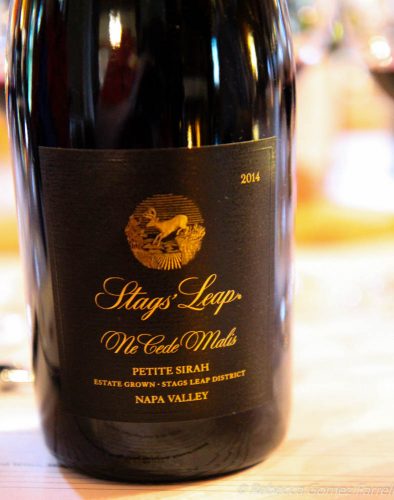 It possessed a delicate floral presence, like tiny blossoms you’re afraid will fall if touched. The fruit tasted as though picked at maximum ripeness, when you can’t stop popping berries in your mouth, and displayed beautifully balanced tannins. At $100 a bottle, its average price per Vivino.com, it’s a little bit of heaven for a special occasion.

Our blogger special occasion called for dinner next! We rode farther south in the Napa Valley and arrived at Etude Winery, a much younger estate in the Los Carneros region…if a 1982 founding can be considered young. I ran up the drive to get a snapshot of Etude’s colorful grapevines as the golden-hour twilight twinkled out. 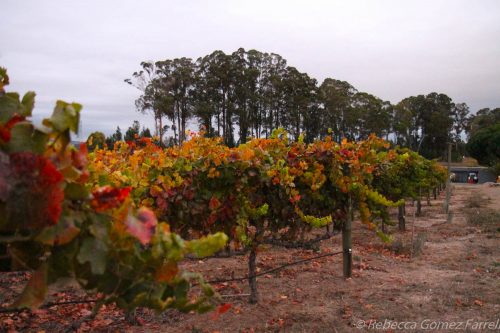 Winemaker Jon Priest gave us a quick tour of Etude’s barn cellar then led us into the tasting room, where dinner, catered by Sonoma’s the Girl and the Fig, awaited… 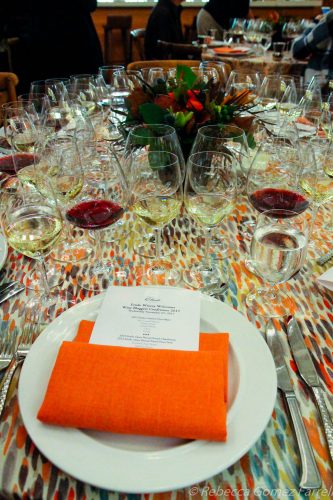 …along with another tasting flight, of course! Priest told us all about Etude’s wines as we ate and contemplated the pairings. “I don’t have dogma until it comes to pinot noir,” Priest shared, taking us through four of Etude’s pinot noir offerings. 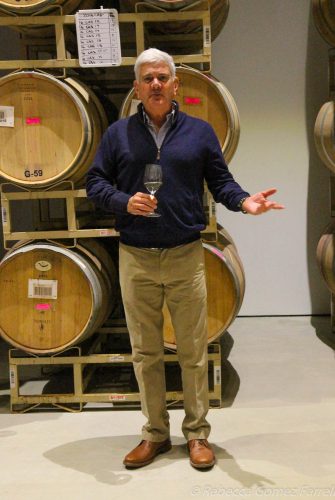 Pinot noir is the winery’s specialty, whether featured in estate wines from Grace Benoist Ranch or in their AVA series, which explores pinot noir from other regions of California. The best pairing came from that AVA series, which combined this delicious entrée of smoked duck breast, shelling beans, peppers, and demi-glace— 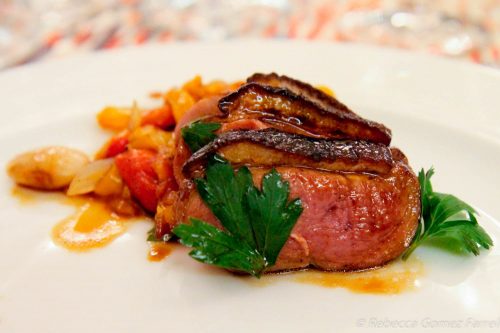 —with the 2015 Etude North Canyon Vineyard Santa Maria Valley Pinot Noir (4/5). I found the wine’s white pepper and strawberry notes a natural fit for the duck, though I surprisingly also enjoyed it with the 2015 Etude Grace Benoist Ranch Chardonnay. 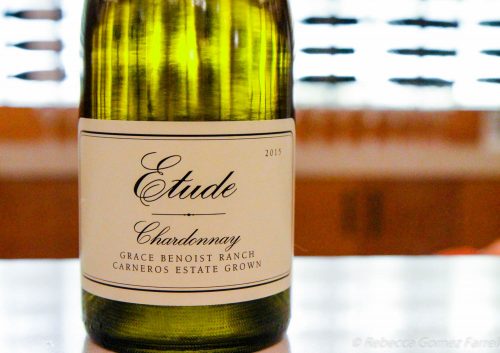 That wine took home my highest rating from Etude (4.5/5), awarded for its well-balanced jasmine and grapefruit notes and its smokiness that drank in the duck’s savory rub. The result was a study in acidic contrast with an earthy entrée that I’d be happy to repeat again.

The highlight of the Etude portion of our excursion, however, was getting to try their XO Alembic Brandy, made from 100% pinot noir grapes. 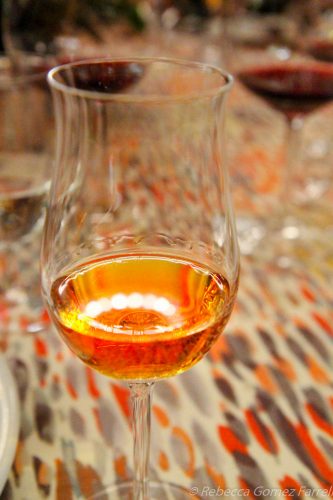 Spice built up as the brandy lingered on the tongue, though first impressions were of dried petals and candied Seville orange rinds. Dear reader, it was strong and it went fast. I admittedly added a second round to my coffee as dessert approached. 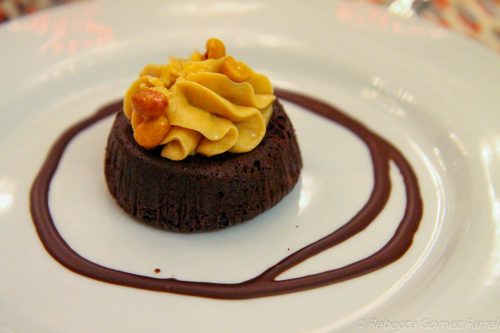 You can bet that peanut butter mousse on that flourless chocolate cake amplified the brandy’s nuttier notes. The liquor is a blend of brandy barreled from 19 to 35 years, which was housed in the present-day tasting room before Etude Winery purchased the property—and brandy from a former distillery—in 2010. It costs $150 per bottle, and once it’s sold out, it’s gone as sure as it was from my glass…es.

As always, this WBC pre-excursion was a highlight of last year’s conference. It’s impossible to get such bang for your buck elsewhere, and that’s because of the great sponsors that the WBC manages to pull in, such at the Treasury Wine Estates. 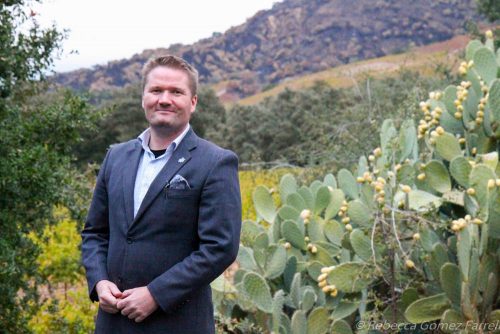 Robert Ord, TWE’s Prestige Manager, posing for me outside of Stags’ Leap

The experience is one I’ll always remember, as it was only my second time tasting wine in the Napa Valley. I’m quite confident that sticking with the Treasury Wine Estates’ portfolio for future visits won’t lead me astray. How could it with views like this? 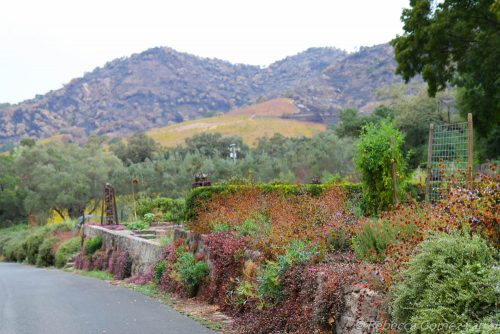