Wined and Dined by St. Amant at the 2016 Wine Bloggers Conference

Six months have passed since last year’s Wine Bloggers Conference in Lodi, but I’ve been wanting to write about one more experience from it ever since – the Wine Blogger Awards Banquet. 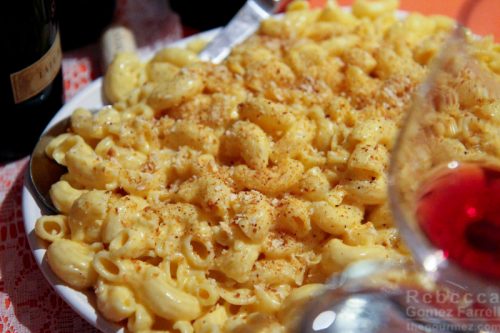 It’s not the cheesy emceeing of Alan Kropf I want to highlight, though that cracked me up quite a bit. Nor was it the traditional Southern dinner served up by South restaurant, though I’ll be talking about their dishes as well. What I’ve wanted to write about is a new twist added to the banquet — getting to spend the evening with a representative from one of the featured region’s wineries. At my table, we feasted with Barbara Spencer, who has owned several vineyards and the St. Amant Winery with her husband, Tim, since the 1970s. Their son, Stuart, has been the family’s winemaker since his father passed away in 2006, and Barbara has been the backbone of their venture for many decades. Indeed, the winery takes its name from her maiden one. 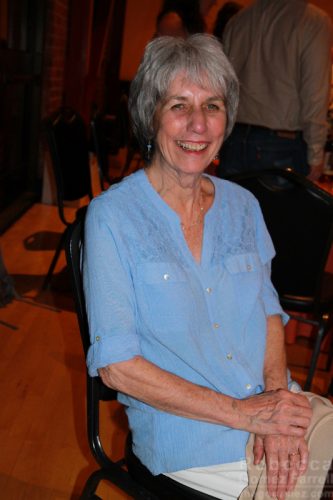 Having each table at the Wine Blogger Awards dinner hosted by a representative from a different Lodi winery was a stroke of genius. How nice to sit down after a weekend of go-going and hear the personal stories behind the wines we were about to enjoy, with each table getting a different selection! It was from Barbara that I learned about the exciting Lodi Natives project, of which St. Amant is a participant. 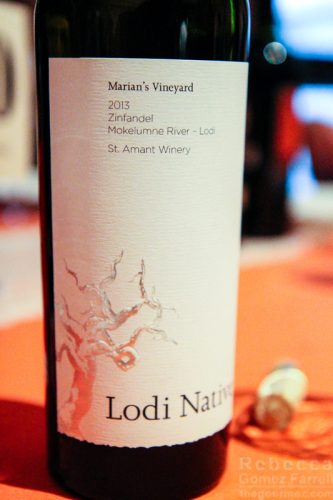 Each Lodi Native winery pledges to make an old vine zinfandel from one of their vineyards, using the same techniques as the others. The idea is that the character of each vineyard will be highlighted, and boy does that hold true! St. Amant’s 2013 Marian’s Vineyard Lodi Native reminded me of cherry cordial with a similar creaminess and viscosity to those of the milk-chocolate candies.

However, tasting it side by side with the St. Amant 2014 Old Vine Zinfandel is when my palate really took notice. 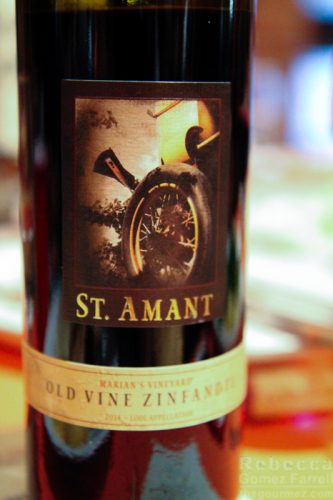 Wow, does the winemaker make a difference in terms of the final product! Yes, the vintage was also different, but the St. Amant house style yielded a much more complex product with cranberry, dark chocolate, and musky berry notes. I was inspired enough to do some research to better describe what that musky berry note might most resemble: jostaberry is my best guess, though I’ve never tried or seen one of them in person.

But the zinfandels weren’t the only way I was wowed. 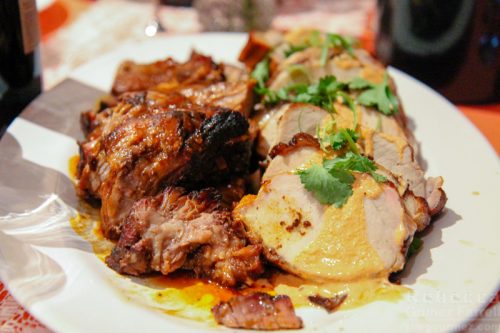 Leave it to brisket to do some more of that! The pork on the right is less notable as it was much too dry, but the brisket on the left was plenty flavorful and memorable. Sure, people were also salivating over mashed potatoes swimming in butter and the mac and cheese pictured above, but the most exciting side for me was the simplest of all: roast baby carrots. 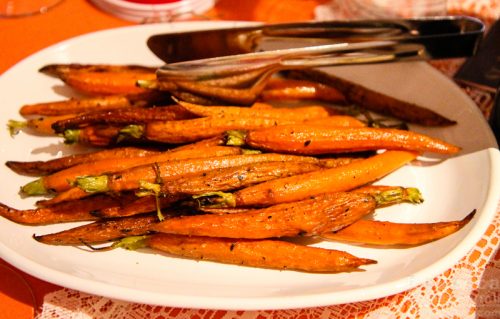 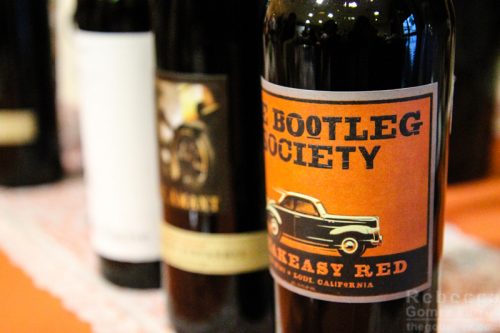 As their website reads, “The wine is for those that love great wine without the pretense,” and I can’t think of a better pairing for it than carrots roasted with just enough char to accent. The wine offered rich, red berries in full candy, jammy form with a secret treat of roasted ancho chile held to the finish.

The opening kale Caesar salad was…less impressive. A brief sauté of the greens would have done much to make it more appetizing. 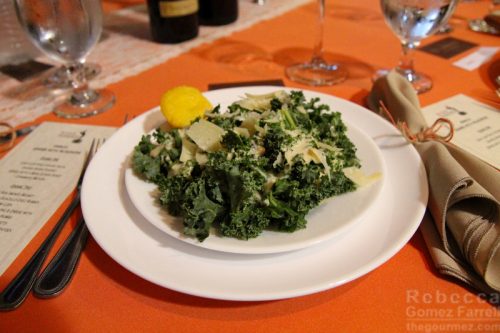 But I mention it here because of how well the Grana Padano shavings paired with the St. Amant 2013 Barbara Rosé, a wine I sampled at the opening reception of the Wine Bloggers Conference as well. 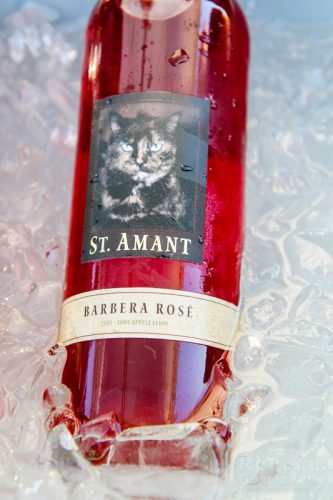 It’s a crowd-pleasing rosé with a nose of green strawberries and a wafer cookie vanilla throughout. But the St. Amant wine that stole my heart more than the cat that adorns several of their labels was the Cat’s Meow 2006 Late Harvest Barbera. 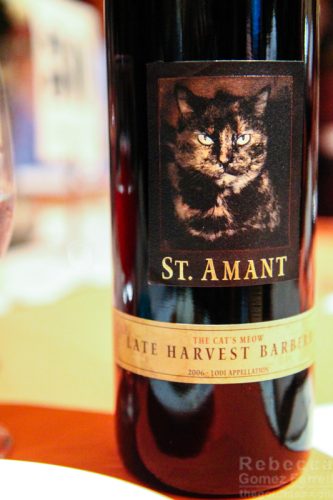 Barbara shared that the wine was first made by accident….and what a happy accident it was! They’ve made it ever since. Paired with the highlight of the meal, a roasted peach and red currant tart topped with whipped Chantilly cream, it soared. 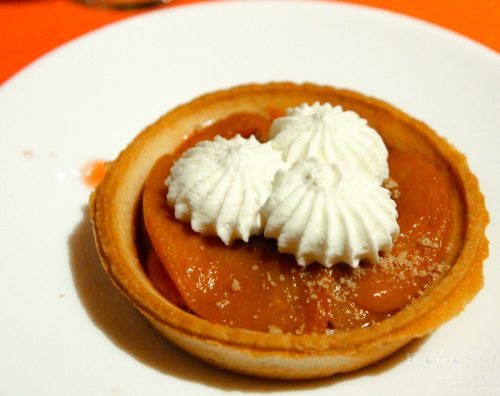 The dessert’s sweetness brought out the barbera’s spicy side by contrast, and the summery roasted peach and Chantilly cream amplified the light-bodied properties of the dessert wine. I loved that the dessert needed only a hint of cinnamon to shine; that’s all the chefs used on it by way of a dusting of brown-sugar crumbles.

What a truly sweet end to an evening with Barbara Spencer of St. Amant Winery! I can only hope we are treated to a similar experience at the Wine Awards Banquet in Napa next fall, though I will also hope for enough noise level control to converse with the winery’s representatives more easily. Regardless, more tasting of St. Amant’s wines is definitely in my future…especially as I didn’t realize Portuguese grapes are their specialty until writing this post! Barbara was apparently holding out on us. 😉

One thought on : Wined and Dined by St. Amant at the 2016 Wine Bloggers Conference