Cityscape at the Union Square Hilton

Obligatory disclaimer: This write-up is based on a media event previewing Cityscape’s space, food, and drinks for free.

Hotels may appear off limits to pedestrians passing by, but often, they harbor secret niches the public can access if they know where to go. Such is the case at the newly opened Cityscape, a sleek bar at the top of San Francisco’s Union Square Hilton (333 O’Farrell Street). 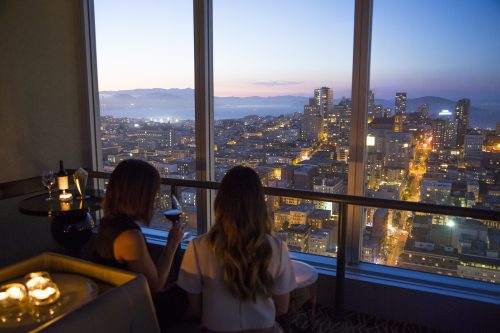 Head into the corridor behind the Hilton’s lobby and up to the 46th floor to find the bar. Near sunset is the optimum time; no matter how good the food and cocktails are, which I’ll get to in a minute, the reason you’re coming here is the view. Unfortunately, on the evening I visited, San Francisco’s fog staked its claim, but as you can tell from these pics provided by the hotel, it’s absolutely gorgeous on clear days. 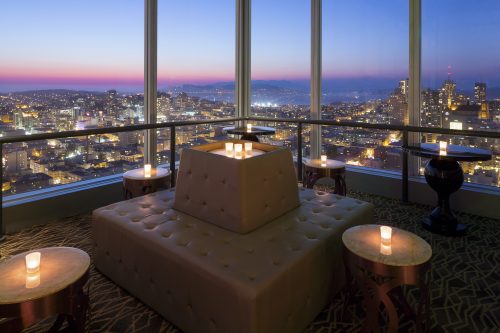 And to be honest, I thought the city lights coming through the fog that night were pretty cool, too. 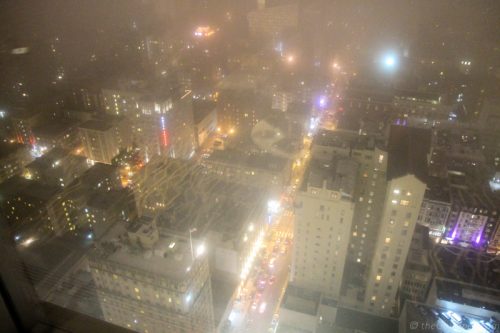 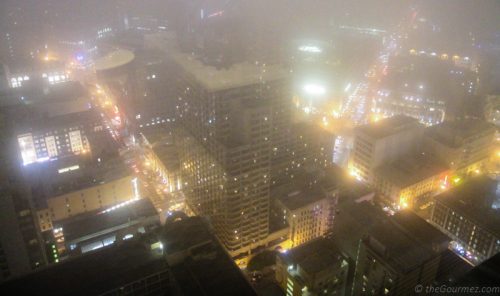 Or maybe that’s just the horror writer in me loving the spookiness. The bar itself isn’t spooky at all; it’s a giant square of comfy, modernist furniture in a palette of grey and beige. 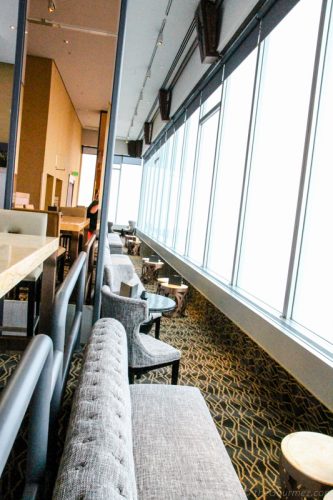 They all face the limitless windows and that amazing view. A central bar lights up more confidently in pink as the night falls. 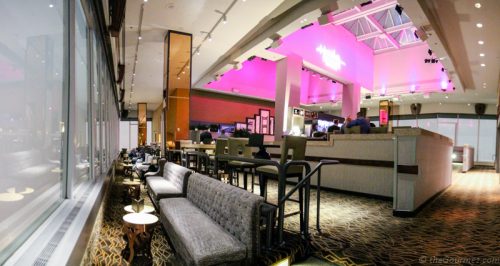 Cityscape’s cocktail list will quickly confirm that you’re paying for the view as much as the alcohol, but together, they are worth the splurge ($16-$20). The Berkeley Bramble was as vibrant as the sunset should be, boasting a bold blackberry hue that belied the soft gin, lemon, and club soda mixture. 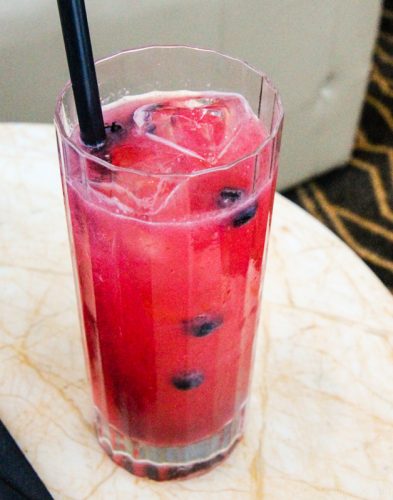 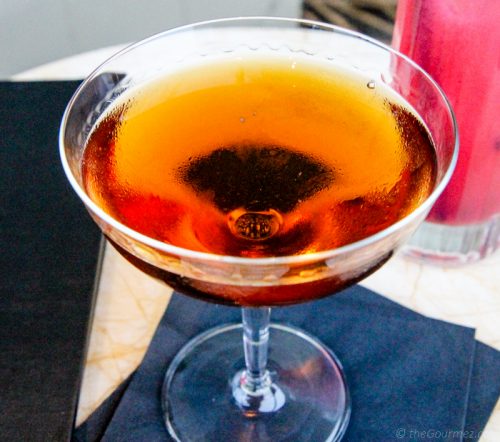 We also enjoyed a couple glasses of “the Mariner” red wine blend from Dry Creek Vineyards. The best deal on drinks at Cityscape may be selecting the glass and a half size of whatever wine you prefer.

Chef Michael Vaughn, who signed on with this Hilton this past July, asked for the drink list before crafting the menu of bar bites. As the kitchen is over forty floors away, he knew that cold plates would be the focus so no quality would be sacrificed in the course of delivery. 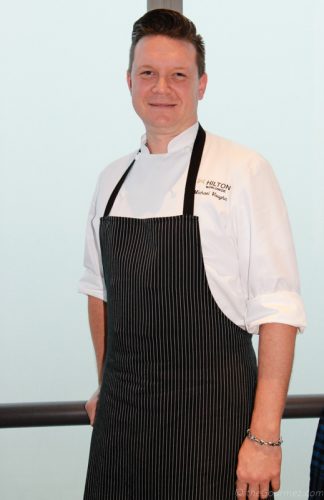 Vaughn loves playing with how the same drink changes when paired with different foods, and he’s really passionate about the Cityscape space and the Hilton’s new Urban Tavern, what Vaughn described as a fresh take on a gastropub, focusing on healthier dishes with whimsy.

The bar bites also fit that bill, though they provide more of an adventurous dip into Asian-inspired dishes. 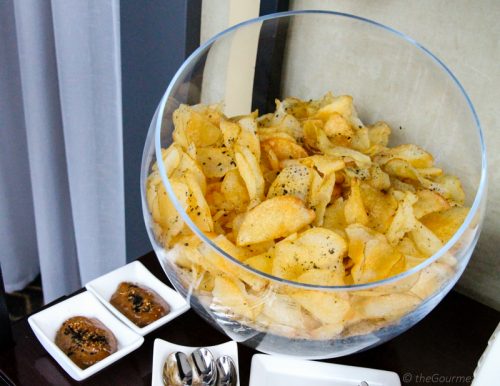 Potato chips are served with nori salt and an amazing black garlic and charred scallion aioli that was so earthy and rich, I nearly thought it pâté. Vaugh loved my enthusiasm as black garlic is apparently a hard sell. It’s so very good, though, worth every second of the week-long roasting process. 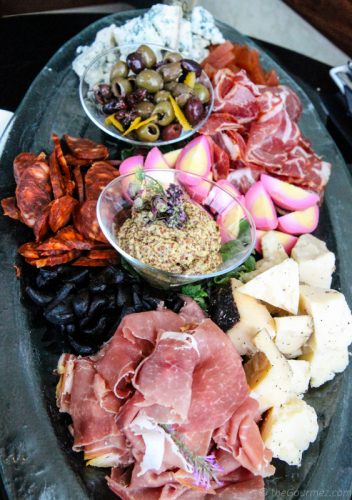 The charcuterie is top notch and arranged with finesse. What stood out most on that platter, however, were the beet-pickled eggs with tons of color. I don’t know if any tea was involved in the process of imbuing the eggs with delicious flavor, but the image conjured of tea eggs is apt. 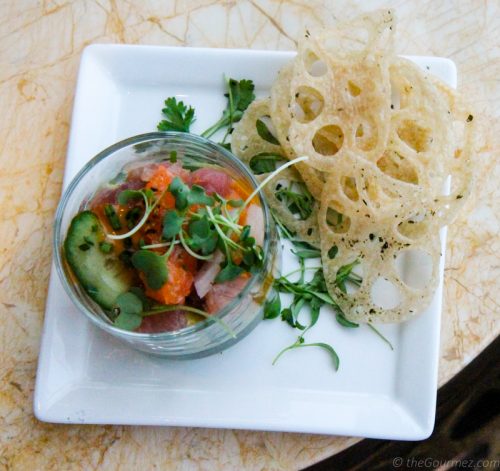 —inching out the chilled prawns— 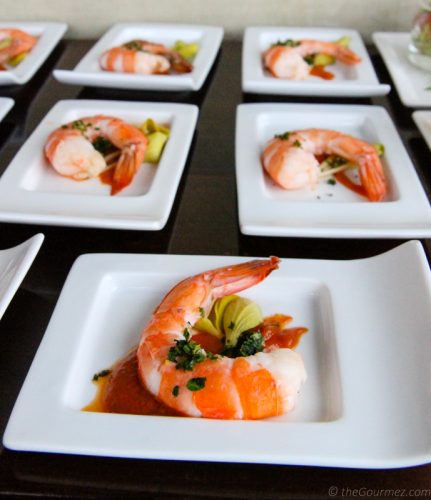 —in lasting memorability just a bit. Spiced cucumbers with sesame, chile, scallion, and a fleeting impression of burnt peanuts also pleased. Small plates range from $7 to $17. Add that together with a drink, and yes, it’s a pricy evening, but I can’t imagine a much nicer way to enjoy a repast before heading to a nearby show. Extravagance worth the cost, but make sure to get your money’s worth of that view before heading back down to floor level and reality. 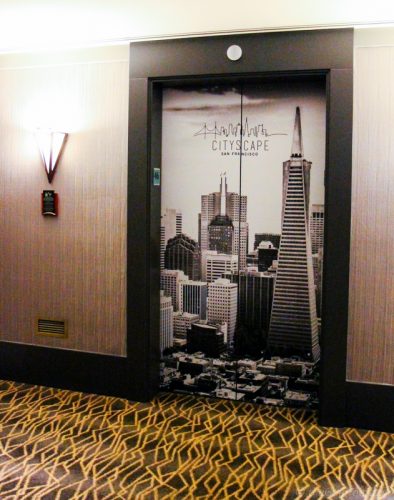 Cityscape is waiting to provide you with more than a moment of tranquility.

4 thoughts on : Cityscape at the Union Square Hilton