Indian Summer Cocktails and Bar Bites at the Clift Hotel 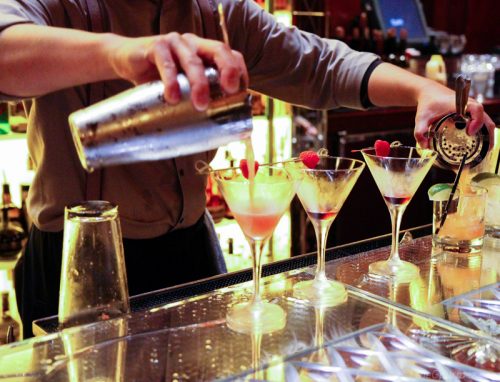 Obligatory disclaimer: The cocktails and food mentioned in this post were complimentary as part of a special media event.

It’s September in the Bay Area, and we all know what that means – Indian Summer! It’s been one of the coldest actual summers on record here, which means the annual warmth of September and October will be welcome — though we’ll never refuse a little rain. As a Californian, I’m obligated to include that last part.

The Clift Hotel: A Modern Classic Setting for Style and Sipping 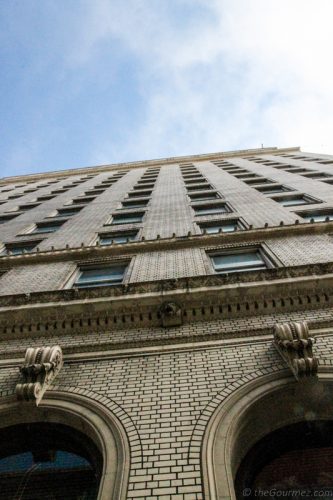 Looking up at the Clift Hotel.

There wasn’t a drop in sight the day I tried the Indian Summer cocktail and bar menu at the iconic Redwood Room in the Clift Hotel (495 Geary St., Union Square, SF). What makes it iconic? How about being paneled from a single redwood tree? Is that iconic enough for you? 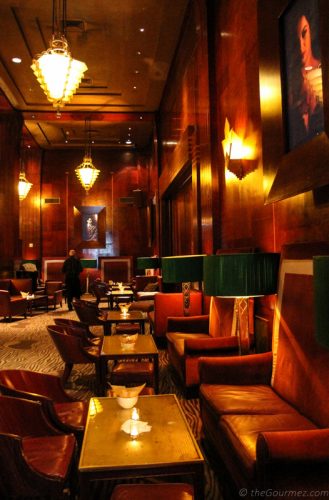 The whole hotel is quite historic, which anyone who’s lived in the Bay Area awhile probably already knows. Commissioned in 1913, it has hosted a slew of celebrities and was the first earthquake-proof hotel of its time. The modern classic style it currently boasts is the result of a remodel once the Morgans Hotel Group, a firm specializing in big city boutique offerings, took it over in the mid-1990s. I knew from the moment I walked through the lavender-lighted entryway that this was no ordinary hotel. It’s more of an adult wonderland! 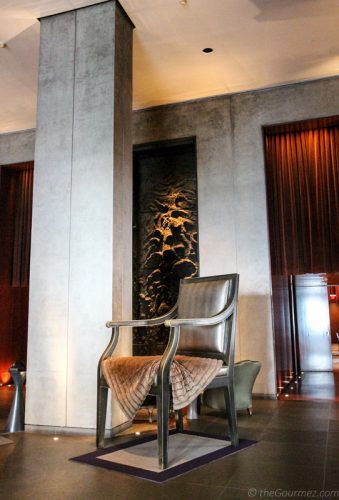 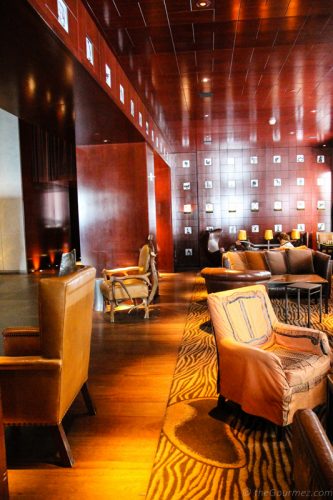 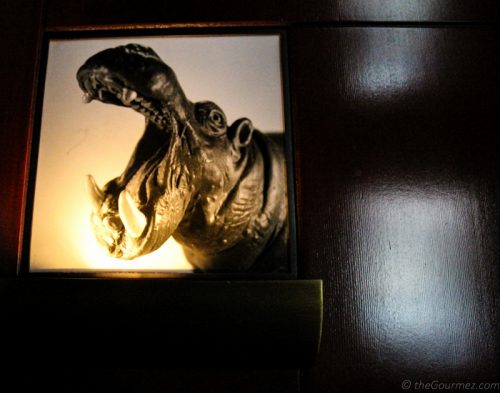 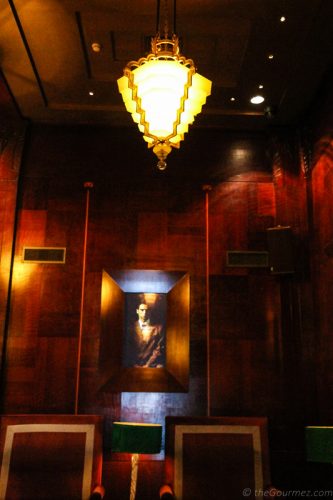 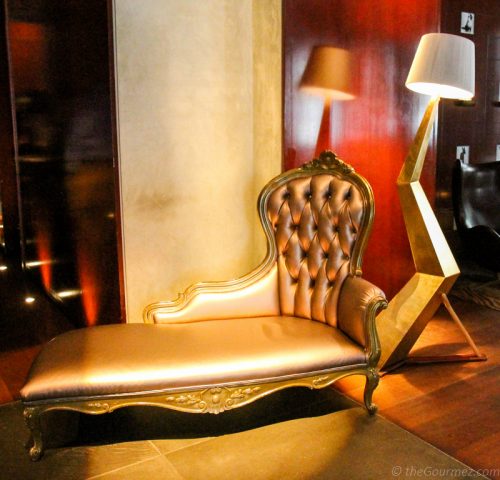 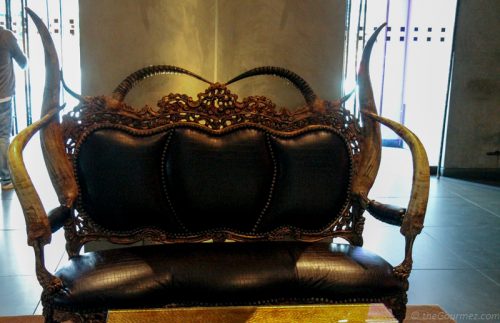 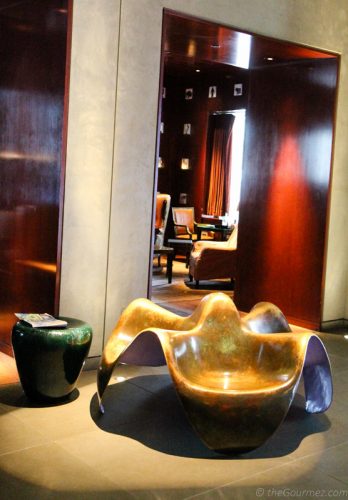 Pay close attention to the lamps if you visit; a few of them are Salvador Dali originals! The giant, focal chair is, of course, a highlight of the lobby, drawing plenty of playful pictures. If you stick your head underneath it, you’ll find a surprise as well— 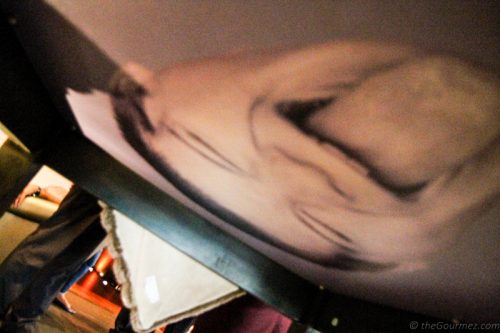 How fun! But I was talking about cocktails, wasn’t I? 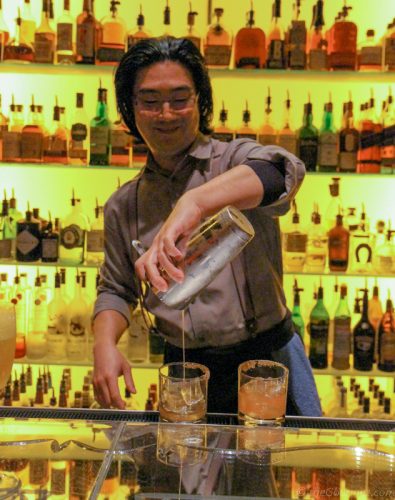 Anthony Kim at the bar.

Anthony Kim, the Redwood Room’s head mixologist, has come up with a great menu of cocktails inspired by classics but jazzed up with his own spin. Combined with Chef Thomas Weibull’s inventive bar bites, they make for a great beginning or end to a night out in Union Square. Note: I’m using the Clift Hotel’s images for most of these pictures, as believe me, you want to see these in their full glory rather than the dimly lit versions I ended up taking. 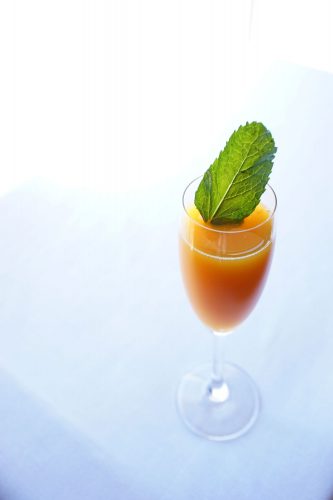 The Cool Desire was my definitive favorite. It’s essentially a mimosa and should please lovers of that brunch standard though the Cool Desire is more sophisticated for the evening crowd. Passion fruit subs in for orange, and Kim added a light touch of mint syrup for herbal complexity. Topped off with Veuve Clicquot, it’s a great pairing with the tuna poke tacos. 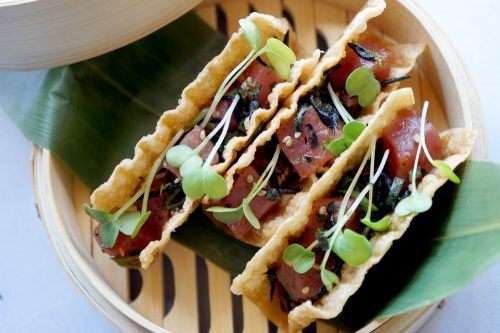 Those are a delightful fusion, using wonton shells in place of tortilla, which I’ve also seen at the Albany Taproom recently. Messy, certainly, but what taco isn’t? I would have preferred the poke enhanced with a citrus vinegar, but with a Cool Desire in hand, that effect is already achieved. 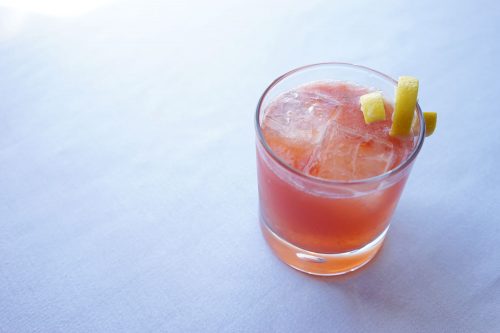 The King’s Lemonade is an approachable rye drink for those not yet convinced they can handle whiskey-heavy cocktails. Made with Woodford Reserve, it offers lots of fresh produce appeal with strawberry puree and basil syrup. Try it with the compressed watermelon salad. 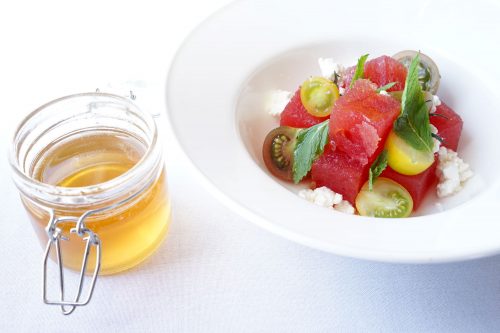 This dish uses honey from the Clift’s rooftop hive. The presentation is lovely, and it’s a simple, lightly sweet dish that will benefit from the King’s Lemonade’s layers. 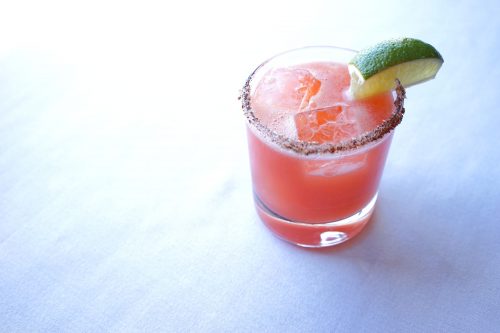 The Sandia Amara’s chili and salt rim is the cocktail’s standout element. This one’s heavy on the tequila, to the point that I’d appreciate more of that watermelon puree giving it color. Traditional fruit sprinkled with chile, so common in Latin American cuisines, inspired Kim. The tequila makes it a great partner for the earthiness of my favorite dish on the menu: mushroom spring rolls with truffle aioli. 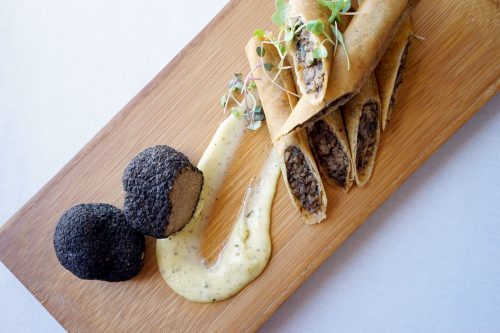 Here’s the thing – I dislike mushrooms, often passionately. My rating system even uses them to denote my lowest score. But in this offering, they are expertly prepared, exuding the woodsy atmosphere that so often gets lost when simply thrown into a dish. The shell’s fried, paper-thin crunch completes a wonderful bite.

Dessert is also an excellent choice at the Redwood Room. 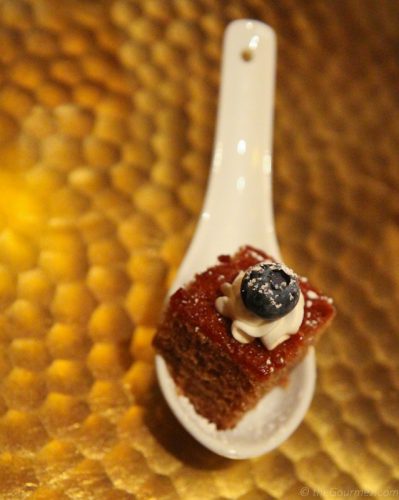 The honey cake, sourced from the rooftop again, is surprisingly more of a spice cake – the honey seemed to mostly come into play by soaking the bottom of the cake in it. We were only served bites – I’m sure the actual portion is much more substantial, and it would make for a playful combination with the creamy Clift Painkiller. 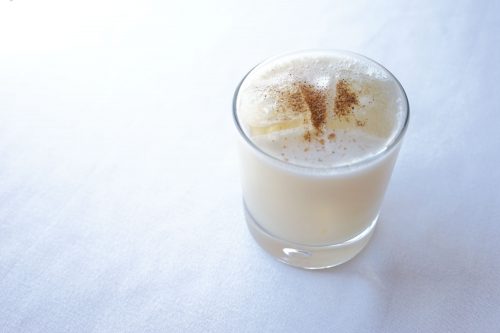 This is a dessert cocktail all the way. Kim dialed back on the OJ presence to bring in more of a pineapple focus. That pineapple chases the coconut cream around the glass. I’d liken it to a pina colada served on the rocks rather than blended. A restrained use of nutmeg grated on top is appreciated.

While not strictly for dessert, the Raspberry Sour provides a fun contrast to the salted caramel cheesecake. 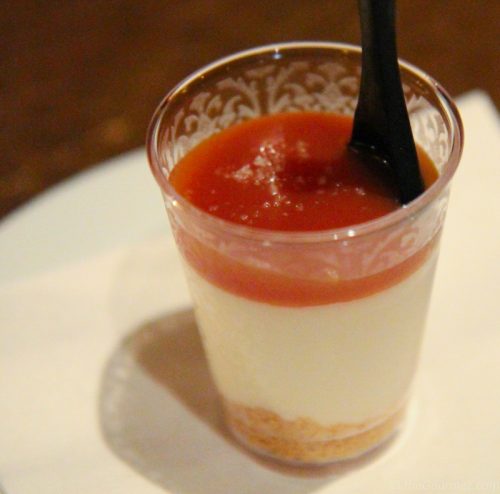 Served to us in a cup, that cheesecake impressed! Because it’s so omnipresent on dessert menus, impressive cheesecake is hard to find, but I assure you this is one, with a perfect proportion of topping to filling and one of the tastiest fillings I’ve had in some time, to boot. 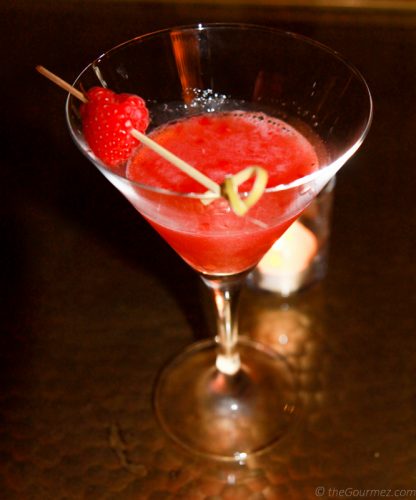 Place the emphasis on sour for the cocktail, as looks here are deceiving. Raspberry pulp provides texture and a float of Chambord brings flavor, but lime juice mixing with the Absolute Elyx vodka is the strongest element – it’ll bring out whatever lemon is used in that cheesecake base. Ginger syrup elevates all the cocktail’s ingredients, making for an intriguing drink.

Whatever your choice, the Redwood Room’s Indian Summer menu has plenty hiding inside it to whet or sate your palate. Just step on in through its alluring doors… 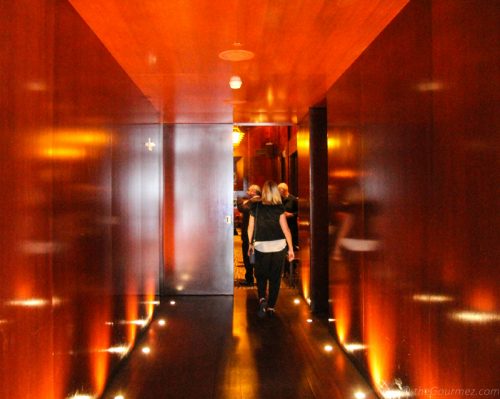 Entering the Redwood Room through the lobby.

One thought on : Indian Summer Cocktails and Bar Bites at the Clift Hotel