Last year, the Indie Coffee Passport came to the East Bay, and I had tons of fun using it for months to try out new-to-me coffee shops in the area. A few are now on my regular rotation of work cafes, including Marana Cafe, Alchemy Collective Cafe, and eko Coffee Bar. 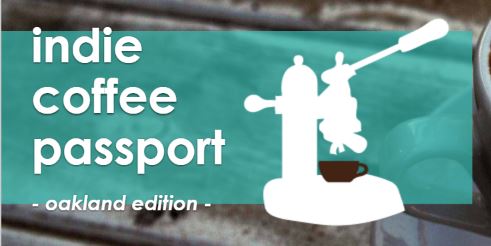 As of early August, it’s back!  And it’s honed in on Oakland this year, which comes with a cheaper price tag. That seems like a smart move!

What is the Indie Coffee Passport?

In short, it’s a fold-up card that fits in your wallet that you use to purchase a free drink from each of the participating cafes — and at least one non-coffee drink is offered at each locale. I’m borrowing from ICP’s Instagram feed to show you an example:

Oakland’s version is $13, which comes to just under $15 with tax + S&H. Flashing it entitles you to one free drink from a menu each cafe sets of 4 to 6 options. Eleven cafes are participating this year. What are they? On the ICP Oakland website, there is a map showing each cafe’s location and a thorough list with contact info, the drink menus, and website links. Here’s a briefer list:

I’ve been to four of those cafes before, and they are all ones I would happily go back to. Getting a drink for the equivalent of $1.36 when I visit is really a no-brainer, especially when they can run up and over $5 easily these days. I can’t wait to try the other options — I’ve been meaning to hit up Red Bay Coffee since they opened their shipping container stand this last spring!

How Long Does it Last?

The Indie Coffee Passport does have a time limit, but I think 7 months is very generous! Of course, we’re already a month into that, but I’m quite confident I’ll be in the need of 11 coffee drinks by the end of February, so…

Where do I Buy It?

From the website! I just made my purchase, and I’m expecting it to arrive by mail within a week. Easy peasy, and I hope this becomes an annual tradition in Oakland and/or other parts of the East Bay.

Who Puts Indie Coffee Passport Together?

Indie Coffee Passport is a service run in several U.S. and Canadian cities to promote getting people out to experience the locally owned coffee shops in their area. Started in Toronto, the brand has branched out and is run by a sponsor in each city where it launches.

For Oakland, that sponsor is Marc and Mari Callado of Shift Local! Marc and Mari are the power couple of generating support for small businesses in Oakland, where they’ve organized tons of unique and engaging methods of getting the community invested in its local shops, including flash cash mobs to spend money en masse at local retailers, contests highlighting spots that make an ideal date night, and most recently,  a “Braunch” party to promote the Indie Coffee Passport’s 2016 launch while raising funds for Dreamcatcher, an Alameda Family Services program for at-risk youth. I don’t know about you, but I trust what these two are selling me in terms of community investment…and that’s a big reason I’ve been supporting Indie Coffee Passport the last two years.

Well, that, and how great of a deal it is! Get yours now. And I’ll get back to discovering where Indie Coffee Passport will lead me next, like it did to Catahoula’s Kaffeegarten on 4th last year…

Last few days for the #EastBay @indiecoffeepassport ! Using mine to score a zambrano and a Hawaiian mochi. #Coffee

One thought on : Indie Coffee Passport – Oakland! Get it now!