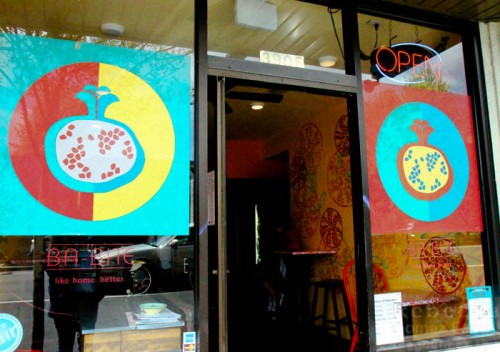 Ba-Bite is an order at the counter, casual restaurant specializing in Middle Eastern comfort food. The name is a play on the Hebrew word babait, which evokes home cooking. Mica Talmor, the executive chef and co-owner of Ba-Bite and Savoy Events catering company along with her husband Robert Gott, is an Isreali-Jewish woman and most of Ba-Bites’ employees are Jordanian. They should know what Middle Eastern comfort food should taste like!

The whimsical pomegranate décor is both appropriate for the cuisine and offers a pleasing color palette — make sure to take in the large, knit pomegranate artwork in the main dining room. 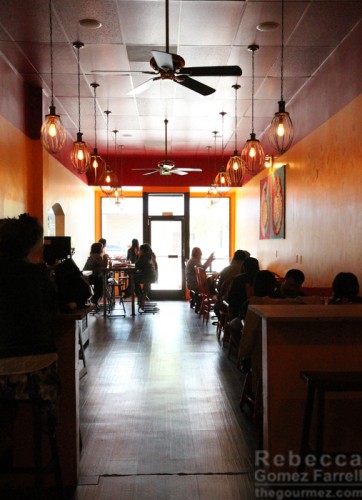 The menu consists of a selection of hummus plates, salads, wraps, and entrees ranging from chicken tagines to eggplant magadera. Shakshuka eggs will be a must for me on a future visit!

The salads, which are a main draw, come mezza, meaning small portions ($5), or composed ($9), meaning the small portions come on top of a bed of various greens and cheeses. Add-ons include shisk kabobs, saffron lemon shrimp, lamb shashlik, and several other options. We stuck with two mezza salads, although the best deal would be 3 for $15. But combined with our hummus plate, I’m not sure we could have eaten much else! 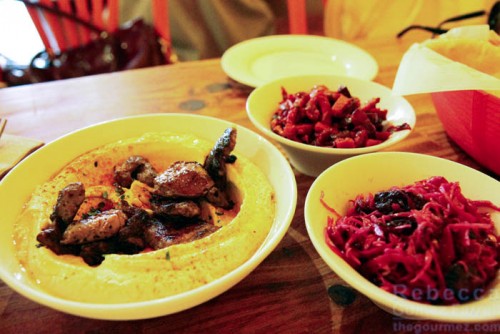 The beet salad, pictured at the back, was my favorite. Made of roasted beets and yams tossed with cilantro, walnuts, and a mild North African spice blend in a citrus vinaigrette, it offered a fresh, tasty, combination of textures and flavors. The red cabbage and mission fig salad, with mung bean sprouts and a red wine vinaigrette, tasted too pickled for my liking. The dried fig offered only a chewy contrast to the greens’ flimsier presences — for me, that’s a waste of a fig. Perhaps my love for them interferes with my objectivity?

Also in that picture is the classic hummus plate topped with lamb. All of the hummus plates are garbanzo beans pureed with olive oil and pine nuts, though one choice adds in whole garbanzo beans and another does a fava bean puree. Get the extra pita bread for $2 more — you’ll need it with that much hummus! The pita, which comes from a local baker, was partially warmed and pretty good, though I’ve had better. The hummus was high-quality, and the lamb was probably the best item we sampled; moist and rubbed with a palatable mélange of herbs. The accompanying pickles and olives were tasty, if not very memorable. Isn’t most comfort food about the same, though? 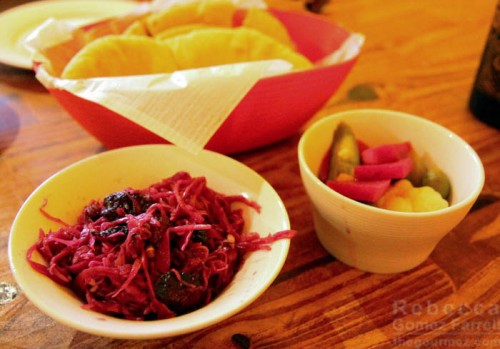 Pickles on the right.

We also ordered the mint tea and the spiced coffee. My friend thought a sprig of mint to decorate her tea would have been nice, but the drinks are self-serve, so that may not be a functional wish. The coffee was great, with spices so smoothly simmered into the brew that it was hard to tell what they were. Perhaps cinnamon and a touch of cardamom?

I think Ba-Bite is achieving exactly what they set out to do: Offer a range of fast and tasty Middle Eastern treats for reasonable prices. At least I think they’re reasonable; I’m beginning to lose my ability to tell living in the Bay Area for a few years now. But I can tell you that Ba-Bite will easily earn another visit from me. I have yet to try their falafel, and those date cookies looked delicious.