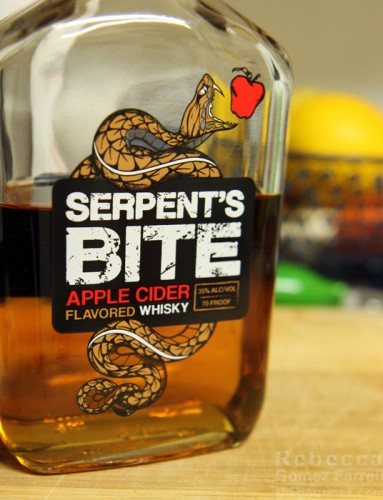 I picked up this bottle when the husband requested whisky but said, “It doesn’t have to be the good stuff.” Being as this was on sale for $14, I figured it would work. And hey, I like apple cider. My family makes excellent hot apple cider all winter long. This makes me infinitely qualified to judge Serpent’s Bite Apple Cider Flavored Whisky.

I knew, of course, that this was not going to be a whisky that changed my life. I figured it would be a novelty, fun to try, and hopefully not taste like pure sugar and chemicals as some flavored spirits do. 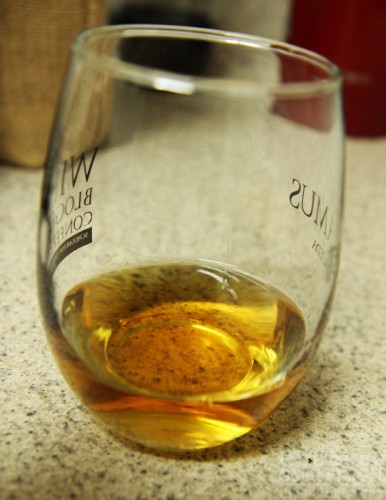 OH MY GOD, IT IS SO SUGARY. First of all, you can smell it from the other side of the kitchen. The apple smell is stronger than an opened sour apple Pucker, though it does avoid any chemical airs. There is no other smell — apple is all that now exists in your world. Buried deep beneath the sugary bliss, the alcohol heat doesn’t tickle until your nose is far in the glass. You shouldn’t stick your nose in a glass when tasting spirits anyhow, so that’s not really a complaint. It’s merely a glimpse of whisky’s ghost trapped in this bottle.

I enjoy honey bourbon, or at least Wild Turkey’s American Honey; the imitators are not as successful. Serpent’s Bite takes flavored whisky to the next level of sugary insanity. I want to say you shouldn’t sip it but honestly….it’s good sipping! It’s basically a cup of extra sweet, chilled apple cider. To be clear, I’m talking about the Christmas time beverage, not the one made by fermenting apples. To be clearer, this drink is not refined in any way nor does it offer anything resembling a whisky flavor profile. Honestly, it most reminds me of sauternes. Yes, this whisky reminds me of French dessert wine. You read that right.

There is a hint of cinnamon on the aftertaste, but I think that’s really the whisky’s last gasp of dignity. No dilution is needed prior to drinking, that’s for sure, but you may need an emergency insulin shot. I can see this working well in the place of rum in fruity, slushy drinks like pina coladas or frozen daiquiris (never a classic daiquiri; I shudder at the thought).

If this were categorized as a liqueur, I’d be more forgiving. But as a spirit, I have to knock it down a rating class. It also gets docked for advertising a bite when it’s really just a harmless bushel of apples. No monsters lurk in its depths, because it has no depths to lurk within.

It starts with clear apple notes on the nose, though fortunately the aroma is far from overblown, with a hint of vanilla backing it up. On the palate, Serpent’s Bite is sweet and cinnamon-laced, with strong apple notes as expected. Aside from a little hit of vanilla-infused caramel, though, what’s ultimately missing here is the whiskey. The whiskey flavor is so mild that this feels like it could be an apple brandy, an apple rum, or a (colored) apple vodka.

That’s not entirely a slight, as Serpent’s Bite is completely harmless and inoffensive in every way — although I’m sure that angry snake on the label will scare off a drinker or two. B-

The aroma is fresh smashed apples and caramel with a whisky backing.  In my mouth the feel is thick.  The sweet apple entry builds to a spiced apple flavored peak.  It fades with caramel taste with a hint of nuttiness, and finishes with a peppery sting, a burn on the back of my throat and some whisky heat.  This is a whisky best served as a shot, or mixed in a cocktail.