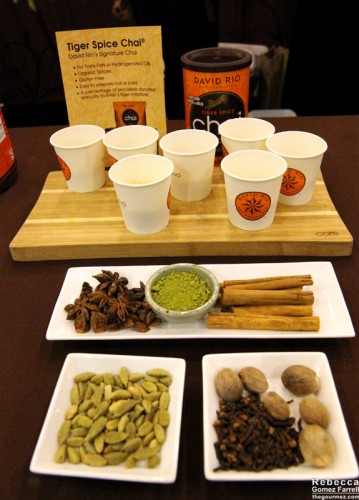 Everything that goes into a David Rio Chai.

You can find fast-paced, ongoing barista competitions in any corner of a Coffee Fest show, but at their heart, these events are trade shows. And I had far more fun than expected discovering up-and-coming products among the many established brands. This isn’t a list featuring my favorite coffee beans from the weekend—that would be expected. Rather, it’s a list of my favorite unexpected finds, all products I hope may be appearing at a coffee shop near me soon. 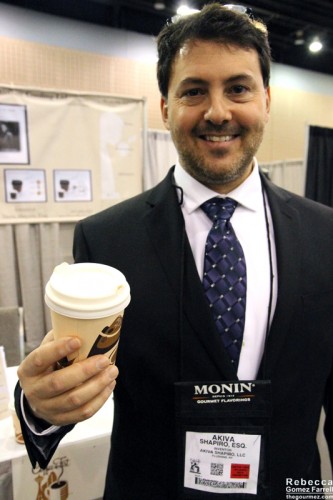 Founder Akiva Shapiro with his prototype.

This lid is designed to deal with a very important problem of coffee consumption: how to cool down coffee with a lid on! I understand that many of you enjoy super-hot coffee, but I prefer mine only a few notches above lukewarm. And while taking off a lid does create a beautiful steam show, it’s not very convenient in many circumstances, especially if the liquid threatens to spill over.

Apparently I’m not alone in that concern, because Akiva Shapiro has invented the Airflow Cooling Lid to solve the problem! With its double-hole design, you can blow through one end to cool down your coffee, and hot air will exit out of the back hole. 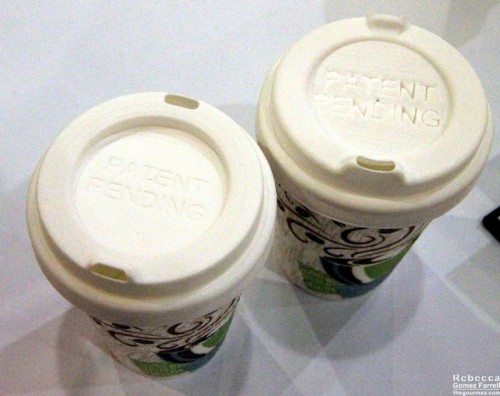 Up-close with the Airflow Cooling Lid.

This product is still in the prototype stage and seeking investors, so I avidly await the day it’ll be mass-produced. 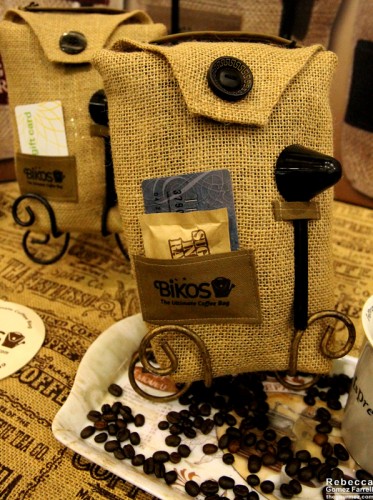 I love this cute gift-giving idea! Founder Traci Gross Shuster came up with it one day after a horrid combination of missing coffee scoop and exploding coffee bag. Why not keep those bags in a beautiful burlap pouch with an attached scoop, she thought. So she made it happen and even designed a slot to hold sweeteners. It’s already made my kitchen counter a prettier place to be without the ugly tin I had out before.

Another plus for the literary types: Bikos Coffee Bags are customizable, and there are currently five different button designs available, each named after a character from a Great American Novel, except for the Maya which is named after the Great American Poet, Maya Angelou.

Now we can gift a bag of a coffee and an adorable way to store it at the same time!

If you haven’t heard of green coffee drinks yet, you will soon enough. There were a handful at Coffee Fest Atlanta, and my favorite of the bunch was absolutely Tropics Refreshers. 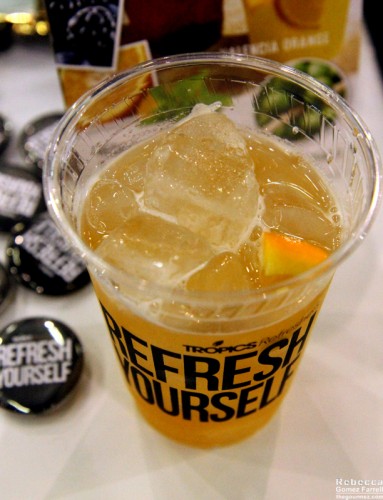 Through green coffee bean extracts, we get a small boost of caffeine and none of the coffee flavor, which is heightened during the roasting process. Thus, drinks made with green coffee beans have endless potential in mixing with other flavors because you’re not likely to taste coffee at all.

Tropics Refreshers’s Valenica Orange had the best taste of the drinks I sampled made with green coffee beans. It also stays relatively low calorie through a combination of pure cane sugar and Stevia. If you’re a regular reader, you’ll already know that Stevia is the only sugar substitute I like, so that automatically gets my approval. The other currently available flavor is Wildberry Mint. 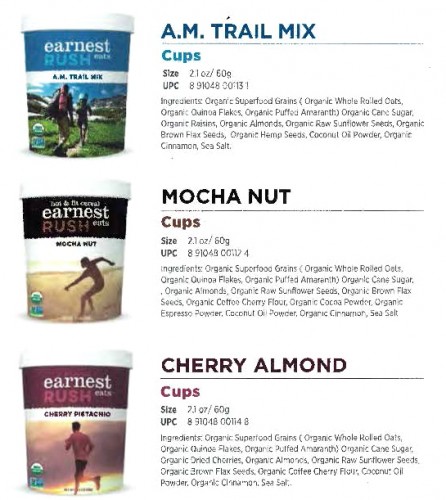 I’ve seen coffee cherries pop up a lot lately on upscale restaurant menus as they can provide subtle complexity to desserts and sauces. Products like Rush Hot Cereals provide a new means of revenue for coffee farmers who used to dispose of the cherries that surround coffee beans. Earnest Eats, through fair trade means, acquires the cherries and uses them to produce these cereals. That results in an antioxidant-heavy final product, which is as great of news as its flavor. From my sample of the Mocha Nut, I’d say the earthy, slightly sweet presence of the cherries was both easily detectable and very, very appealing.

I didn’t have a full cup of the Rush Hot Cereals to try, but I did have their Hot & Fit Asia Blend, and I was so impressed by the quality, I had to tweet about it immediately.

Not my most descriptive review, but a heartfelt “great” it was! And Milkadamia’s wonderful macadamia milk deserves an honorable mention, as I’m pretty sure I made it my mission to make sure as many other Coffee Fest attendees tried it as possible. I may be overly fond of nut milks.

Of course, Coffee Fest Atlanta offered plenty traditional vendors of coffee beans, tea leaves, and chai and blended beverages mixes as well as those new products. Here are a couple photos of my favorites from among those: 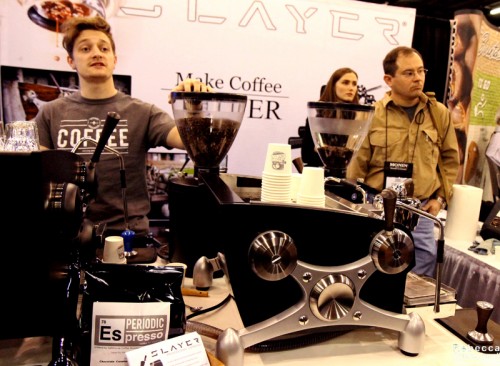 Periodic Espresso being served up at the Slayer espresso machine booth. 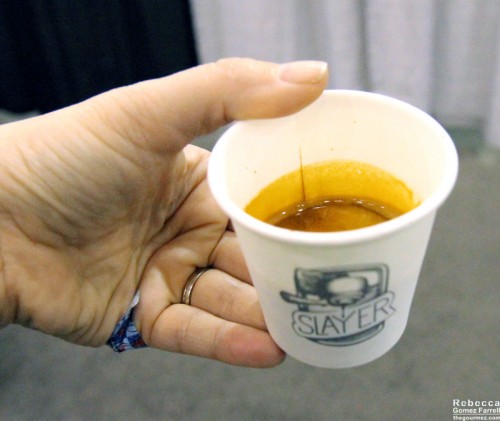 Glub, glub, a beautiful shot from the Slayer. 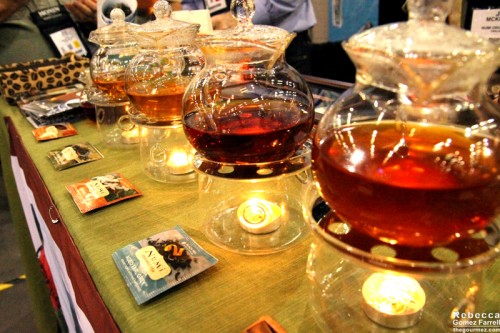 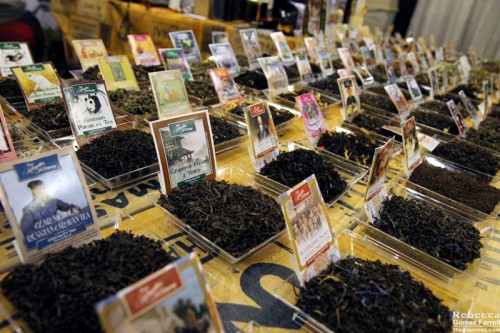 The Metropolitan Tea’s Collection and… 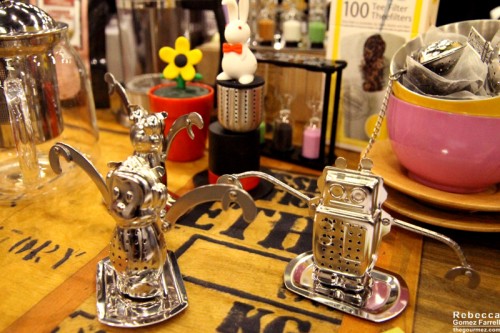 I was heartened to find that the lion’s share of vendors ensure their global partners provide living wages and encourage sustainable practices at the coffee plantations. If you’d like to see more of what the vendors at Coffee Fest Atlanta had to offer, then head right here for my album full of them.