Breakfast Highlights of the Eixample

This is the first of several posts I’m planning on our Barcelona trip last month. The city was amazing in many ways and just what we needed to recharge for 2015. I thought bookending the series with posts on the best of our Barcelona dining experiences might be a tasty call. Agreed?

So let’s start with the Eixample, the only region of the city center that was planned in advance. Eixample is Catalan for expansion. The grid of streets is simple to navigate, and each intersection is bordered by buildings looking in on the action. 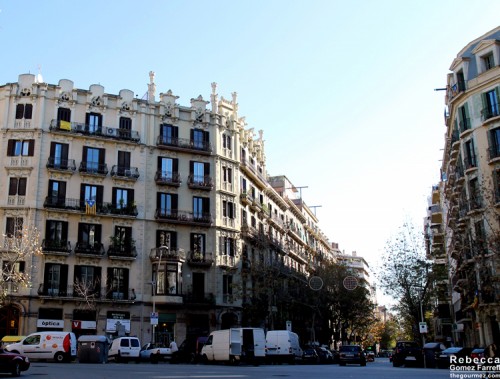 I loved that set-up, though it does make for longer blocks than you might think. The Eixample is also home to most of the city’s famous buildings designed by the Modernist architect Antonin Gaudi and his compatriots. This beauty, la Pedrera, was two blocks from our hotel and the first site that caught my eye as we dragged our suitcases up Passeig de Gracia from the Placa de Cataluyna bus stop. 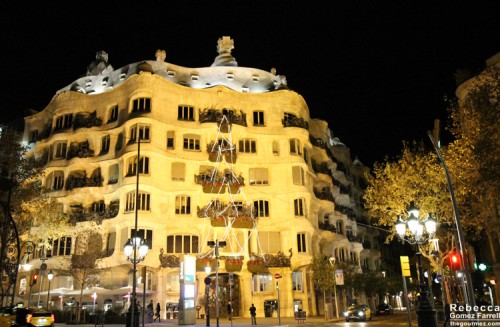 But the food, Becca! You said this was about the food!

Apologies. Sometimes I get carried away with admiration for city planning. I started that tangent mainly to convey just how large the Example is as it essentially surrounds the Gothic Quarter and heads off to the east for a ways as well. Thus, these best breakfasts are separated by great distances! So I’ll note what sightseeing you may want to do nearby, after you’ve stored your energy for the day. Consider them potential starting points for a few days’ worth of adventures, if you’d like. 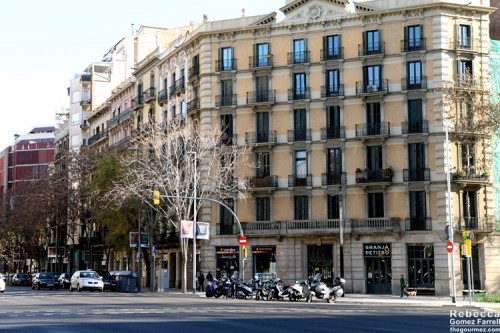 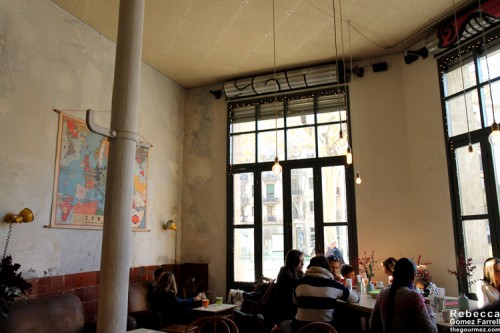 Granja Petitbo was the most crowded place we went to for brunch, and for good reason: their juices are amazing! 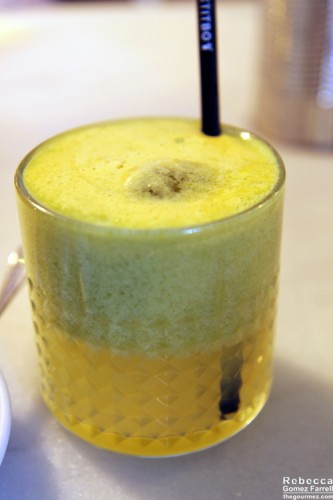 I’ll readily admit that I’ve avoided green juice in the past, but that glass of goodness was the single most refreshing beverage I had throughout our trip. They have a regular list of juice combinations, but this one was a weekly special of pear, ginger, and spinach. And let me tell you, the locals know how good the juices are at Granja Petitbo. We sat at their bar, and the juicer and barista made drinks nonstop the whole time we were there.

Our breakfast selections were also good: eggs benedict and a huevos rancheros variant. The fluffy english muffin used for the benedict is bread I wouldn’t mind getting my hands on regularly. 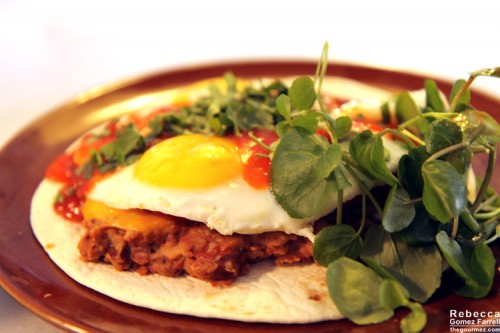 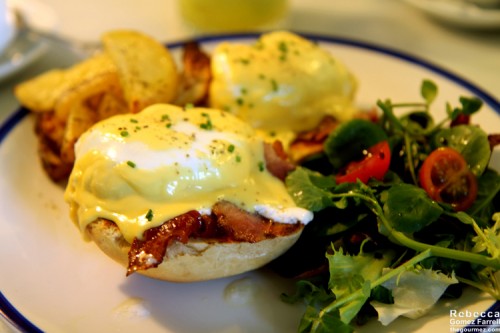 The cappuccino was excellent. I love how Barcelona considers a sprinkle of cocoa, cinnamon, and sugar on top to be standard. 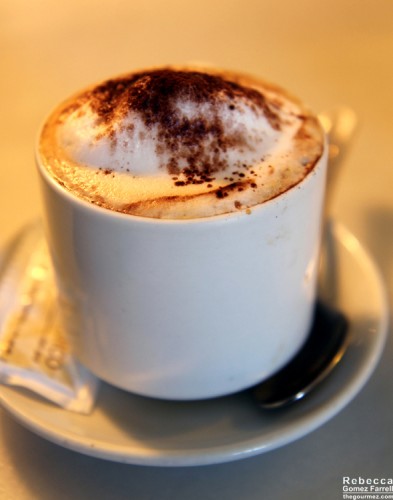 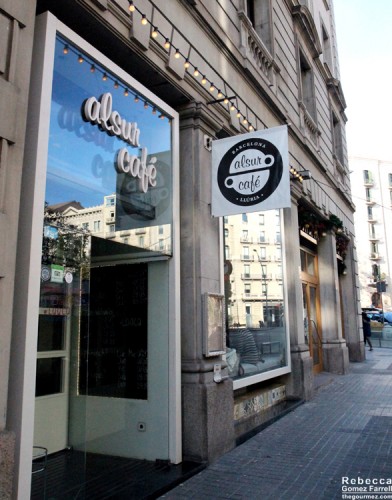 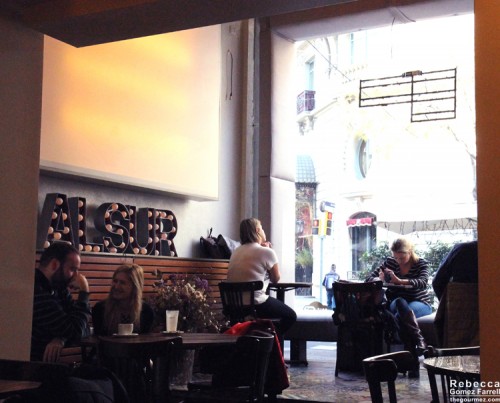 The atmosphere of Alsur Café was delightful, especially the warm light coming in off that grand bay window and the playful sign above the front wooden wall. Equally delightful was their Café Vienna that came with a beautiful separation of layers. 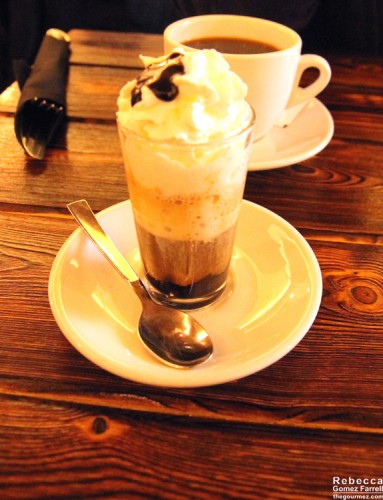 Should you not know, a Café Vienna is a double espresso with whipped cream instead of milk. Or at least it is at Café Alsur. I’ve had nearly as many varieties of a Café Vienna as I’ve heard of for flat whites. 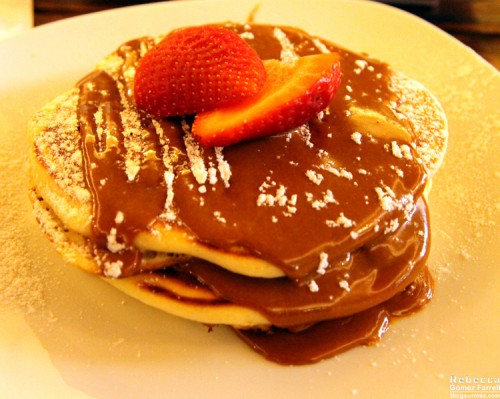 That, the cottage cheese pancakes with dulce de leche, was one dense breakfast. Only order it if you’re ready for indulgence. Without the Husband to eat half, I doubt I could have made it far. As to his scrambled eggs with jamon— 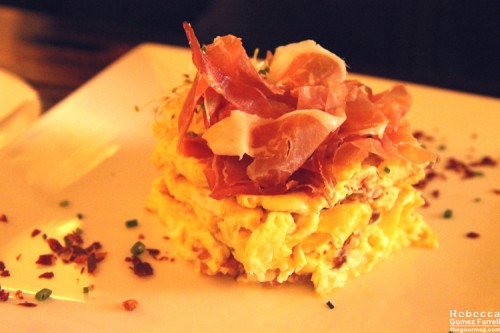 –I don’t care how hungry you are. Order it now! Order it every morning! Rejoice! So fluffy, so infused with flavor. Do yourself the favor of reveling in this savory dish.

Calling my final breakfast recommendation part of the Eixample may be a stretch, but I’m following Yelp’s example. The café’s website declares it to be part of Sant Antoni. It’s tucked right between the Paral-lel and the El Raval neighborhood. 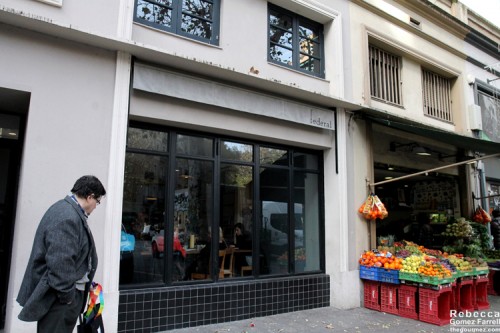 Do not be deterred if the bottom floor looks full; El Raval has two more floors consisting of a whimsical architectural design and a lovely, quiet, rooftop patio. 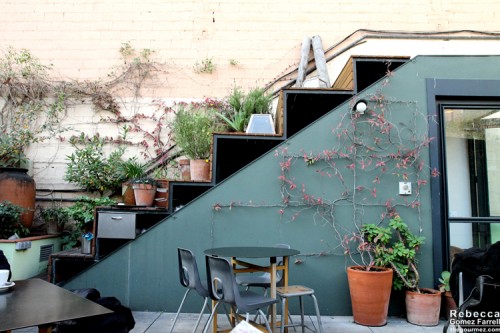 It was the perfect destination to escape the endless, though interesting, city blocks. First, the coffee. 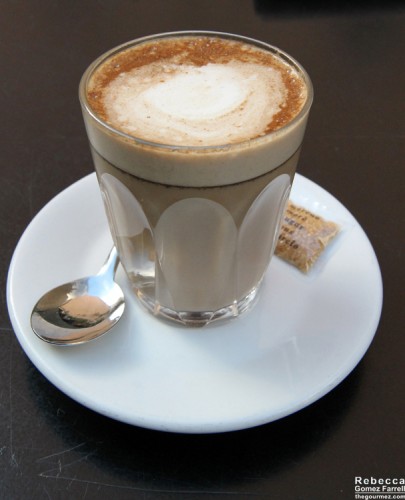 The dandelion latte had just a hint of floral essence, enough to deepen the drink’s complexity but not overwhelm. Once again, the Husband made the better entrée selection, choosing the eggs shaksuka. 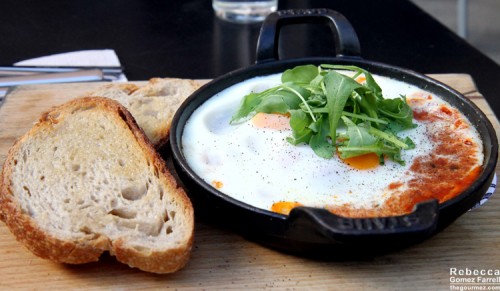 The eggs are baked in a cumin-heavy tomato sauce that is quite delicious. My simple bikini, which is what most of us Americans think of when we think sandwich, just couldn’t compare. 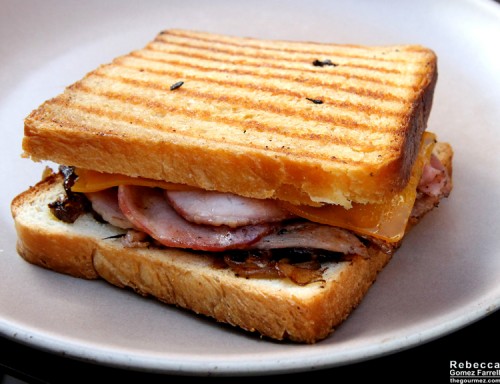 Though if you want a hearty, greasy repast, that ham and cheese on sliced brioche bread will do you well. Makes sure you add those expertly caramelized onions.

English menu available.
Nearby Sights: Montjuic, Placa de les Drassanes, Santa Madrona, and the fine drag queens at El Molina, who will try to convince you to come inside for a show. 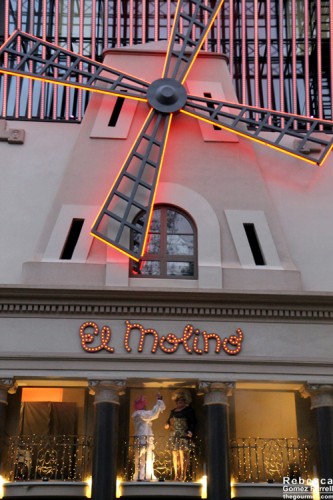 Next up: Spending the day at la Sagrada Familia. Not a dining highlight, but the highlight of my whole trip.

Restaurants were visited in December 2014.

One thought on : Breakfast Highlights of the Eixample