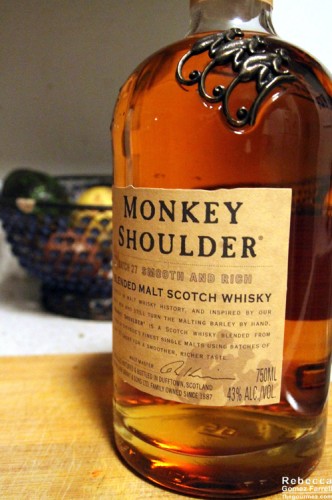 I picked up this triple malt Scotch whiskey from Trader Joe’s. The company’s been around since 1887, and this spirit takes its name from a medical condition that men used to acquire from working the malt press. I imagine it wasn’t fun to deal with, but it is a fun name for a whiskey now! 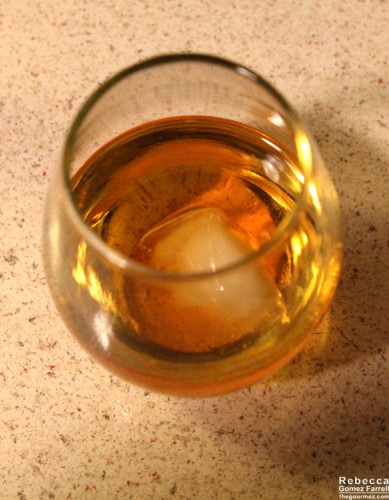 The color is dusky yellow with a rose-orange pit that gives it personality. It shows plenty of leg, which is probably why I find it drinkable with one cube—I’m not that hardcore of a whiskey drinker, y’all. There’s subdued alcohol heat in the nose with something fruity buried deeper and beckoning. Maybe it’s berry, but I’ll call it apricot with allspice and clove.

The alcohol’s a lot hotter going down, but not so much so that I find it unpleasant. The burn is laced with caramel and that apricot, and then the spices take over boldly and strongly, bringing some cayenne with them. Okay, not some, but a lot of cayenne. This is an apricot masquerading as a caramel apple masquerading as a Hot Tamale candy.

4 Stars. Neat: A healthy whack of honeyed sweetness hits first but rapidly dries on the palate to reveal some English orchard fruits and citrus. A fair amount of malty notes follow, together with a much more subtle hint at olives in brine, which offers an enjoyable, almost chewy mid-palate. Just as you think it is going to fade into obscurity, a surprisingly medicinal finish creeps in to surprise but not offend.

By and large, it’s a classic Speyside whisky. The big malty character offers light, brown-sugar sweetness, backed by notes of heather, and intriguingly, distinct touches of iodine. Underneath that you’ll find cooked fruits, chewy toffee, and notes of incense. It’s more exotic than you’d think. I keep going back to this malt… it’s an easy whisky to like but one that invites tons of discovery.

Monkey Shoulder has a light-to-medium mouthfeel.  It’s a pretty straightforward Speyside Scotch: very pleasant, well-rounded, and balanced.  Could spend a little more time maturing in barrels but still very drinkable.  It’s silky smooth with subtle leather notes and vanilla. This whisky has a very nice finish—malty and pleasant. Monkey Shoulder is a good whiskey at a great price point, earning a rating of 82 out of 100. Of all the blends readily available, Monkey Shoulder is surely one of the better ones.