The newest burger joint in Hayward is Red Rocket Char Grill, right in the heart of the downtown strip (1057 B Street). 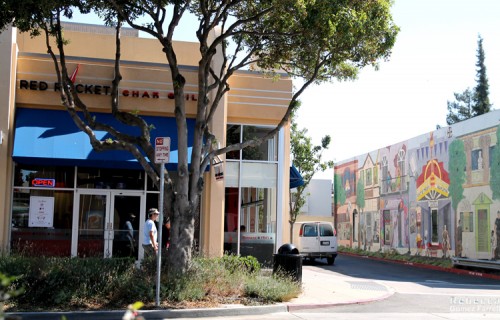 This qualifies as the second echelon of burger joints, the ones classed up enough that you don’t worry about whether your chair will collapse beneath you or if you’ll pick up splinters from the table. Being on the second echelon doesn’t mean they make a better burger, but atmosphere can definitely affect opinion. 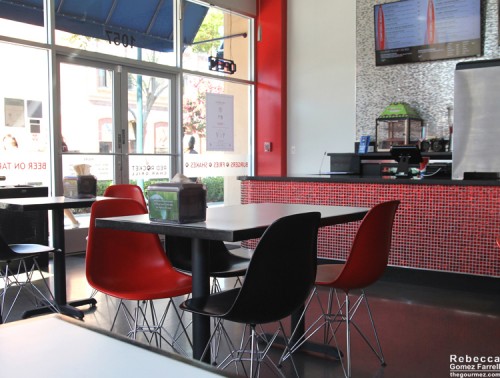 Red Rocket’s red-and-black checker design, complete with a tiled mosaic wall in back, is assuredly more inviting than my first two stops. But it comes with a black mark from my husband; he swears it takes far too long for a fast food restaurant. So I’m counting the minutes from order placed to order up.

In addition to burgers, Red Rocket offers chargrilled chicken, sausage, and steak sandwiches and salads—they all have “rocket” as part of the name, but somehow I doubt I’ll be calling them that instead of burgers anytime soon. Standard potato, garlic, cheese, and sweet potato fries are available as sides. For dessert, the expected trio of shake flavors appears….and New York cheesecake and churros! It’s good to have choices.

Of their 9 burger varieties, including a one-pound Monster Rocket for overachievers, I picked the BBQ Rocket. 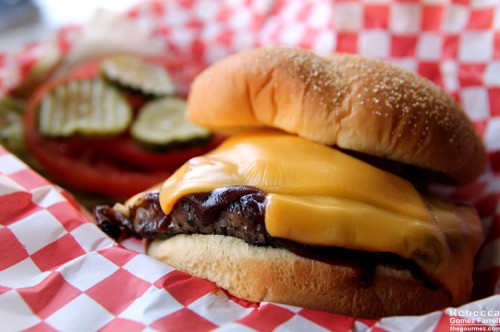 The Patty: Large in size, moderate flavor, good char from the grill.

The Bun: A plain, white bun with semolina sprinkled on top. It held up well, though it still suffered from “disappearing bottom bun” syndrome at the very end.

The Cheese: The BBQ Rocket doesn’t come with it, so I added on American for $1, which reminds me that I found the extra toppings pricey, from $0.50 for jalapenos to $1 for cheese and grilled onions to $1.25 for avocado, grilled mushrooms, and bacon. But I can’t complain about the plentiful helping of cheese, and it needed just a smidge more time on the grill to be as melted through and drippy as I’d like.

The Toppings: The BBQ Rocket comes with barbeque sauce (sorry, Red Rocket, but I rather doubt it’s famous, though it is tangy), lettuce, tomato, pickles, and grilled onions.  As you can see, it comes with the cold toppings on the side so you can build it to your own liking, and they were fresh. The plentiful, thin rings of grilled onions were fantastic and why I chose the BBQ Rocket over one that came with cheese in the first place.

The Fries: Exactly my least favorite type, about 1/2-inch thick all the way around. 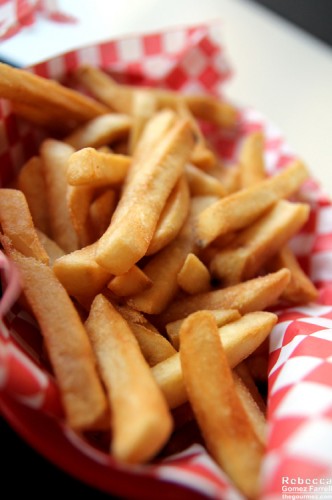 But they were fried to a great crunch, making me very forgiving. Salt was used with restraint as well.

The Shake: The appearance of strawberry preserves in the shake surprised me! 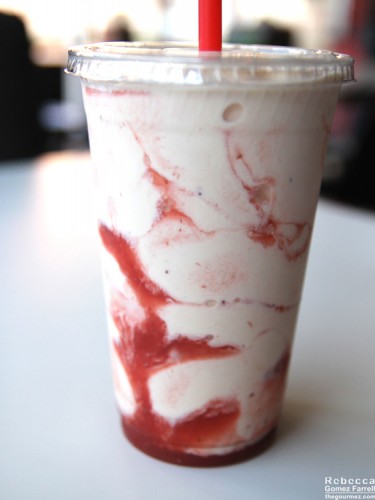 They definitely kick the shake into full-on dessert mode. A yummy, super-thick dessert that would benefit from having spoons available to help eat it. But I managed to suck up nearly every drop by the end of the meal.

The Value: $15.72 for everything. That’s a good $3-$5 more expensive than the first round of joints I visited. Is it worth it for the atmosphere upgrade? The shake does earn Red Rocket extra consideration, though I wonder if the chocolate and vanilla would impress as much without the preserves. The fries, though not a cut I enjoy, were uniformly crisp, and I haven’t found great fries yet on this quest. So…maybe? I’ll eat there again, but I will resent the price point a little. If they offered smaller sizes and corresponding prices, I’d be more generous in my review.