Tourist Musts for the Outer Banks

View of Kill Devil Hills from our hotel’s beach. Click twice for the largest view.

Last July, I spent the weekend in the Outer Banks for only the second time in the eight years I lived in North Carolina. My first trip was camping on Ocracoke, the most remote of the islands, so I had never done the typical tourist activities in the more accessible areas, and I wanted to hit them up before we moved. Luckily, friends Laura and Ellen came to the rescue! In one whirlwind weekend, we covered each of these must-sees of the Outer Banks.

Climbing the dunes. Click twice for the largest view.

Jockey’s Ridge is the largest sand dune formation on the East Coast. Not to brag, or anything, but the West Coast has it beat easily for height. That doesn’t take away from the beauty of these dunes or of the multitudes of people who come to fly a kite in the open air. We visited at sunset and conquered the short, but calf-burning, hike from the parking lot to be rewarded with gorgeous views and kites of all shapes and sizes. 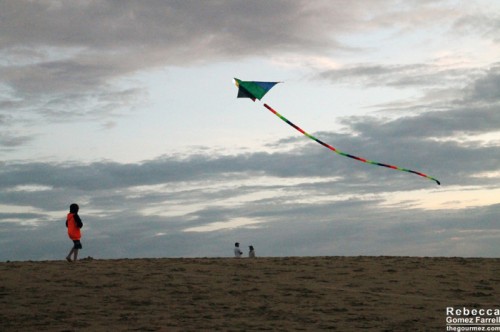 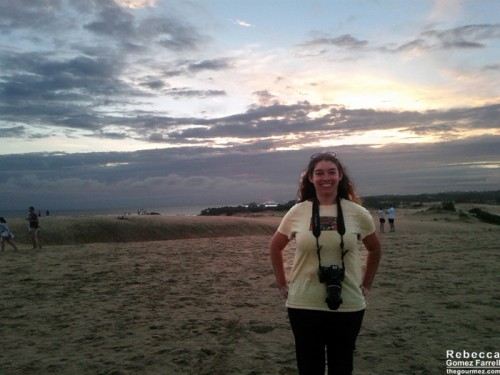 Me with the sunset to my back.

360-view from the Ridge, featuring Laura. Click twice for the largest view. 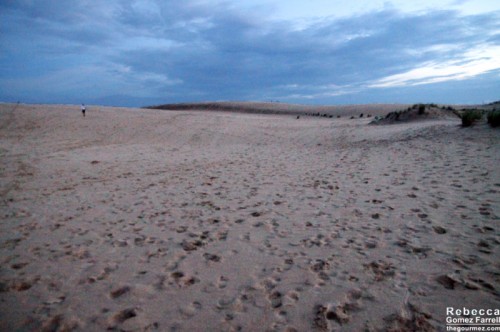 Exiting through the same path many have walked before. 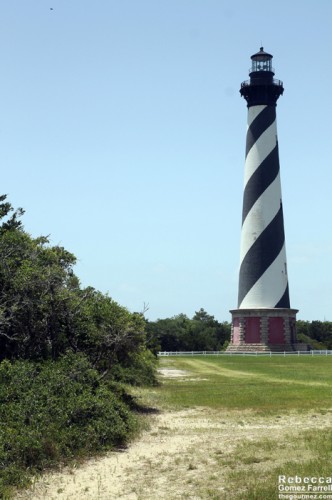 The Cape Hatteras Lighthouse is the most iconic of the Outer Banks’s eight lighthouses. Getting there from Nag’s Head takes about an hour and a half at the slow highway speeds of the Outer Banks, so it’s a great excuse for a leisurely drive. If you’re like us, you may as well check off the Bodie Island Lighthouse, too, which is just slightly off-route. 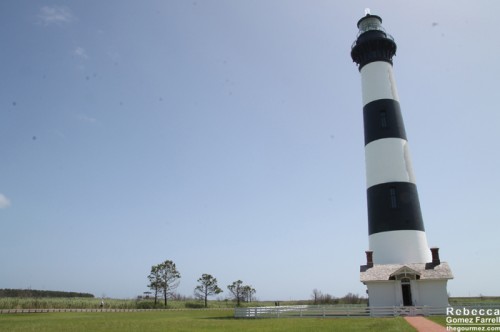 Keep going south on the highway after, but do stop at one of the many beach turnoffs for a refreshing dip in the water. A run across a hot sand pathway is totally worth it, as Ellen can attest. 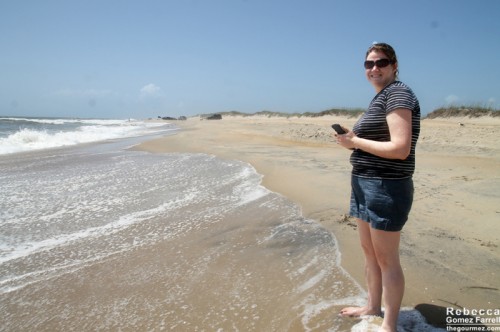 Once you pass Buxton, the Cape Hatteras lighthouse won’t be much farther, but rather than make straight for it, head to the nearby beach to see where the lighthouse stood before it was moved inland in the 2000s due to shoreline erosion. I thought the ruins of the foundation were very picturesque. 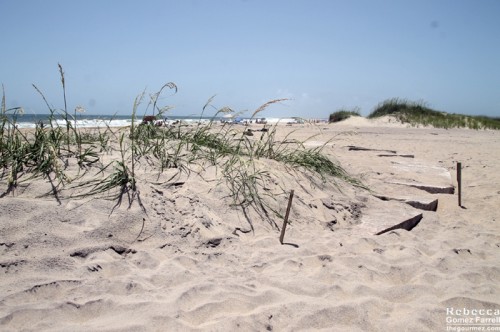 Take a few photos then look up to find the lighthouse in view. Then walk on over to it! 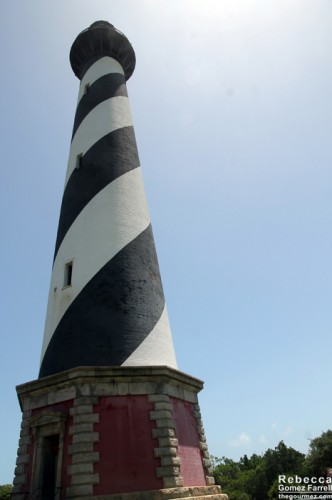 You can climb up all 208 feet of the tower for a fee, but we passed on that opportunity. It was a hot and humid day, and there were more sights to see!

360-view from the Memorial’s base. Click twice for the largest image and find Laura and Ellen!

From a photographer’s perspective, this tourist destination is one of the most beautiful I’ve shot at. It helps that we had gorgeous skies, but I think the design of the Wright Brothers National Monument is simply gorgeous. Ascending one of the several hillside paths is worth the view times a million. 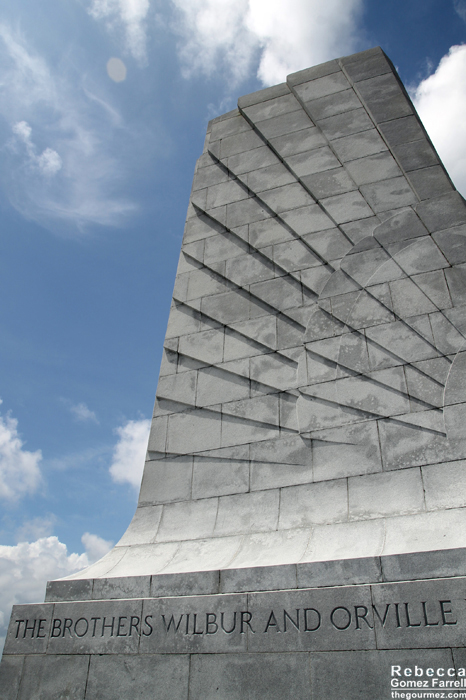 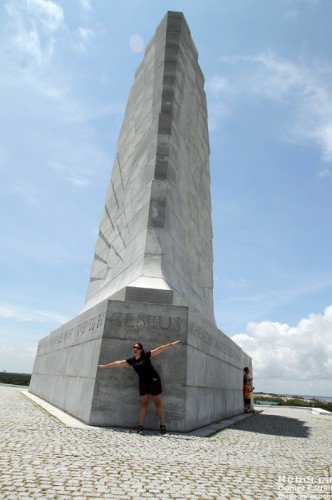 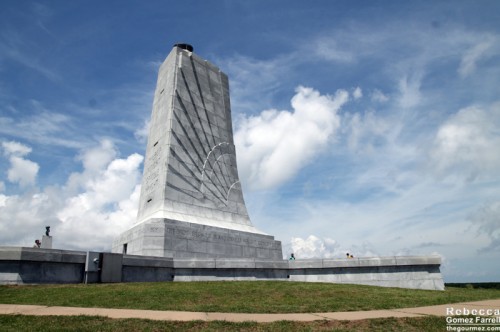 There is more to this park than a scenic view, of course. Spending the minimal fee on parking gains you access to the rest of the grounds and the museum about the Wright Brothers’ flying achievement. The latter includes several replicas of their earlier machines, 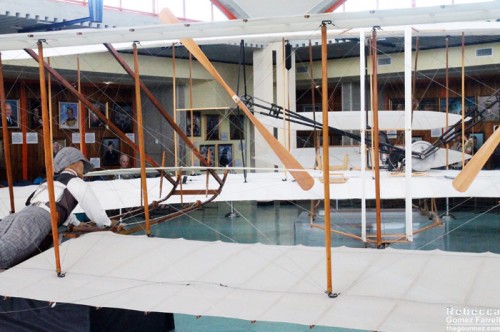 –as well as a history of their time on Nag’s Head and records of their previous attempts at flight. The grounds include markers that indicate how far their glider went on each historic take-off— 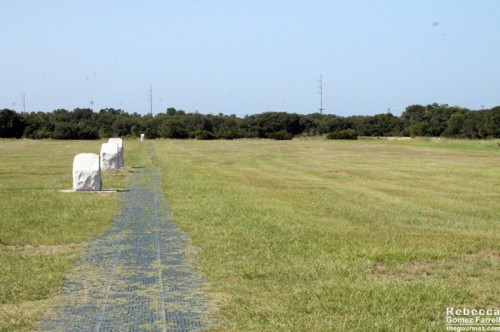 –and a life-size recreation of the event in bronze sculpture that I thought was pretty rad. 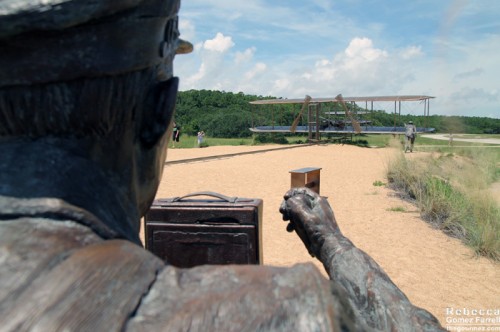 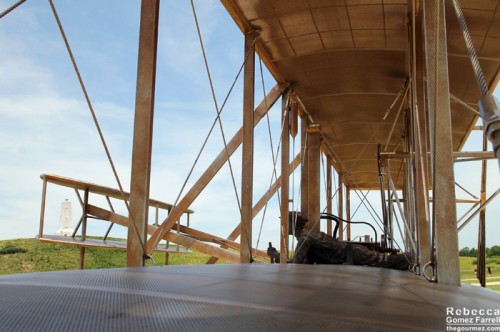 You can even explore the park at your leisure because the $4 buys you access for multiple days.

Roanoke Island is where the first English colony was founded in the United States. That colony disappeared without a trace three years later, thus earning it the name the Lost Colony.  The Festival Park celebrates that colony’s history through several different recreations, including an American Indian village, a settlement village, and a 16th-century longship. Additionally, the site hosts multiple museum exhibits and a waterfront pavilion. 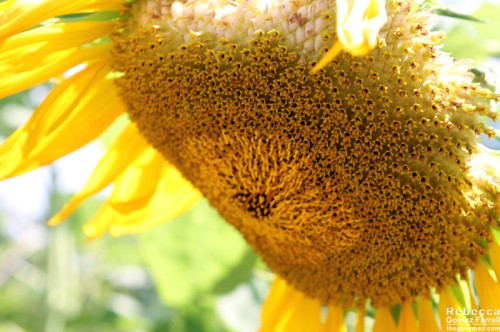 Sunflower in the American Indian village.

Spiritual totems at the American Indian village. Click twice for the largest view and to see Ellen! 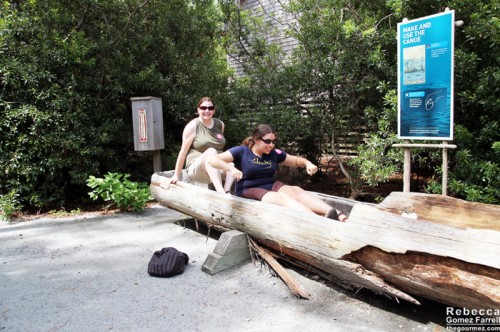 Sharing a canoe with Ellen. 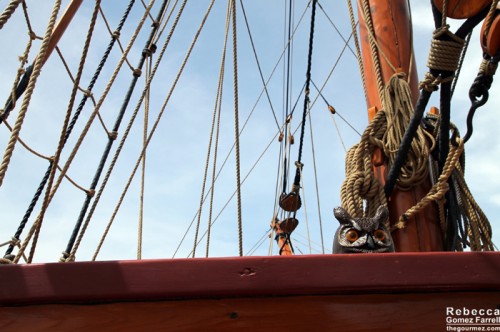 Plastic owl keeping away birds on the Elizabeth II reproduction. 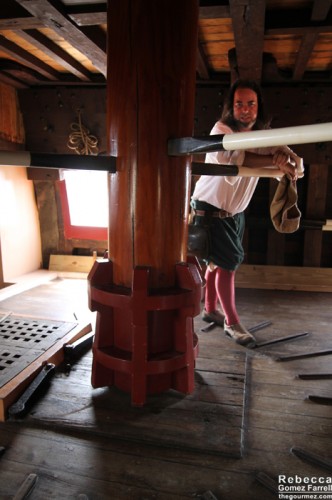 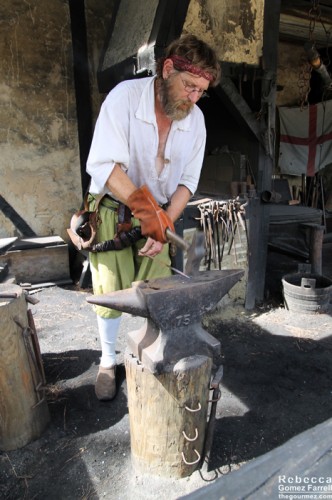 Blacksmith at work in the settlement.

$10 isn’t a steep price for the attraction, but I must admit, I found visiting the free, open grounds of Fort Raleigh just as interesting as I did exploring these recreations. That is next on the list!

My primary motivation for this Outer Banks trip was to see the Lost Colony musical that shows every summer at the Waterside Theater on the Fort Raleigh grounds on Roanoke Island.

Inside the Waterside Theater with the Albemarle Sound in the distance. 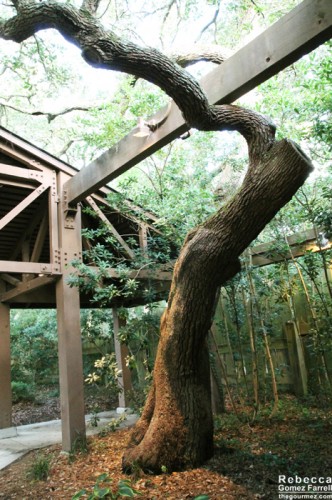 One of many trees growing in the theater’s foyers.

The theater and the musical were funded in part by the New Deal’s Works Projects Administration, and they have told one version of the colony’s founding and demise nearly every year since 1937. Tickets are quite affordable for the show, and I was honestly surprised at how elaborate it was! I didn’t expect a full-scale production. 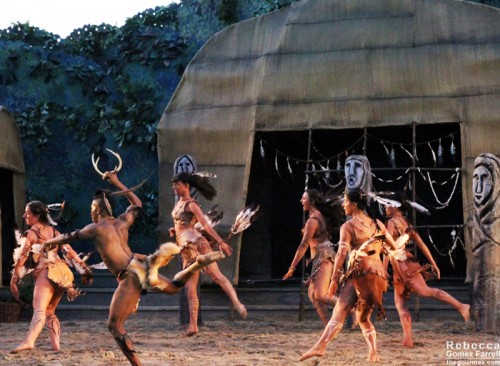 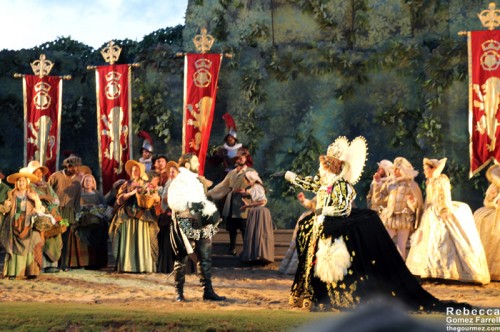 Other than finding the material dated, and what material wouldn’t be after 75 years? (Shush, Shakespeare groupies!), I am truly glad I went.  Make sure to arrive early enough before the show to explore the grounds of the park as well, which is located where at least part of the Lost Colony actually existed. 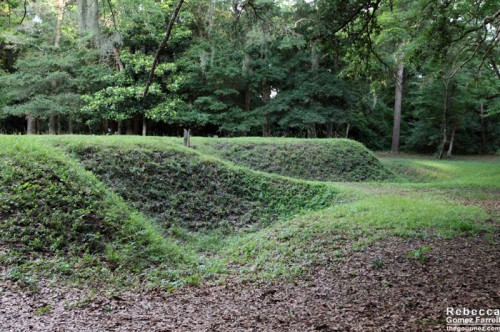 If you go during park hours, you can also learn about the history of Roanoke’s Freedman’s Colony and the early experiments with radio that took place in the same location.

Finally, spending some time at the Manteo waterfront and its cute shopping village is a must for tourists at the Outer Banks.  Stroll around the area, and your eyes will find plenty to feast upon, whether actual food— 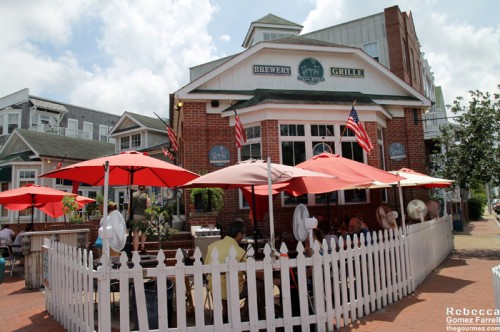 –or the views from the pier—

–and across the marina to the Elizabeth II reproduction in the distance. 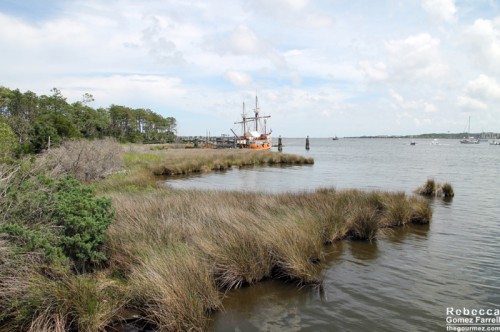 It was a relaxing way to end our weekend of Outer Banks insanity. Thanks to Laura and Ellen for that last hurrah of tourism in North Carolina! I needed it. If you’d like to see more pictures from the trip, you can find the Lost Colony play here, the Wright Brothers National Monument here, the lighthouses here, and Jockey’s Ridge here.