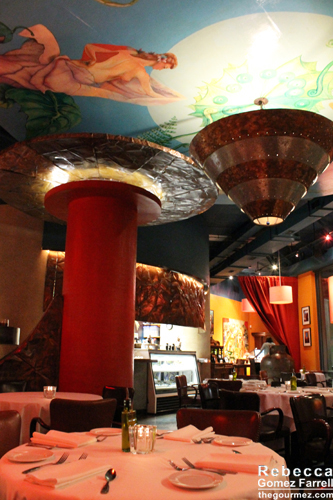 Parizade’s interior, as whimsical as ever.

The last time I blogged about Parizade, a Giorgios Group restaurant, was all the way back in 2007, so I was due for a revisit even if they had not approached me to try out their new prix fixe menu. It’s an insanely good deal for $35 a head. It’s an even better deal if you get to try it for free, so thank you, Parizade, for the opportunity! (Obligatory disclaimer? Check.).

The Prix Fixe special is offered only on Friday nights and only for the summer.  It focuses on one of the Mediterranean countries from which Parizade takes it inspiration at a time. Spain and Morocco have already been highlighted, and June and July entertain Italy’s cuisine. August will focus on Greece in time to celebrate Parizade’s annual Greek festival at the end of the month. Didn’t know Parizade had an annual Greek festival? Neither did I!

The Italian prix fixe included five courses, which is part of why that $35 is such a bargain. The first course was a colorful beginning to the meal by way of minestrone. 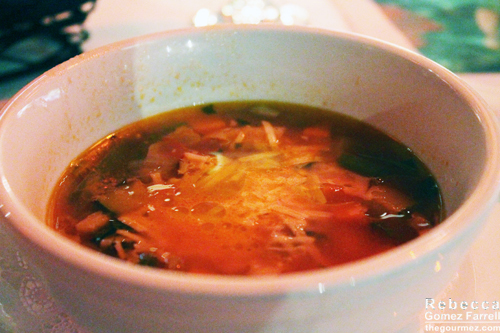 While I am not a fan of minestrone or most broth-heavy vegetables soups—I have a hard time being convinced that overcooked vegetables are worth eating—the tarragon gave this soup a vibrant kick, and I admired the artful splash of parmesan on top. I was more interested in the great bread served before the meal, however, a mix of seeded, focaccia, and soft Italian white. 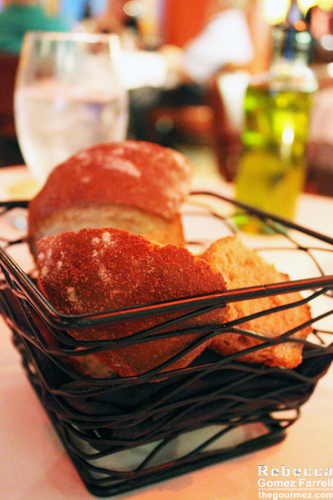 The olive oil served tableside was very nice as well.

Course #2 was our first clue at what we had gotten ourselves into. Namely, the prix fixe menu had several items listed under each course and that’s because we were served them all, family style. No picking one option under each listing for this meal! So the antipasti included cantaloupe with prosciutto, 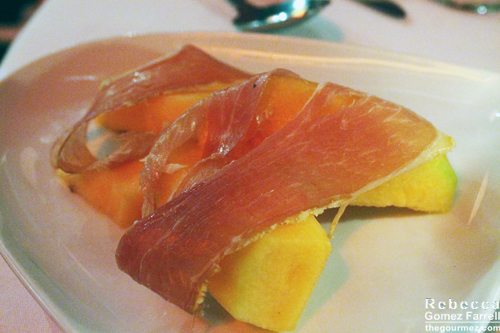 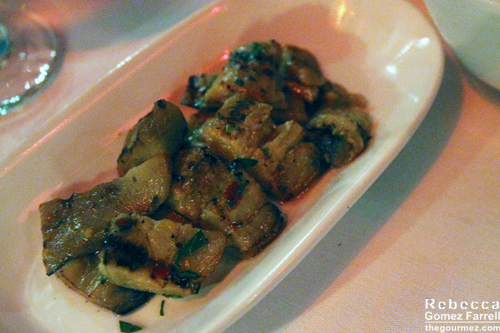 a caprese salad of heirloom tomatoes, 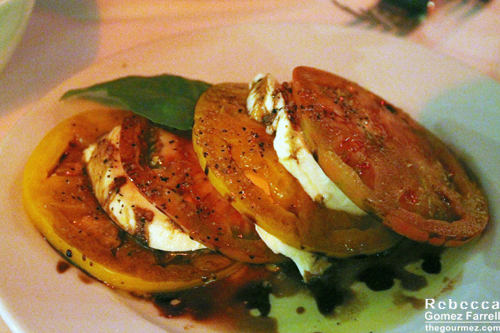 a bowl of arugula with an exceptionally tangy lemon vinaigrette, 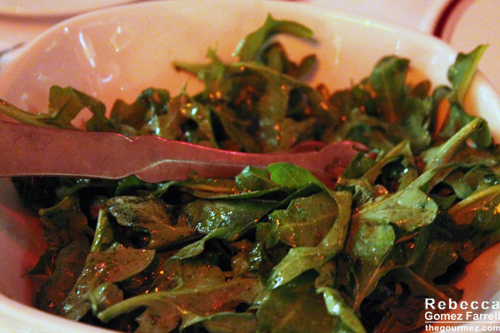 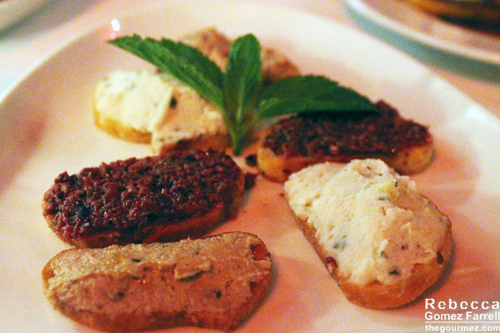 With all that on the table and three courses to go, we knew we were in trouble. But ever the dutiful blogger, I dug in. I was surprised to find the tomatoes lacking in flavor, but the sweet balsamic served with them was pleasing. I found myself enraptured with the eggplant. Despite an overabundance of oil, the cubes’ texture was perfect, nearly the soft consistency of artichoke heart. The chicken liver paté was rich and buttery, but I enjoyed the white bean option the most. The rosemary was an idyllic pairing with the blander bean, and lemon enlivened it. That lemon was almost too much on the arugula, but luckily, there was plenty salt used to balance it. A bite of prosciutto and cantaloupe made for a great ending to this course.

Next was the primi, which typically features pasta. We were treated to two of those as well. 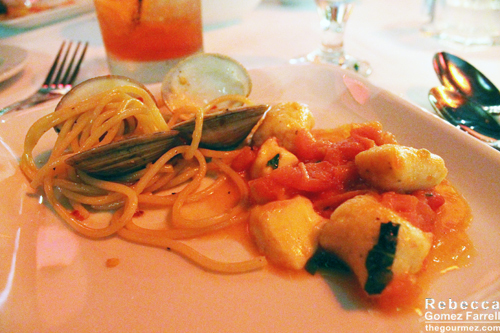 Exquisite al-dente spaghetti was served with manila clams and a unique and surprisingly light yet buttery pepper sauce. The gnocchi’s sauce of tomato and green olives was more typical, but smoked mozzarella added depth to the dish, and I enjoyed having gnocchi with a denser dumpling texture rather than the usually fluffy offering.The gnocchi were also served on the cool side, which I found refreshing.

Seconde came next, and our waiter’s appreciation for the mustard and fennel crusted hanger steak was well earned. 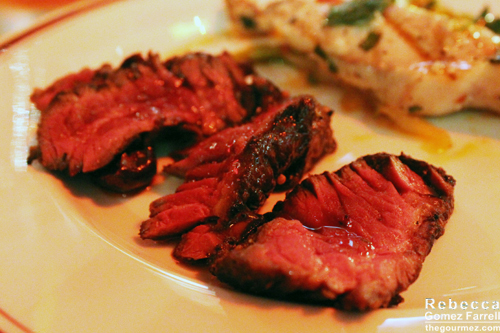 Its delicate flavor and delicious crust was impressive, as was the sweet cherry agrodolce sauce that accompanied it.  There was no sour in that sauce, which you would expect from an agrodolce, but I did not miss it.

The second entrée, swordfish escalope, was only slightly lesser in the quality. 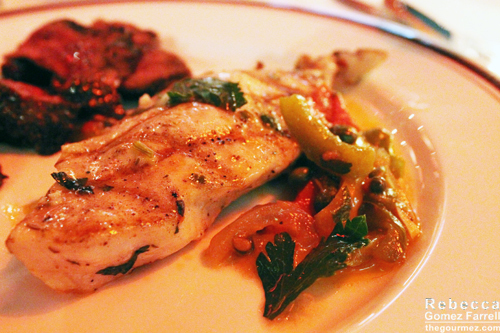 The super fluffy fish soaked in the caper-infused pepper sauce, creating a bright contrast with the richer steak with every bite. Both entrees were accompanied by Sicilian spinach with pine nuts, sundried tomatoes, and raisins and golden roasted potatoes. 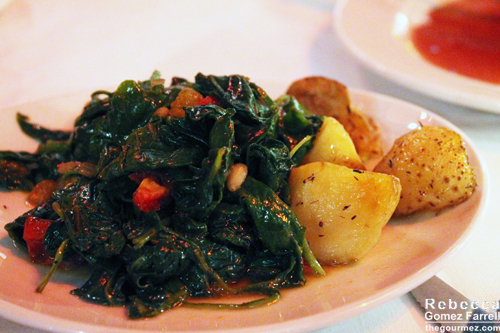 The sundried tomatoes were a nice touch, but the side took its rightful place in letting the meats shine for this course.

We did not finish our entrees, but that didn’t stop the chocolate-pistachio semifreddo from being fully appreciated. 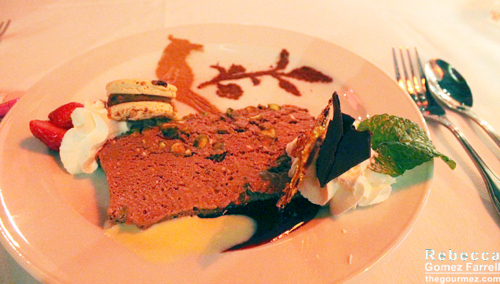 Parizade always serves dessert with attractive cocoa-powder stenciling, and the prix fixe options are no exception. My plate received a bird with a branch and my husband’s a pair of butterflies. That bitter powder rounded out the dessert’s sweetness, which captured that intriguing elastic semifreddo texture well. The pistachios in the semifreddo and accompanying chocolate macaron were on the chewy side, but the raisins popped, and the shaved chocolate, drizzled sugar square, crème anglaise, and berry sauce all added nicely to the dessert. The berry sauce was especially welcome, even making the sugar take on a bit of its liveliness. Some might say that’s too much on one dessert plate, but not I!

To wash that giant meal down, Parizade recommends a negroni sbagliato cocktail made with Campari, sweet vermouth, and Prosecco ($8). 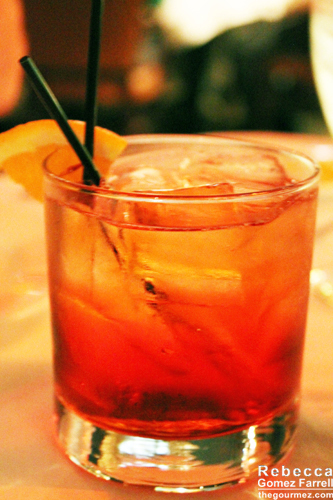 Both my husband and I had it, and the Campari’s bitterness was right on the edge of pleasing and too much, which makes it a prime digestif choice. It resembled a mandarin orange complete with pith more and more with each sip. I quite liked the effect.

If you are interested in celebrating the Mediterranean and want to spend a relaxing Friday night indulging your taste buds, you will get your money’s worth with Parizade’s prix fixe offerings this summer. The hanger steak, semifreddo, and eggplant shone brightest among the constellation of courses, but rest assured, there are enough options to please everyone in your party.