Ninth Street Bakery is getting into the pop-up restaurant fun in a slightly different manner than most. On Saturday nights, dinner is now being served inside the bakery. So it’s not the locations or times that pop up but only the menu. Chef Matt Props, who also plans the bakery’s daytime food specials, has teamed up with Ari Berenbaum of Berenbaum’s Bakery Stand to offer these themed dinner menus. They have done Indian cuisine, Southern soul food, and ramen nights so far, and the menu tends to run from two to three weeks. All the dinners are vegan, which I’m sure those of you who’ve mourned the loss of the Fiction Kitchen’s vegan brunches at the Pinhook will rejoice over.

I checked out Day One last Saturday, when the theme was corner stores and bodegas. This menu had more of a progressive goal than the previous ones have had, highlighting what’s available at the food deserts common in parts of Durham and all over the US where a convenience store is the only grocery option for many people. Chef Props reimagined classic corner store items, giving them twists by making them from scratched and livening them up. Here was the menu: 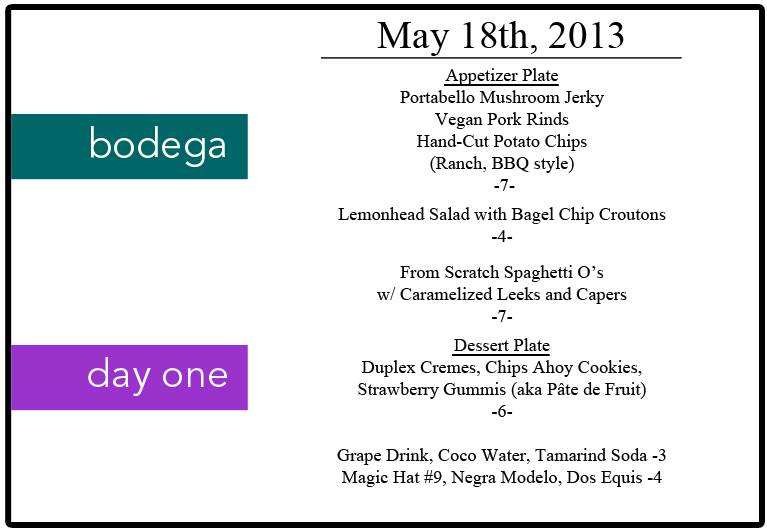 I only had a small taste of the pork rinds and mushroom jerky. 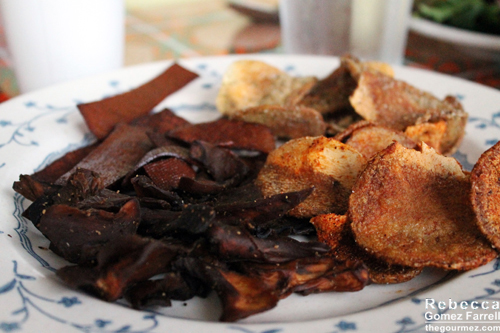 That pile was higher, but one friend got rather addicted to the pork rinds, so it went fast. They were fried and smoked tofu skins. The mushroom jerky was similar, and both had too much smoke for my taste buds, but that flavor is addictive whether you enjoy it or not, which reminds me a lot of eating pork rinds and jerky. So spot on, chef, spot on. 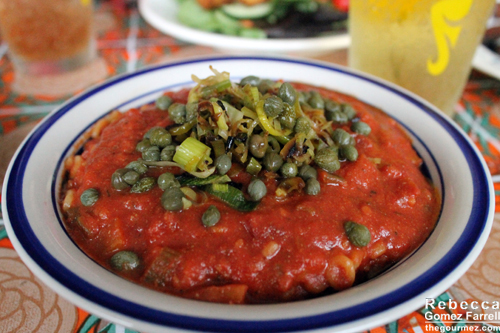 The spaghetti o’s were remarkably similar to the real thing, down to the noodle rings dissolving with each bite. Heavy, fresh marinara with lots of stewed tomato served as the sauce, and the capers and leeks added bold flavors. The helping size was enormous. I’m not sure I’d choose it on my own in a restaurant, but that wasn’t the point of this menu. 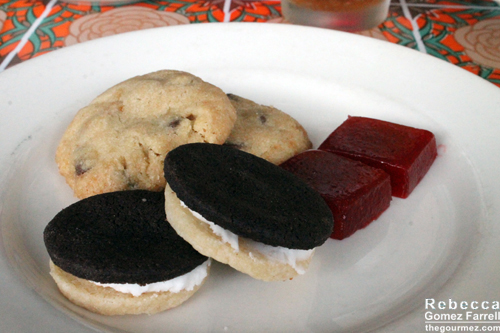 The desserts were another successful attempt at mimicry. The duplex creme cookie was fantastic. I had no guilt associated with its consumption. One friend described the strawberry jelly’s texture as canned cranberry sauce, and it was a tart, sweet treat. The Chips Ahoy knock-off was bland by comparison.

Beverages included the ubiquitous “grape drink” as well as tamarind soda and Coco water. Cider, beer, and wine were also available for $4–5. My cider was super refreshing on a humid evening on the covered patio. 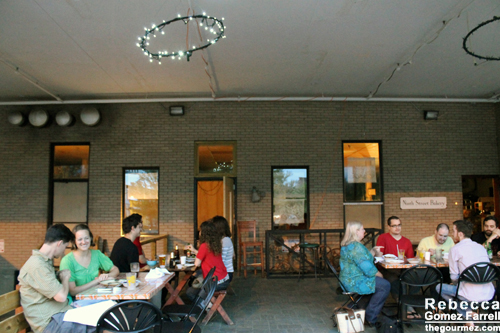 I’m not sure this theme was the best for getting folks in to dinner—fancy spaghetti-o’s sound only so enticing. But I’ve heard great things about their previous pop-ups. In the future, Day One will focus on more family friendly options and lowering prices to go along with that. Family Night starts on June 1 and will include pizzas and chicken-fried tofu tenders.