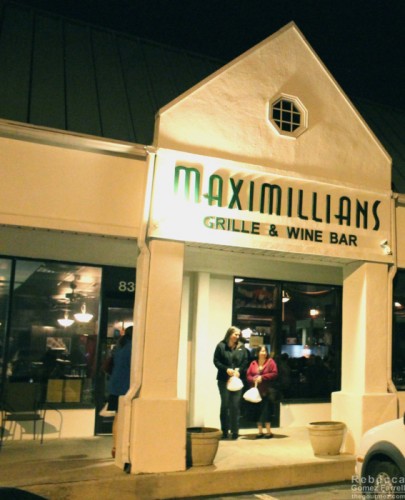 Maximillian’s Grill, not to be confused with Maximillian’s Pizza Kitchen next door though I’m going out on a limb and saying they’re related, appeared this year on Greg Cox’s annual list of top 20 Triangle restaurants. It always flies under my radar; I keep forgetting people have recommended it, but the placement on Cox’s list stuck it firmly in mind this time.

The menu is manic, reaching into Asian, Mexican, Southern, and Nouveau American cuisines, sometimes all in the same dish. Spiciness in many forms is its main unifier. Usually the spice is conveyed through sauces with names like hellfire, demon, and voodoo. As a lover of all things fiery and kitsch, that is not a problem for me. Our waitress deserves bonus points for remembering the details of 2 appetizer specials, 6 entrée specials, and 2 dessert specials. This is not a restaurant that dreams small. 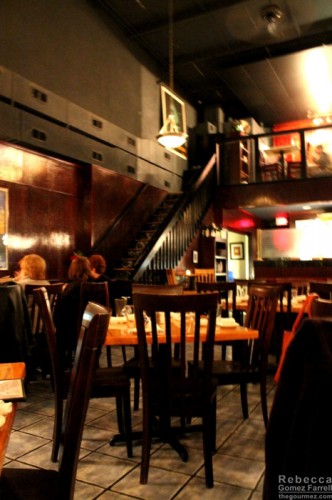 With that sort of menu, I expected a bolder atmosphere, but Maximillian’s sticks with a cigar room and steakhouse feel. It’s pretty dark (standard apologies for the photos), and walnut wood paneled the walls. It’s also rather cold early evening, likely due to the floor-length windows and stone-tiled floor. But the place warmed up well enough when more people came in. By 7 pm, it was hopping. Contemporary pop played from hidden speakers.

The wine list underwhelmed, mainly because the cheapest glasses are $10. The cocktails are similarly priced, so I chose one of those instead, the Blood and Sand. 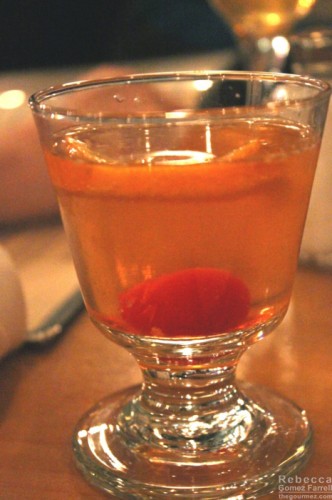 It took an imaginative route toward a manhattan’s flavors by combining salty caramel vodka, Dewar’s scotch, vermouth, an orange twist, and a maraschino cherry. Pretty in the glass, and I was surprised by how the caramel’s sweetness imparted bourbon characteristics to the Scotch, thus invoking my impression of it as a roundabout manhattan. The caramel note lingered pleasantly.

Friend #1 ordered us Max’s Bread Plate, a very fresh loaf of rosemary bread with balsamic, olive oil, and what is dubbed a “slurry” of fresh herbs for dipping. Chefs, I love creativity in menu writing, so I’m all over terms like slurry. Shaved asiago came on the side. 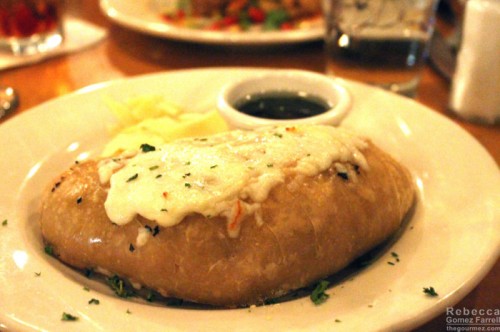 The bread was yeasty, doughy, and topped with a little melted mozzarella and herbs. Most of the table loved it, but I was on the fence. I like my bread more baked, though the rosemary flavor was unquestionably great. Watch out for the balsamic! It was potent, but its herbal qualities make it delicious in small portions.

We all had first courses, and Friends #1 and #2 opted for the lobster and shrimp bisque on special for theirs. They thought the soup was excellent, especially appreciating the chunks of shrimp. It had a mild kick. The packet of oyster crackers, however, was surprising for an establishment of this caliber. They make plenty of bread in-house — why not a slice of that instead?

Friend #3 and I had the crab and shrimp cakes. They came with a Vietnamese-style carrot and cucumber slaw and nam pla and ginger-palm sugar sauces. Cilantro was tossed over everything. 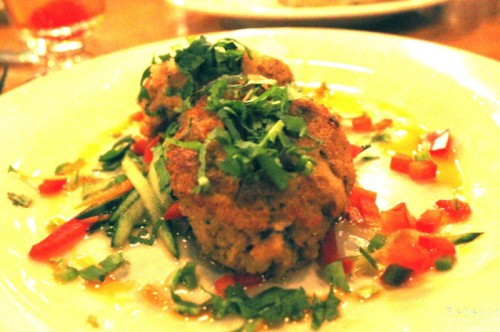 I enjoyed this dish quite a lot, especially the delicate combination of the nam pla’s fishiness with the sweetness of the ginger-palm sauce. The vegetables were raw, crunchy, and good with the sauces, but I was left thinking the dish wasn’t quite finished yet, like there was a way to better combine that salad with the crab-and-shrimp cakes. Those were tasty, and the addition of shrimp livened up an old standard. It could have used a stronger binding agent to give it more texture. Overall, the dish did not come together, but the different parts of it were good on their own.

Friend #3 and I were twins this meal, because we both ordered the pollo el magnifico as well, a cornmeal-crusted chicken breast served over a chile rellano stuffed with rice, black beans, chorizo, and corn. Guacamole was also advertised in the description. 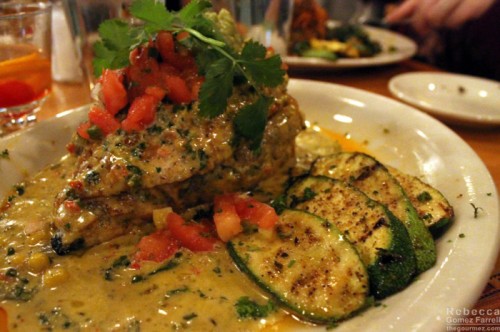 Why yes, Maximillian’s is an appreciator of the high-pile presentation style. Why do you ask? Ignore my cheekiness because I genuinely appreciate the high pile. It always has an impressive effect. Additionally, Maximillian’s follows the school of huge entrée portions. Each one was easily two meals, and they were all served with four slices of deliciously charred zucchini. I loved the unusual chile rellano filling; usually, a rellano is chockfull of cheese with or without meat. This time, the cheese was absent, present only in the creaminess of the demon sauce. Having that potentially, but probably not in reality, healthier filling made me feel better about eating it. However, my pepper was crunchy and burnt on the bottom. The demon sauce was made of creamy white cheese and … chile oil? Whatever demon’s in it, the sauce was good. It also smothered the dish, which isn’t necessarily a bad thing but I think all the cornmeal batter just melted away into it. The end result was a plate full of saucy delishness (I’m sure that’s a real word somewhere) that satisfies rather than an entrée with an insightful combination of ingredients. For $19, I expect the latter, but that doesn’t mean the former isn’t tasty.

But we must talk about the guacamole. You know me, readers. You know an avocado is my second-highest rating option. Then you can understand how disappointing it was to me for a description to advertise guacamole and then end up with less than a tablespoon of it on the top of the dish. Even sadder was that the smidgeon of guacamole tasted overwhelmingly of lime. I will never recover from that grave disappointment. Friend #3 had no quality control problems with her rellano, though she was perhaps more distraught than I over the state of the guacamole.

Friend #1 had a stuffed pork entrée with spinach and polenta that she was very happy with. She called the pork robust, the fillings nice, and the fried sweet potato strips on top a definite plus. Friend #3 went for one of the many specials, an on-the-bone veal dish served over mushroom ravioli and asparagus. 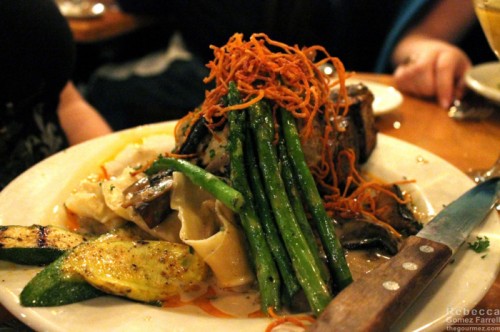 I had to take a picture of that one despite the lighting — it was massive. She thought it was pretty good, though the veal a shade rarer than she prefers. It was difficult to eat the meat as presented, but the mushrooms and ravioli were delicious. The asparagus, to my palate, was slightly undercooked.

Our fabulous waitress boxed up the second halves of our dishes, which is always a nice service. Then we turned our sites to dessert. When considering their dinner menu, it’s surprising how firmly Southern the dessert offerings were:  coconut cake, bourbon pecan pie, bread pudding, and the like. We all agreed the raisin bread pudding deserved high marks for its custard qualities and great flavor. Friend #3 thought four layers of frosting and cake was overdoing it for her carrot cake, but she is not a big frosting fan. Friend #2 enjoyed the bourbon and chocolate pecan pie, but she felt the chocolate took away from the pecan pie filling.

I had the fudge brownie meltdown, which is just a brownie sundae. 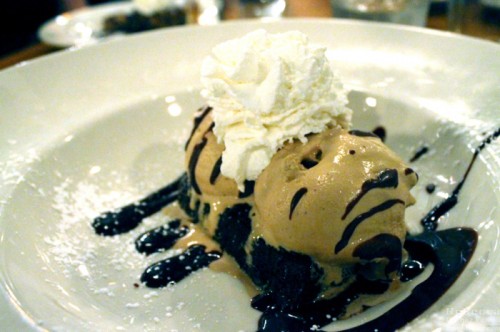 What made it memorable was having it served with the gelato du jour, a rum and caramel flavor. The chocolate and walnut brownies soaked those flavors right up, making for a satisfying end to the meal. Be careful if you’re not a big fan of rum, however. It packed a punch!

My meal at Maximillian’s left me happy and satiated, but I found the restaurant lacking in terms of sophistication for the prices. The cocktail list is exempt from that conclusion, but the rest of the food, while good, was not quite there in terms of execution for a $20 to $30 a plate restaurant. I love chefs who experiment with different cuisines and styles, but I think Maximillian’s ingredients aren’t as well-paired in the final dish as they have the potential to be.