When I accepted an invitation to check out the first coffee cupping at the Larry’s Beans roastery, I had no idea that the roastery is literally a Willy Wonka house in the middle of an industrial block of downtown Raleigh. 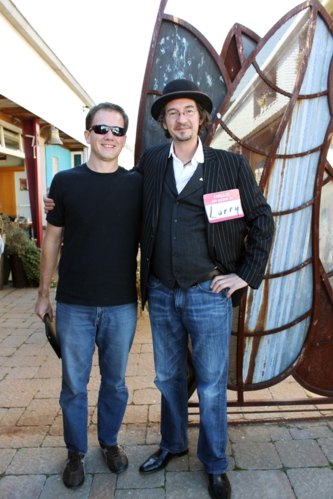 No really, that’s Larry of Larry’s Beans in the get-up. There is no way that the accordion music, opening of the gate, and appearance of Larry could be viewed as anything but a Wonka tribute. And I fully support all of the whimsical silliness it embodied.

The coffee cupping costs $5, although I had that complimentary bloggers’ invitation. It’s a pretty good use of $5, especially if you are unfamiliar with how coffee beans are processed and roasted in addition to wanting to taste the differences between beans from different single-source co-ops. First, though, let me give you a view of Larry’s Beans from the street, because it’s a little difficult to pick out when driving by.

But there’s no mistaking it for any other drab buildings once you’re inside those magical gates. 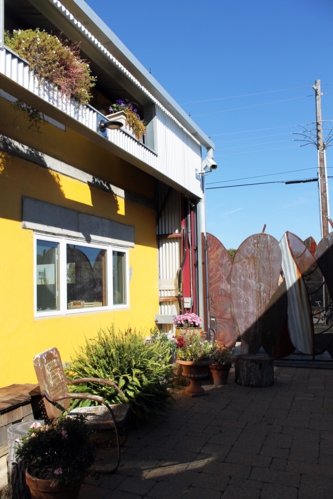 The cupping started with what I would call a cocktail hour, if this were alcohol, not coffee, and it lasted 60 minutes instead of 20. Eh, this is my blog. I’ll call it that anyway. Several of their coffee blends were brewed in thermoses, and their new cold-brew iced coffee was also available. 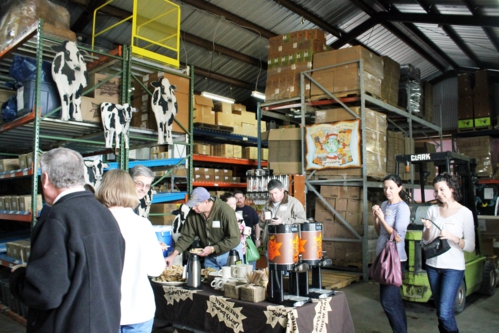 Green Planet Catering laid out a spread of butternut squash and garlic goat cheese on crostini, savory roasted beets and apples on phyllo squares, and a divine take on rice krispie treats featuring Videri chocolate and Big Spoon peanut butter. I may have had several of those. 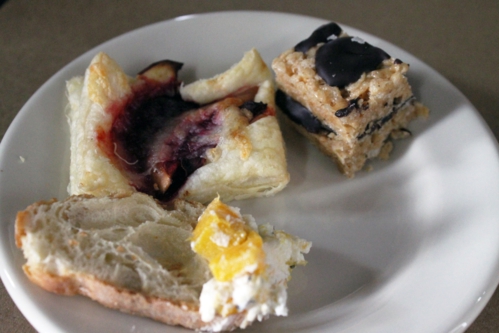 Once the cocktail hour was over, we shuffled to the roastery itself, which was set up for a presentation by chief roaster Brad. 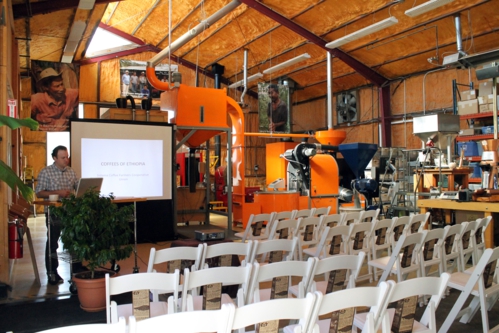 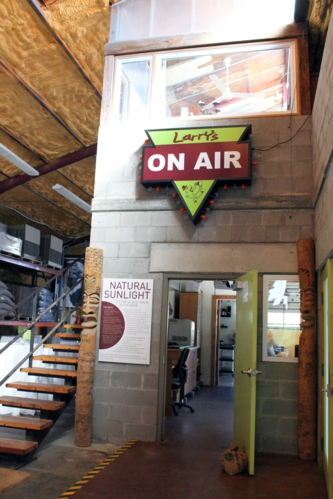 Random radio station inside the roastery. I’ll roll with it. 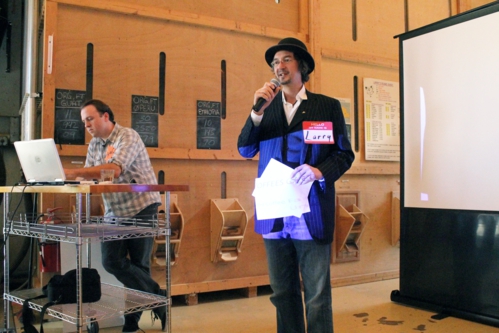 —and also shared a bit about his own coffee background and experimentation techniques. It’s Larry’s passion to bring out the unique flavors of coffee through different combinations of roasting style, time, heat, and other variations. There was no coffee community when he started at Cup of Joe’s in the early 1990s, and he stumbled into a lot of discoveries, like the batch of Ethiopian he accidentally slow roasted to the point that it tasted like chardonnay when brewed. I’d try it, but alas, he can probably never reproduce it again.

Brad took over and guided us through his much more uniform methods for coffee roasting now that he’s in charge of quality assurance. He mainly shared about the Ethiopian regions they source their fair trade beans from. 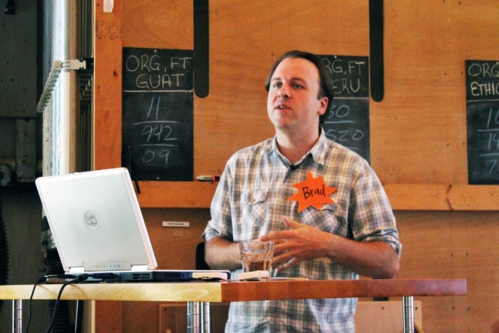 Most of Larry’s Beans coffee beans sold by the bag are blends of a few single-origin sources. And then it was time to learn about this whole “cupping” idea. What Brad recommends is considering 9 different aspects of the coffee being evaluated: fragrance/aroma, acidity, body, flavor, sweetness, clean cup in terms of not having any jarring aberrations in flavor, balance, aftertaste, and overall impression.

We shuffled over to the tasting tables. 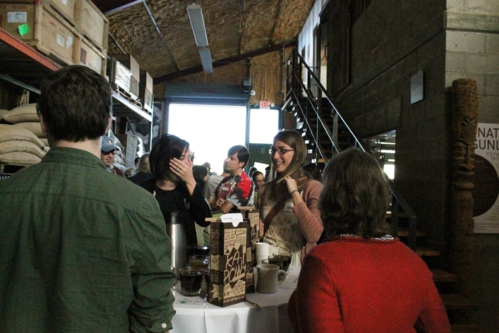 As often happens, my table was full of other food bloggers, and I can never stop exclaiming over what a great community we are. It was awesome to meet Raleigh What’s Up this time and to hang with Triangle Explorer and Triangle Localista again. The four of us along with an incredibly excited, let’s call him avid, Larry’s Beans fan tasted the coffee together.

We cupped beans from three Ethiopian co-ops, which were the Schilcho, Abela Geluko, and Bona co-ops. Three different cups of each were used to ensure consistency between them. 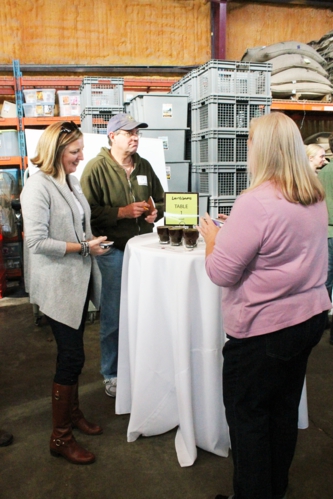 We circled our table, sniffing the grounds first. Then water was added, and we sniffed the aroma of the blooms. 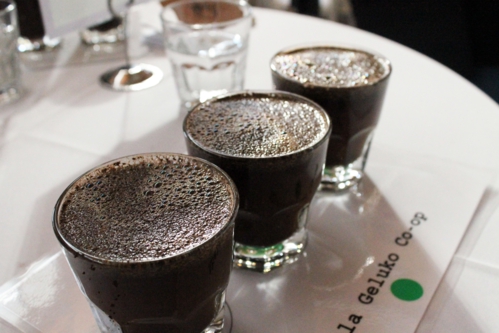 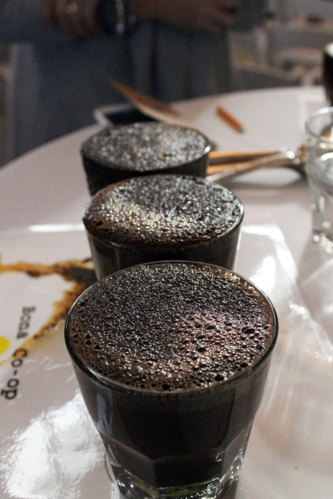 After steeping, Brad expertly demonstrated his coffee-skimming technique, removing most of the grounds from the cups with two spoons. 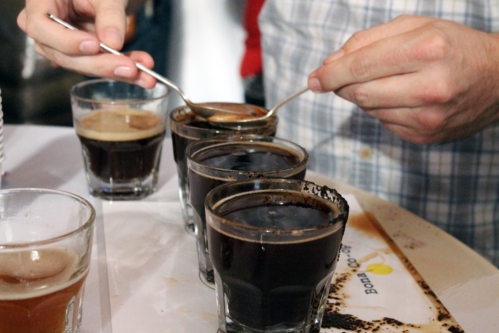 And then … more sniffing while Brad again explained to us what to look for. 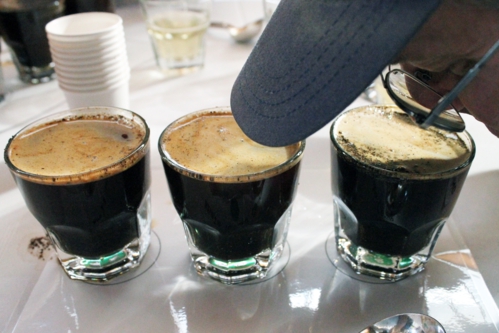 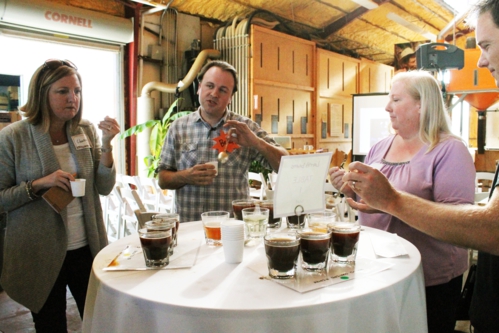 Brad then hopped back to the whiteboard and jotted down the crowd’s overall thoughts on the differences between the coffees. I believe the Bona won me over for its unique blend of vanilla, rum, and blueberry qualities. Yes, fellow bloggers, I just admitted I liked something with blueberry flavors. It’s a miracle!

After the cupping was complete, we were treated to Fullsteam beer samples as well then hung out in the courtyard for a while, enjoying the festive mood that Larry’s Beans engenders. 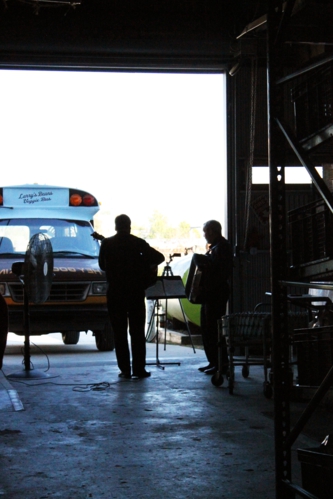 The band plays in the packaging building. 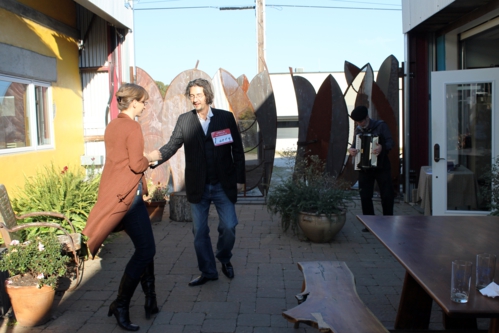 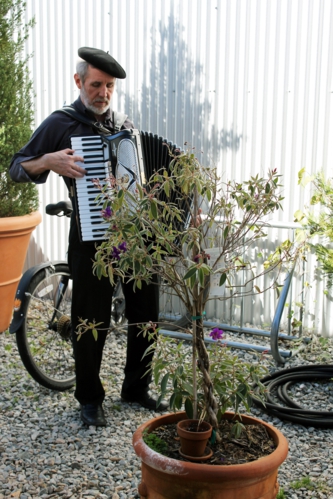 Assuming future coffee cuppings at Larry’s Beans are similar, I would recommend it for anyone wanting to learn how to sample coffee and pick up on qualities that you may not notice in the morning (or all day, in my case) rush for caffeine. As a food blogger, I’ve already learned a lot about coffee-making regions and processing, but that portion of the experience would be very educational if you have not. Learning how to cup coffee was brand-new for me, however, and the experience of just being at the vibrant, charming locale of Larry’s Beans is worth it on its own.

You can read Triangle Explorer’s write-up of the cupping and Raleigh What’s Up’s, too. Make sure you check out the Triangle Localista blog as well, because it’s awesome (I admit no bias).