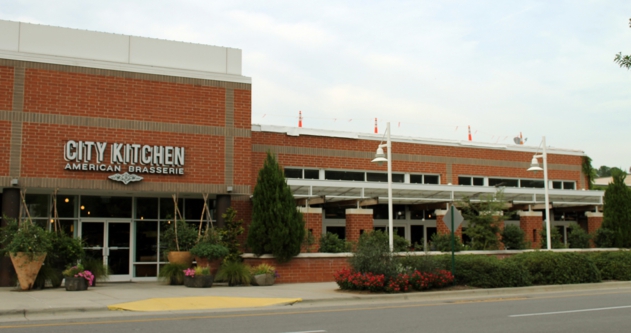 City Kitchen is part of the Giorgios Hospitality Group. It is a remodel from Spice Street, transitioning the huge, open space from a restaurant with dramatic, international flair to more of a French corner bistro writ large. The redesign is definitely keeping with trends—apparently, we all want menus that boast of their simplicity and ingredient focus. City Kitchen delivers just that, especially with its drawings of hogs and chickens on the gigantic chalkboard overhanging the kitchen that, of course, also bears some menu item descriptions. One must have a chalkboard menu for this trend, nevermind the more extensive menus given out at the table.

The space is divided the same as it used to be: an inviting outdoors eating area, a modern stone bar, and a cavernous dining room that now boasts abstract takes on French art mixed in with a rustic country door and chairs that bear the restaurant’s logo in a design my friend described as tramp stamp. 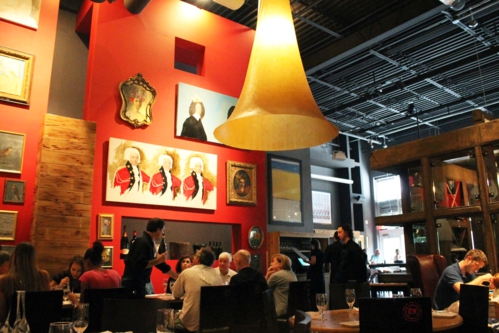 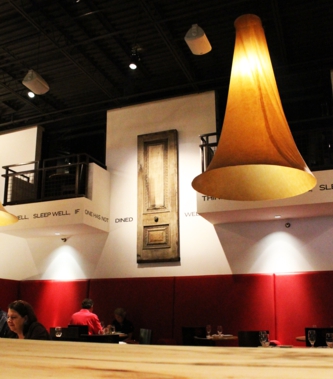 There is plenty of blonde and dark wood in keeping with that hip country theme as well as steel, blacks, and whites. Did I mention they also house a bakery? City Kitchen is the sort of restaurant where you’ll find meatloaf specials comingling with bouillabaisse. A variety of flatbread pizzas and sushi rolls get their own featured lists. There is an affordable cocktail list, which means I ordered one, of course. 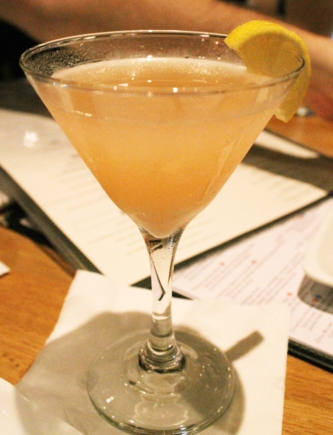 On a Thursday, all the specialty cocktails are $6. This was the spicy peach martini made with peach vodka, triple sec, peach puree, and chili simple syrup. I’d wager that they infuse their liquors in-house, which is always a plus. It smelled amazing. The flavors combined to give the drink a floral element as though St. Germain’s was involved, and the chile had a Thai pepper or serrano bite rather than jalapeno, which was unexpected. The heat built with each sip.

The bread served before dinner was interesting because of the accompanying dip. 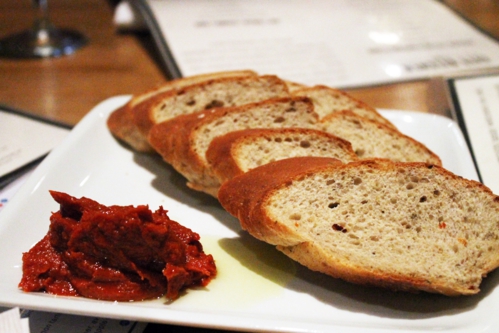 It was essentially tomato paste with curry spices, which was daring but I’m not sure worked. One of our companions succinctly said, “It’s like pizza.” The bread itself had a comfort food appeal due to bouillon flavors baked into it.

For entrees, my husband and I split two of the night’s specials. The first was a flatbread pizza with duck confit, goat cheese, and caramelized onions. 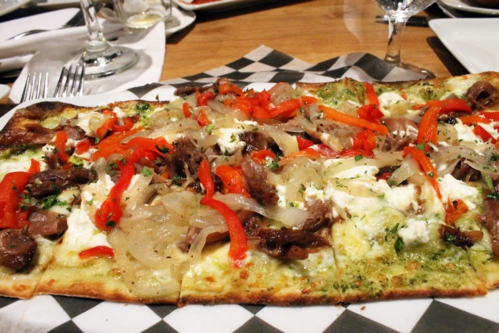 Overall, it was a good pizza with pesto for the sauce and tasty roasted red peppers joining the flavor smorgasbord. The duck was very salty, however, and the pizza itself was extra charred in spots though too soft in others. Our next dish had the same quality control issues. 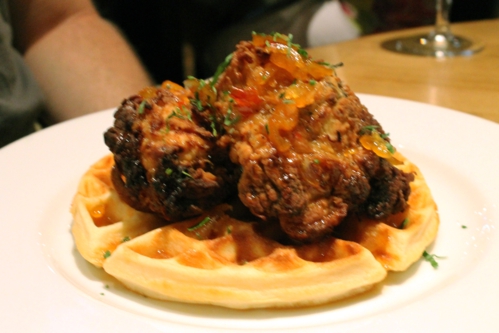 It was chicken and waffles with a rosemary syrup and kumquats. As you can see, parts of the chicken were fried to more of a burn than a reddish-brown, but the meat did not suffer from it. It was juicy and satisfying, though I don’t think the combination with kumquat worked, though it was adventurous. The waffle was nondescript.

At this point in the meal, I switched drinks to the tejito made with tequila, cucumbers, lime, and agave. 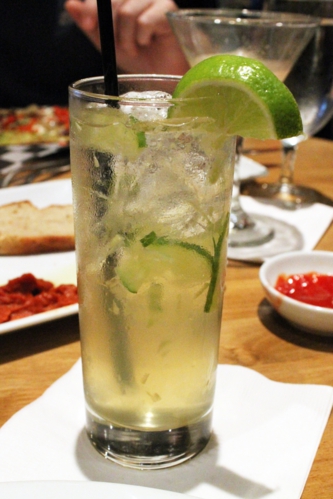 My first impression was that it was too sweet, but that may just be the bolder flavor of agave compared with sugar cane. Otherwise, the cucumber flavor had a strong and welcome presence, and it was balanced well.

City Kitchen also has a sister hamburger café inside the mall called Village Burger, and if their burgers are anywhere near as good as my friend’s this evening, it’s worth trying. She had the CK Burger, which comes with glazed tomato jam, bacon-onion marmalade, cheddar, and green peppercorn mayonnaise. 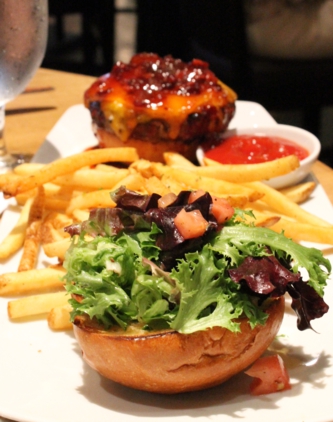 That’s certainly one of the prettiest burgers I’ve seen. I was worried all those condiments would make it too limp, but she gave it high marks.

Finally, it was time for dessert. 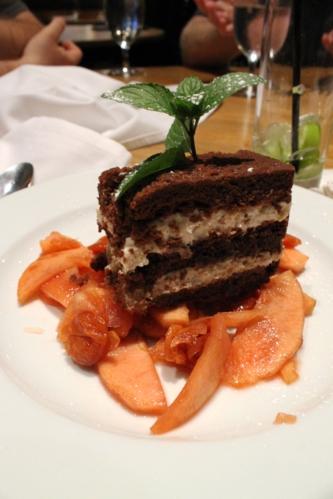 It was described as an apple chocolate torte with fruit compote, but flavorwise, it was remarkably similar to a tiramisu—I think that’s a sign of alcohol’s involvement somewhere in the assembly process. The cake tasted of coffee and wine. Although not what I expected, it worked quite well, especially when eaten with the apple slices and their pungent spices.

While it’s obvious that City Kitchen is copying the unpretentious, yet somehow still pretentious, bistro trend, that’s not a mark against it. More of a problem is the quality control issue, but even then, we found plenty to enjoy about each dish. It’s worth a visit, and I was eyeing a wine dinner menu as we left. Village Burger is also now on my list of spots to try soon.