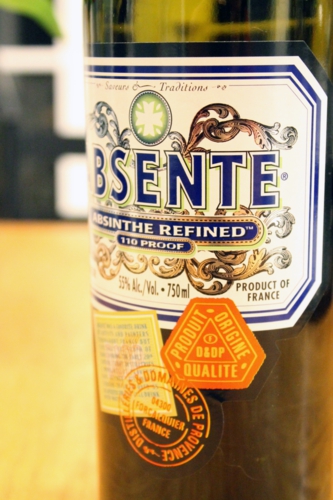 This is a pretty darn expensive absinthe at $60 according to my husband—it was a birthday present. It’s from France, but the fake import stickers on the label are off putting. If they are from France, they don’t need to play at it. However, my doubts are quieted as I drink it and discover how good of an absinthe maker this is. The color untouched by water is neon green. 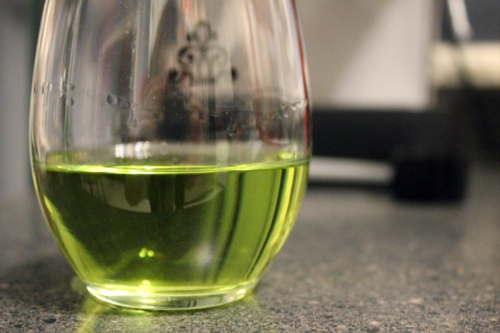 It tastes strongly like a Good-N-Plenty in this state. That means it’s also a bit sweet, which I think is a good thing for a strong spirit like absinthe. 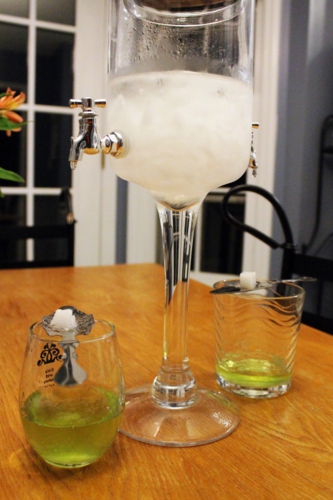 After the dripping process, the smell is much subdued. 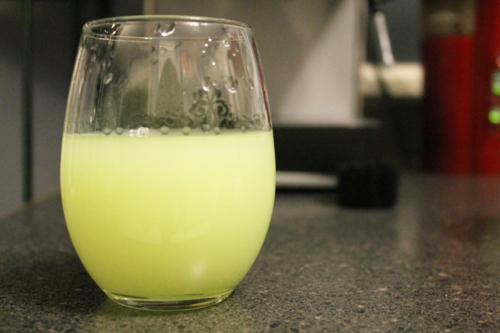 It has a mellow licorice taste—okay, mellow for me, which is probably way too strong for most of y’all. I think it tastes like a licorice-spiced whipped cream, and I love it. Smooth is good when you’re drinking absinthe. So is that giggly absinthe tipsy.

Overall, Absente is not nearly as overwhelming as the Lucid I reviewed a while back, and that’s a win for me.

Very thin, hardly any taste at all. But the anise is slightly noticeable, a hint of wormwood too. Not impressed at all. A very boring absinthe. Stay away from this one. … Uninteresting. To say something nice, it is not tongue-numbing. It can be swallowed. Very disappointing. Like Pernod pastis (here, too) but sweeter and not even that herbal if one could say that of Pernod pastis. Absente is neither absinthe nor a liqueur that can be taken seriously. It could have some use in cocktails or neat as small shots served cold. But for this purpose there are better and more herbal drinks available.

Anise is very prominent; the southern wormwood used in the mix does give it a bitterness. The tongue doesn’t go quite as numb as with other absinthe I have tried. … Louched aroma: Still dominated by anise, with some strange, citruslike hints. Louched taste: Again, the anise is incredibly present. The bitterness is only a subtle hint as the wormwood, equally subtle in its presence, is almost negligible. … This was actually the first absinthe I ever tried, and while the ingredients are apparently a little sketchy, I still have fond memories of it. As a result, for people who want to ease their way into the taste of proper absinthe, I recommend this as a first step. Those who want the real thing will have to look elsewhere.

The Gourmez’s reaction: So I guess the absinthe water and sugar-cube ceremony is called louching the absinthe. I learned! Also, apparently I need to try more absinthes, but in North Carolina, that’s not as easy as one might think. Darn you, ABC stores and your limited selection!