The Roxy hosted a bourbon tasting the night before my birthday, and bourbon is something I’ve definitely grown to love during my time in NC. And let’s be real — I’m down for tasting any sort of alcoholic beverage. This was the first time I went to a bourbon tasting, although I did LOVE the bourbon dinner that Jujube held a few years back in which I tried a bacon bourbon cocktail for the first time. But that was spread out over several dinner courses. Bourbon tasting at the Roxy is a more casual affair with chips and salsa and some cheese pizza strips as snacks. 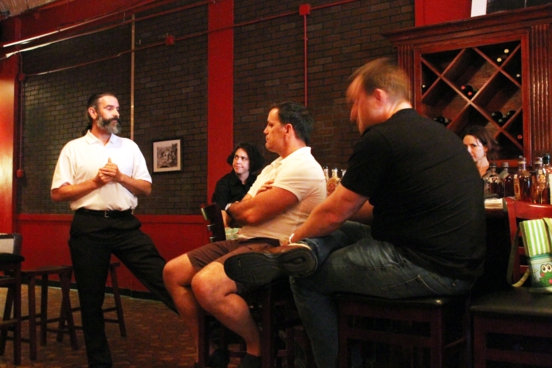 That’s Chris Houldsworth on the left from Republic National who talked us through the tasting. We tried a total of four bourbons and learned plenty about the spirit in general. There was a group of around 20 people drinking together, and it was a friendly crowd, skewing toward the forties in age. Here’s what I learned:

Now on to the shots! I don’t have many pictures because it was dark, and well, bourbon really just looks like bourbon for the most part. We started with Elijah Craig 12 year. Elijah Craig, Chris told us, is the largest holder of bourbon in the world. Also, bourbon’s very popular in Japan. Elijah Craig is a top seller there. 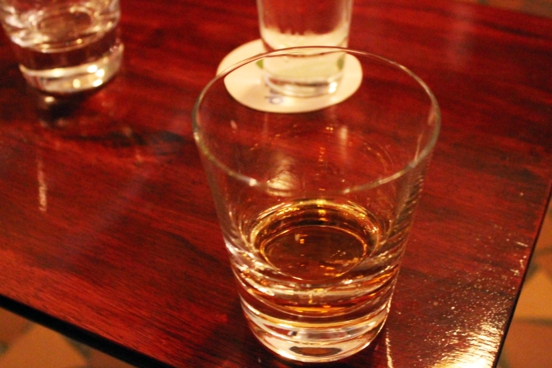 Buttered popcorn leapt to mind when I smelled it. It tasted much the same but with a little bit of film to it and the addition of caramel. I thought it was lovely, but it did not compare to the Elijah Craig 18 year, which we tried next. The difference was pretty strong in terms of smoothness. The color was redder, the nose lighter, and vanilla came into play. It was the first one I tried with a little spring water, and that did open up the layers, letting some floral and spice come out. Chris convinced me to go out and buy a bottle because Elijah Craig will soon be running out of their 18-year stores.

The third bourbon was Four Roses, and we learned that it used to be considered top quality straight bourbon until Seagram’s shifted the brand midcentury. It then became a blended bourbon and developed a lesser reputation to go along with the change. In 2002, Kirin bought it, and the name is now reattached to a nice quality straight bourbon, so don’t let that old reputation fool you. 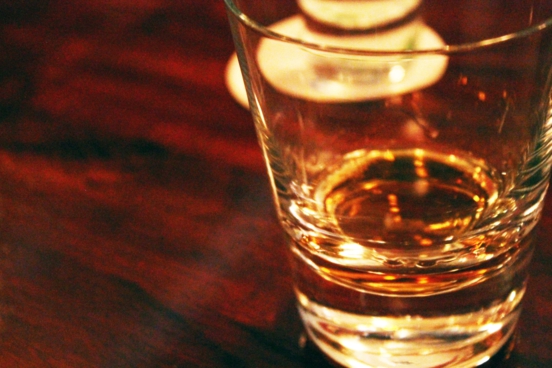 The smell was super mellow. It was thinner than the first two and had less depth, but that’s not a bad thing depending on your mood. It was golden in color and hinted of vanilla, leaf, and cream.

It was at this point that I realized my taste buds were dead after three shots of bourbon. That should be a check in the con box for bourbon tasting generally, but by the time another comes up, I will probably have forgotten. Our fourth bourbon was actually not a bourbon at all because it’s 51% wheat and 49% corn: Bernheim Original Wheat.  No pictures, and my notes consist of “It does have a different quality, more …” Yep, I never finished that thought. Oops. I can say I liked it, but I’d take bourbon over it any day unless I’m just in the mood for something different.

My tongue was screaming that it was done, but then Chris offered tastes of Concannon Irish Whiskey! Like I can say no to anything — and I mean anything — that I haven’t tried before. It’s made by a Californian winery in partnership with an Irish distillery. The whiskey is aged in both wine barrels and bourbon barrels. Historically, I am not a fan of Irish whiskey or Scotch, but I liked this one, and that’s high praise as far as I’m concerned. It’s also all I can remember about it. If I couldn’t take notes on the Bernheim, you can bet I wrote down nothing once the Concannon came around.

So how was bourbon tasting at the Roxy? Pretty darn informative, I’d say. I already love the relaxed atmosphere there, and it was nice to try a variety of bourbons and whiskeys with a friendly group of fellow imbibers. However, I’m not sure that bourbon lends itself well to a tasting that doesn’t also include a meal and several hours for taste bud recovery. But like I said, I’m sure I won’t let a little thing like that stop me in the future.