The End of 2011 Absinthe Cocktail Challenge

As you may have heard, we rang in 2012 two weeks ago. Crazy, right? Crazier is that I unexpectedly ended up hosting some friends at our place to celebrate and was reminded by one of them that there was a challenge on the table.

You see, two friends, Steve and Chris, have this habit of facing off over cocktails. They each have their specialty drinks, usually ones that’ll please the ladies. For Chris, that’s the Girl Scout Cookie, and for Steve, that’s the Caramel Apple. Those have both made appearances in their past competitions, along with a variety of other crowd-pleasing drinks—I remember a 4th of July competition that ended up in red, white, and blue concoctions all over the place. Both men have been evenly ranked in those competitions, but you see, I throw a bit of a wrench in their standard operating procedure. I’m most assuredly a lady—okay, I honestly prefer chick—but I’m much more inclined to stronger, more classic cocktails than the sweeter ones typically associated with the female taste. And I have a thing for absinthe. I won’t even pretend it isn’t related to imaging myself as an American ex-pat writer in 1920s Paris.

Needless to say, I’ve talked up the need for Chris and Steve to compete in an absinthe mixology challenge for months, and this New Year’s Eve just happened to provide the perfect opportunity. With only a day’s notice, both Steve and Chris accepted, and the competition was on. 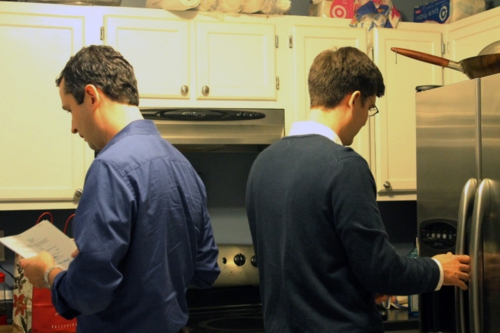 The competitors, back to back in my kitchen.

NV Absinthe Verte was the absinthe chosen for the competition, because, well, I had it on hand. It’s not my favorite absinthe, but we don’t have many choices here in NC, and the Pernod Absinthe, which I do prefer, is around twice as expensive. Steve and Chris mostly used ingredients in our alcohol cabinet, which is really more of an alcohol stand—yes, I’m proud of my collection and display it. Some shaking and stirring later and the first two competing drinks were ready. 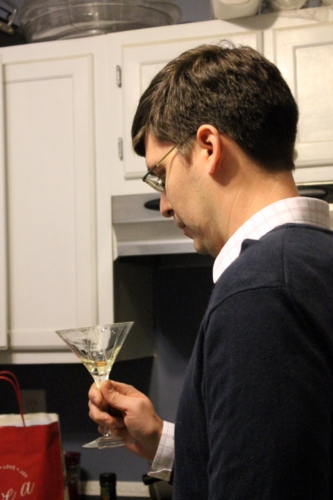 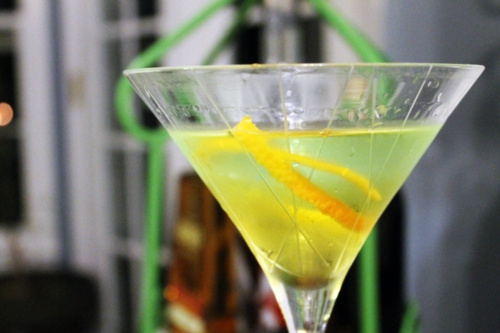 This was my absolute favorite drink of the evening, which is especially noteworthy because I’m not a big gin drinker, and gin was the base liquor. Yes, I’m a sucker for presentation, and the lemon peel just looked lovely in that glass. But the taste was perfect for me: strong, but without an overpowering absinthe presence. My other two judges disagreed, finding it pretty unappealing. For the record, they were both men, and they both preferred the sweeter drinks this evening. That means I’m badass, right? 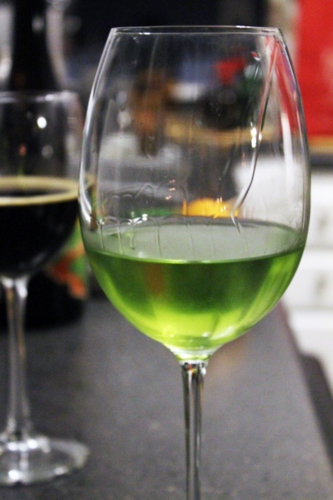 Chris’s 1st entrant, a Scottish Licorice, emphasis on the Scotch.

The coloring of this drink was beautiful, of course, and it was fairly simple cocktail. I thought it was lovely, but Steve won this round for me. 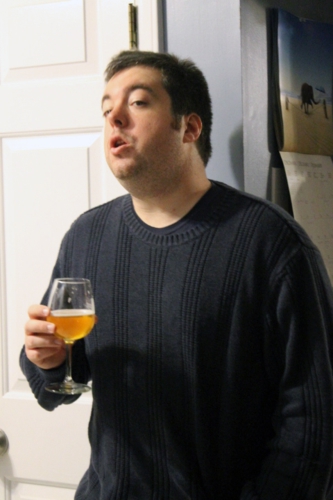 My husband, Judge 2, in between rounds.

Round 2 began right away, and I’d call it the fruity round of the competition. 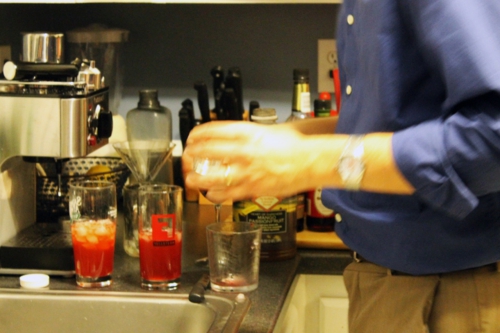 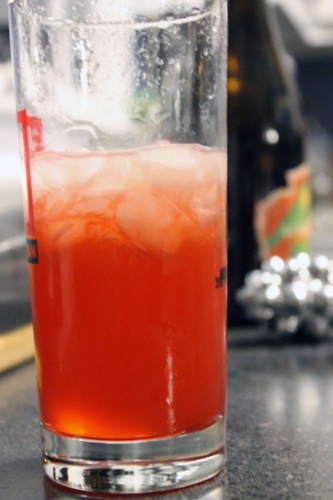 That second cocktail, the Wharf Rat.

For me, this had too much fruit but Judges 2 and 3 LOVED it. They really, really loved it. I was reminded of Hawaiian Punch; they were reminded of heaven. Steve’s cocktail, once again, pleased my palate better. 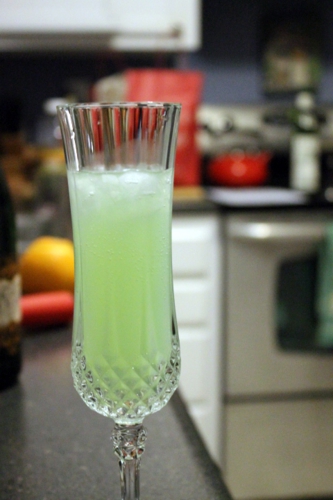 The Hemingway, a champagne cocktail.

The Hemingway was a simple recipe, and for me, it tasted smooth and classy. Judges 2 and 3 were somewhat bored by it, I believe. Such uncultured blokes. 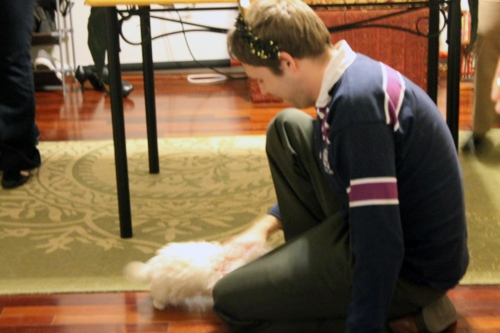 Judge 3 saying hello to the most exciting visitor of the evening—Millie, a toy poodle and Pekingese puppy.

Two rounds was the intended competition length, but adding up all three of our scores resulted in a dead heat. We pulled those two cocktail makers away from their avid Ryan Seacrest viewing to come back and mix up a third drink, completely unprepared.

Round 3–updated because, well, three rounds of absinthe makes my memory fuzzy. 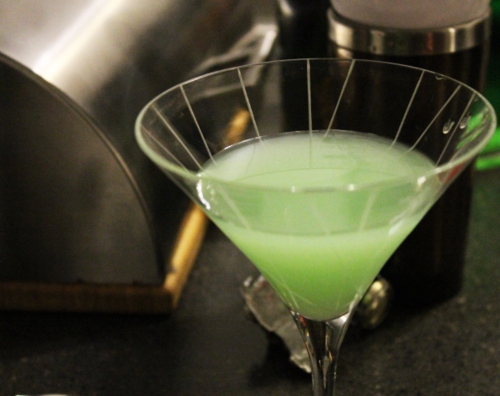 (ETA, Here is where my memory gets extraordinarily fuzzy.) The Absinthe Frappe was Chris’s final entrant, and at least two of us liked it a lot–I honestly can’t remember why anymore! I remember making up a batch of club soda to aid Chris in his mixing, though. 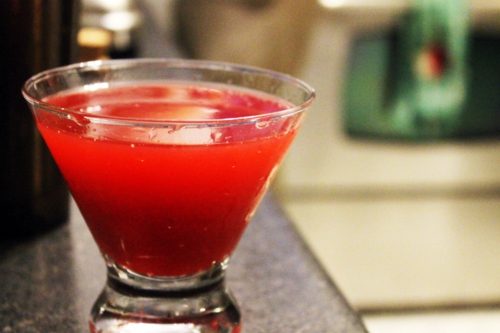 The Absinthe Morning, created by Steve on the spot, with fresh blood orange juice.

The Absinthe Morning, a brand new creation by Steve, is what I remember most in the final round. It was fruity, but not in the strong way his previous drink had been. Instead, the absinthe cut through the fruit, creating a nice balance between them.

, I believe Steve won my vote yet again, but Judges 2 and 3 opted for Chris’s Absinthe Frappe instead, and thus, we were able to crown a winner . . .  Chris, by one point!

What did I learn? An absinthe challenge is a super fun way to celebrate the new year, in case anyone’s planning for next year already. (ETA, and also, I should run my facts by the challengers before putting up a blog post.) Personally, I’m trying to think what the main ingredient for the next match up of Chris and Steve’s skills should be. Any suggestions?

5 thoughts on : The End of 2011 Absinthe Cocktail Challenge