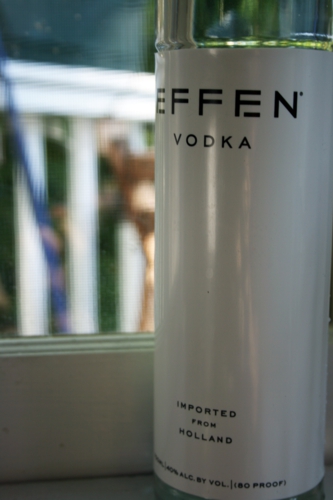 Who can resist a name like that? Not me! I’m tasting this vodka chilled because I can’t contemplate drinking warm vodka by itself, even though warm beverages have better flavor profiles (see how much I’ve learned in the 5 years I’ve been doing this blog?). So my taste buds may be handicapped, and I accept that. I’ve also never really tried to taste a vodka before, so this’ll be an adventure!

I didn’t expect to pick up a nose at all, but there’s a mild one of almonds. Not a bad start. It reminds me a lot of the Catdaddy Carolina Moonshine, actually, but with much more subdued flavors and very little spice. I enjoy sipping it, though it’s got plenty of heat. It’s a little creamy with some almond notes, plus you can actually taste those flavors before the alcohol rushes in on you. After that, a metallic flavor settles in followed by a quick burst of cayenne.

My imagination may be running away with me here, but I’ll drink it again regardless.

Aftertaste: 2.2 – This is one of the many places where this vodka shoots itself in the foot.  The initial taste isn’t terrible, but then you wait a few seconds and you are suffering through an effenol burn like nothing you ever want to experience.  I was the only one to find relief in this after taste since an hour before this review happened I ate a double down (a decision I still regret), this vodka dissolved it.

Burn/Smooth: 5.6 – Surprisingly, despite what was said above the actual burn of the vodka came out slightly above average.  It is nowhere near the ideal water-vodka taste, but it doesn’t go down as hard as other vodkas like Gordon’s or Smirnoff.

Aroma: 2.7 – “Paint thinner, with an ode of nail polish and acetone. Not pleasant.”

Note from the Gourmez: Obviously, we were not on the same vodka drinking page! Worth noting, though, is that my search mainly came up with blogs on the nice design of the brand and bottle and very little on its merits. Apparently, they have a cucumber vodka, too. I’ll have to seek that one out sometime.