When my family was in town, I had the chance to participate in a very important event for any Durhamite—I went to Dame’s Chicken and Waffles for the first time. 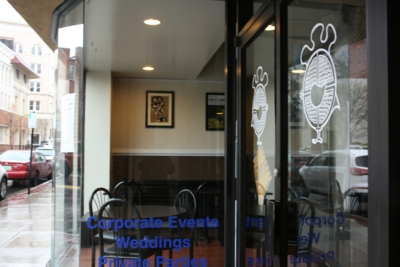 Note the chicken made of waffles logo on the door. 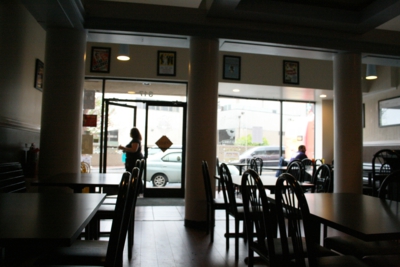 This cafe, reorganized from a previous incarnation as Blue Mountain Catering to focus on their chicken and waffles, has garnered so many rave reviews in the last year, that it was in danger of not living up to those silly expectations of mine. When I looked at the menu, I feared things would turn out that way—-a few of those reviews have mentioned how good of a deal the food is, and at those high-looking prices for a Southern staple, I had my doubts it would be. Well, folks, I couldn’t have been more wrong. And I couldn’t have been happier about being wrong, either. 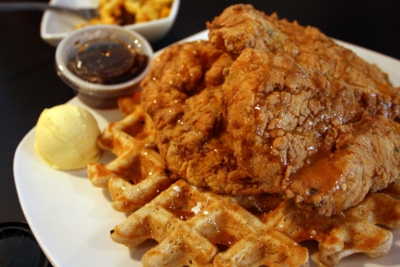 Now that’s a plate of food worth every $12.25 I spent on it. It was the Buff Brahmas with two fried chicken breasts served on a regular waffle. A whiskey cream sauce was drizzled on top that added a light, sweet flavor to the chicken. One bite of that chicken, and I was in heaven. It was so juicy. I have never had such a dense, tasty fried coating before and it was born to be dipped in maple syrup. I honestly don’t know if another fried chicken coating can come close (yes, chefs, feel free to take that as a challenge—-I promise to try your crust impartially, or at least hungrily). The waffle was cooked to a nice crunch without being dry and went so darn well with the chicken and cream sauce. The peach and apricot schmear simply supplied a little lubricant to wash it all down. Its flavor could have been stronger, but the dish was already so delicious, it really doesn’t matter. And yes, I could only eat half, even though I was in heaven. It was easily two meals.

Just as delicious was the side that came with my dish. 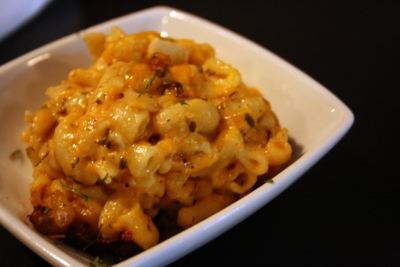 Oh my word, that’s the best mac and cheese I’ve ever had. Buttery, full of tasty cheddar and the perfect herb combination, and baked perhaps a little past a golden-brown crust—all the better as far as I’m concerned.

My sister was nearly as pleased with her Frizzled Fowl. 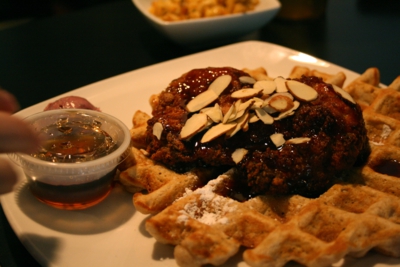 This one was panko-crumb coated, served over a regular waffle with blueberry schmear and topped with almonds and plum sauce. That crust was very different than the fried crust, granular and toasty and every bit as good. The almonds gave a great crunch to the dish, and the plum sauce livened it all up. I can’t speak to the schmear—blueberries are so not my thing—but my sister and my mother both enjoyed it.

My mother had the Red Crusted Rose-Comb and also loved it.  It was a pair of drumsticks on a classic waffle, normally with strawberry schmear but she asked for the blueberry instead. She “couldn’t believe it could go together, and that the syrup on the chicken would be good.  The chicken was excellent.” 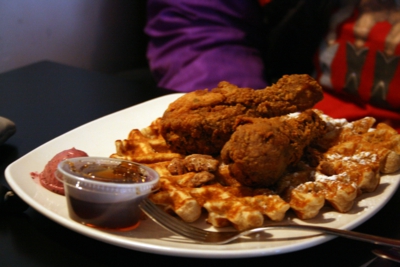 The cheddar grits didn’t impress her quite as much. 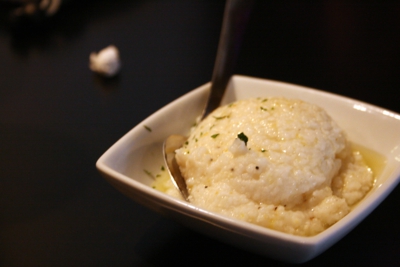 They looked tasty to me, but she preferred her own way of making them at home.

My stepfather was happy with the eggs and grits portion of his Barnyard Honcho choice. 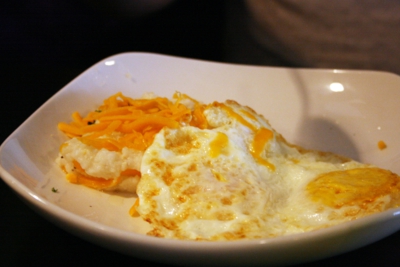 Those came out before his chicken and waffles, and that second portion of the meal . . . well, it reduced him to groans of pleasure. I’m not exaggerating. If we mentioned Dame’s during the rest of their visit, we heard the groans again. He especially loved the sweet potato waffle, which he asked to have instead of the regular, and I must admit, I’d recommend it instead of the regular for any combination. It was not extra sweet like sweet potato versions of baked goods can often be. Nope, it was just sweet enough to give it an extra oomph over the regular waffle. I think I recall mild spices as well.

With four votes of awesome, Dame’s assuredly gets my highest rating. I sincerely hope they can upgrade their “almost world famous” slogan sometime soon.

2 thoughts on : Dame’s Chicken and Waffles